The story you’re about to read comes from someone who sounds like they’re in a really tough situation.

To have to make a decision like this must have been extremely difficult…but did they do the wrong thing…?

Let’s get all the details and see what we think…

Things have never been particularly good or stable, but now we’re at rock bottom. My mother and stepfather are going to be going away for a long time, and everyone is in a rush to get all these kids into homes. I’m the only one who’s over 18, so everyone wants me to do it. I don’t want to.

I’d gotten an opportunity. My grandma on my father’s side offered to have 6f and I move in with her, and even pay for me to go to college. The thing is, she lives several states away. I talked to social services about this, and got the answer that I could move 6f without a problem because our parents were able to voluntarily gave me guardianship of her and I’m her full sister. The rest I could only take in if I stayed in this state because they would be a full foster care placement though.

I’m sorry, but being forced to stay here would destroy my future. I could definitely survive, but I would be stuck in this horrible place working paycheck to paycheck. I could never have a real life. I made the obvious choice. The social workers were nice enough to arrange it to where 6f and I weren’t just standing in front of them during the pickup, but obviously they know exactly why they’re now in care.

The four of them that have phones have been texting and calling me non-stop. Some of them for help, and some to just scream at me for abandoning them. I known the system is going to be really bad for them because of where they are and they’re ages, but I just can’t do it. I can’t blow this, this is mine and 6f’s first chance for a real life, and I feel like I owe it to both of us to take it.

Am I in the wrong here? The kids and my mom think I am, my grandma thinks I should have “done something” but can’t say what and wouldn’t let them in her house even if it could happen. The only person who doesn’t think worse of me is 6f, who says she “likes the quiet”, but obviously doesn’t know the full story.”

One individual said she’s NTA and that her siblings should be mad at the parents. 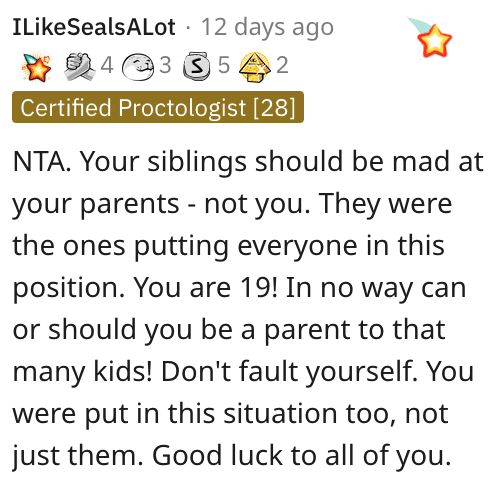 And this Reddit user said this was a ridiculous thing to be asked of this young woman. 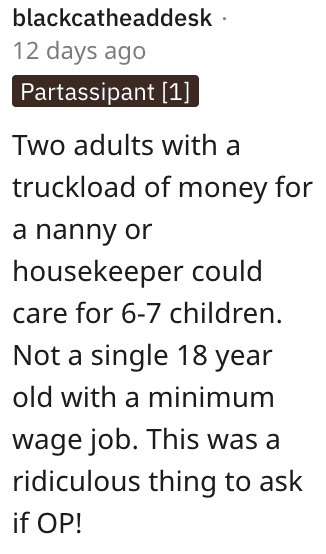 And another individual said this situation is ridiculous and this woman is NTA.

Read Also:   People Share the Non-Traditional Beauty Standards They Are Attracted To