Would You Ever Call CPS On A Friend?

I can’t imagine ever being put in the position where I had to make a decision on whether or not to call the authorities on a friend due to their parenting, and I truly hope I never have to find out for sure what it’s like.

This woman and her partner found themselves in a situation just like that, though, which was compounded by the fact that neither of them knew how to handle an infant themselves.

It began when two couples were drinking and Face-timing and decided they might as well continue the fun in person. OP and her partner grabbed some drinks and headed over.

I (27F) and my partner (29M) had had a long day after work and decided that we were going to have a glass of wine at home. I had a FaceTime call off a friend (let’s call her Lucy) of mine (34F). She was with her partner and we were all having a laugh over FaceTime.

It was about 11pm at the time, and Lucy asked if we wanted to go to there’s for a few drinks! We both agreed and I said I would pick up drinks on the way and I would see her there.

Once they got there the female friend was alone and there was evidence that plenty of drinking had already occurred – and when OP realized her friend’s young infant was in the house, too, she became uncomfortable with the partying plan for the evening.

By the time we had got there, Lucy was on her own. Lucy let us in and we were chatting and having drinks. I had seen on the side that there was 3 empty bottles of wine there from before we had even arrived.

Next thing I know – baby crying. Lucy’s 6 month old daughter was upstairs. So she brings her down.

I immediately stopped drinking. I didn’t want to drink when there was a baby in the house? However my partner and Lucy continued.

At some point the friend decided to go out for a bit and asked OP if she would watch the baby. OP agreed on the condition that her friend would be back soon, as she had no experience caring for babies.

Anyway about an hour passes by and Lucy said she needed to nip out for 15 mins and rang a taxi, I asked where she was going and she said she’s just going to meet someone, she will be back soon, would I mind looking after her daughter?

I said obviously I didn’t mind but as long as she came back.

She called her friend after several hours but they were never able to communicate well, and by 7am, she and her partner were struggling, the baby was in distress, and they had no idea what to try next – so they rang the police.

Lucy left, an hour past, tried to get hold of her and I managed to get through, she proceeded to ask me if I could ring her a taxi and said some address that I didn’t hear because she was so drunk. I asked her to text it me and she didn’t. I didn’t hear from her again that night.

40 calls later and by this point its 6 am and the baby has woken up and is screaming. Me and my partner don’t have kids so I didn’t know what to do. I couldn’t find nappies, she’s on formula, it was a nightmare.

In the end we waited until 7am and tried to comfort the poor baby. She wouldn’t stop crying. It got to the point where I said we needed to ring the police, police came over and tried to contact and couldn’t get through.

Eventually they got in touch with the baby’s father, who came to pick her up. The police took a statement from OP and her partner, and THEN the mother rang panicked about where her baby was (this was the next morning).

We managed to get in contact with her father over Facebook etc. it got to 8:30am and I received the message ‘where is my baby?’ I told her what happened asked where she was – nothing. She just kept repeating where is my child. The father then came to pick the child up and I explained the situation.

The police asked for my account of what happened and we were told to drive home and if they needed anything else they would call.

The father has since taken the friend to court and gotten custody of their daughter, and the friend blames OP for everything that happened.

OP thinks she did the right thing but is feeling guilty since her friend essentially lost her kid – should she, or not?

The father has since taken her to court and she hasn’t seen her child in 6 months. She messages me every now and again from a new number asking me if I’m happy and I’m the reason she’s not got her child. It’s getting to the point where it’s harassment. I’ve blocked her on everything yet she still finds a way.

I can’t help but feel so guilty incase I did the wrong thing.

Top thought? This is a woman who needs to take responsibility for her own actions. 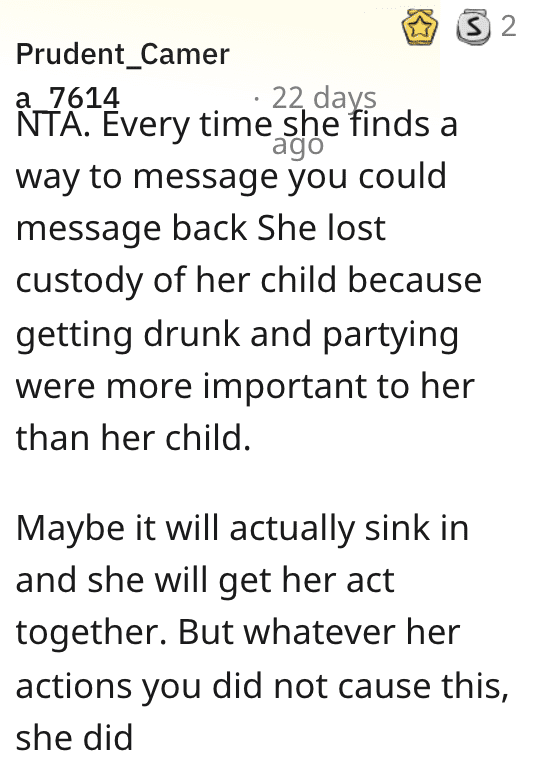 There is likely a lot more to the story. 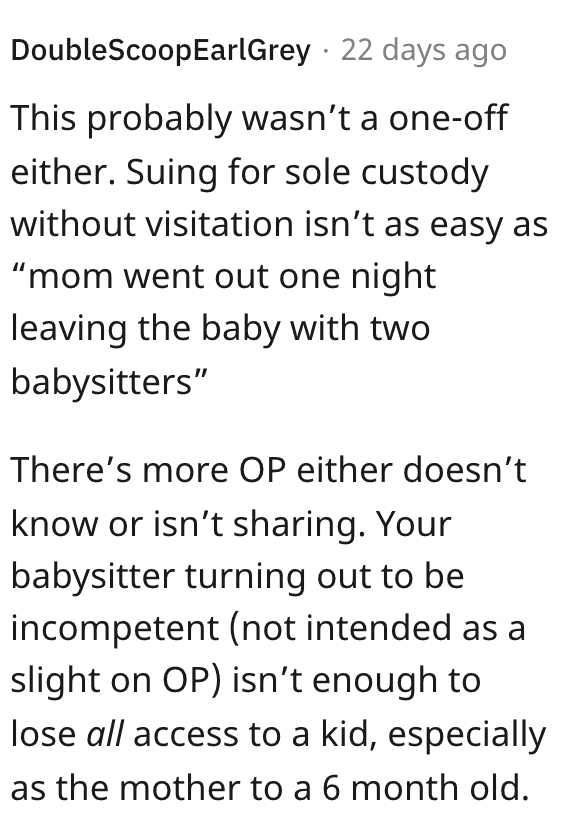 Most people were not on board with OP’s kind take on the matter. 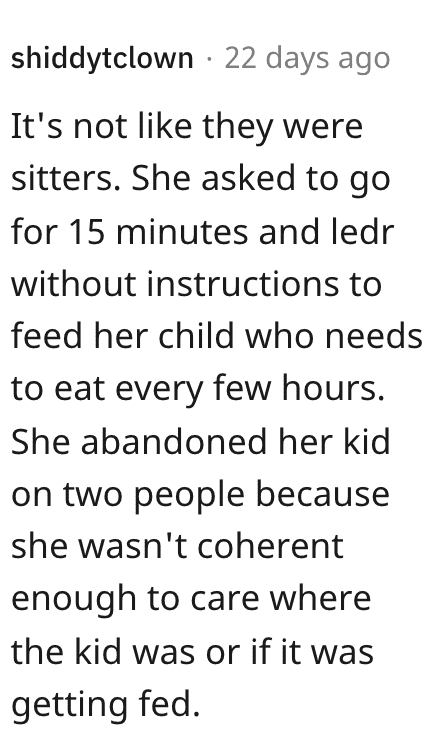 This is not a woman who is ready to have charge of a child who needs constant attention and supervision. 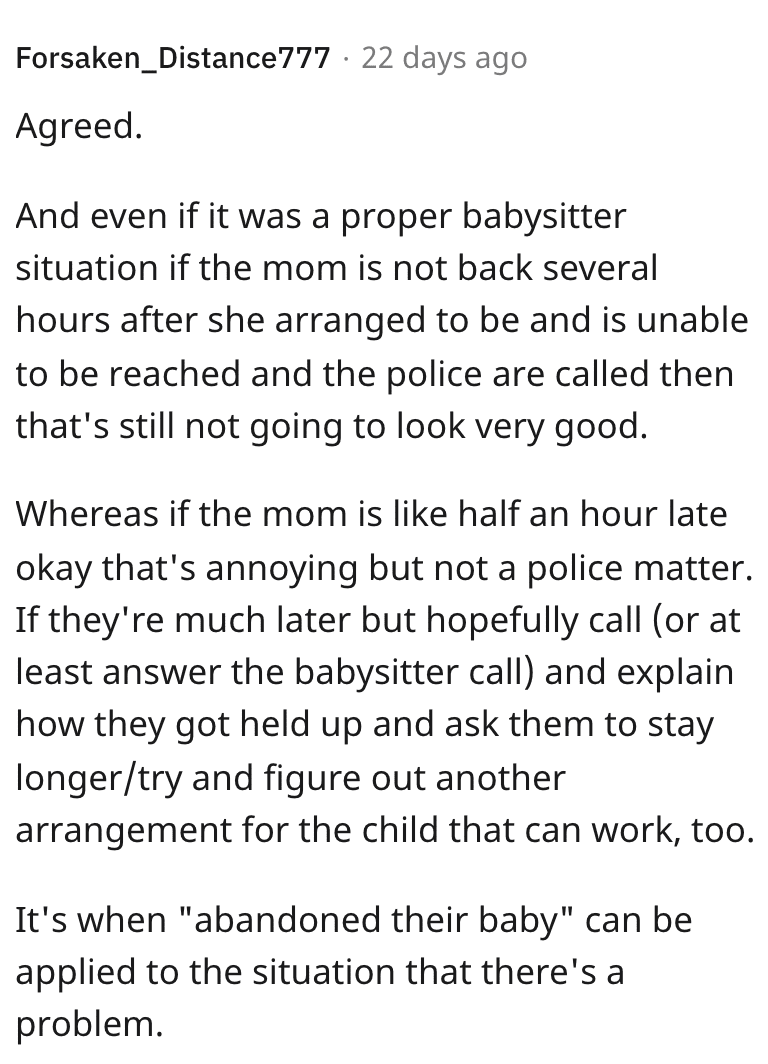 The situation is just sad, no matter how you slice it. 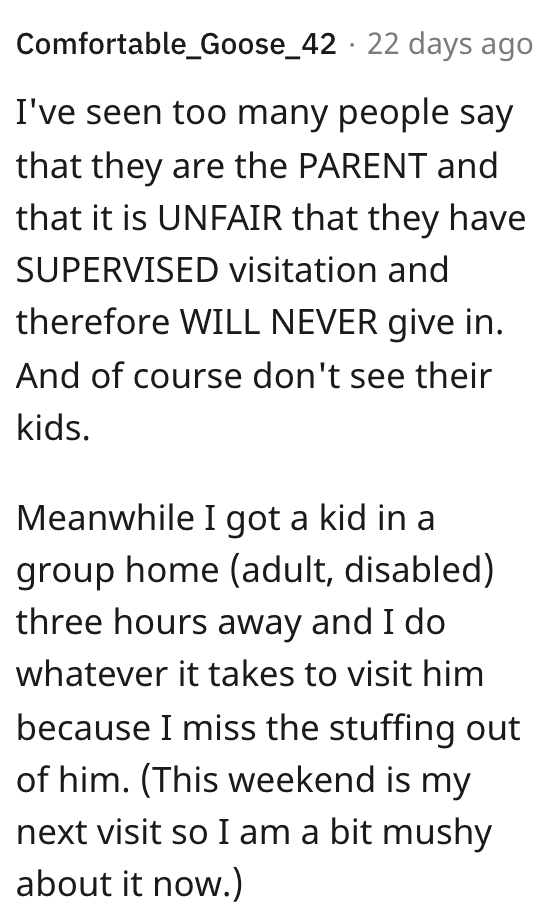 Y’all I hate everything about this story but I don’t think OP did the wrong thing.

I just hate that kids have to deal with parents who just can’t handle the responsibility, but I know it happens every single day.

What would you have done in OP’s shoes? Tell us in the comments!