Would You Agree To Babysit Even If You Didn’t Feel Comfortable? A Woman Refused And Wonders If She Made The Right Decision.

As a kid, I read The Babysitter’s Club and thought that being paid to hang out with other people’s kids was where it was at…until I actually did it a few times and realized how much work kids actually are.

Even now, as an adult who has kids, I would only offer to babysit for people I really and truly loved, because…yeah. And I wouldn’t take kindly to anyone assuming I would be willing to watch their little beasts without warning, either.

That’s exactly what happened to this woman, though, when she thought she was visiting an old work friend only to find she was actually a last-minute babysitter instead.

A few weeks ago, my friend Wendy (29F) invited me (25F) over to her house for lunch. She is a single mom with two kids, ages 5 and 3. Wendy and I are not super close. We met at an old job and have hung out a few times before, just casual things like grabbing dinner after work. This was the first time she has invited me over to her house.

When I arrived, her kids were screaming and racing around. The younger one slipped on the rug and started crying when I came in. The older one seemed to be taunting her and “play-whacking” her with a doll. Overall, it was a chaotic atmosphere.

When the friend “realized” she didn’t have the tomato sauce she needed she asked if OP would stay with the kids for a few minutes while she popped out to the store.

OP didn’t feel comfortable, so she offered to go to the store instead.

Wendy told me she had forgotten the tomato sauce she needed for the pasta recipe she was preparing. She said she was going to pop down to the store to grab it and would be back in 15 minutes.

I hesitated because that would mean I would be alone with her kids, so I said that I could go to the store and get the sauce since she was busy with the kids.

At that point the friend insisted on going herself, because there might be more things she needed to pick up as well.

OP got nervous because she doesn’t have kids and doesn’t know how to take care of kids, but when she tried to tell her friend all of this, her friend got annoyed.

She refused and added that she might need to pick up a few more items other than the tomato sauce, so it would be best if she went. I told her I wasn’t comfortable being alone with her kids since I had no idea how to take care of children. Plus the kids weren’t just quietly watching TV – they were literally running around the house, tripping over each other, and play fighting. I have no children and don’t know the first thing about taking care of them.

She repeated it would be 15 minutes tops and that I would be fine. I challenged that and said there was no way it would only take 15 minutes. What if there was a long line up at the cashier, or she had to wait for parking, etc. Her statement that she needed more than tomato sauce also implied she might take longer shopping than 15 minutes. She started getting annoyed then and said something along the lines of, “Why can’t you just help out?”

When the friend was clearly getting ready to leave anyway OP grabbed her shoes and ran out the door apologizing.

I was getting panicked about being left alone with the kids. As she started putting on her shoes, I quickly put my shoes back on too and ran out the door. She started screaming at me, telling me to come back.

She’s wondering now if she overreacted and should try apologizing again.

I was pretty frazzled and didn’t want to hang out with her anymore, so I just said, “Sorry, I have to go,” and got in my car and drove away.

Afterwards I texted her to apologize for leaving, but I really wasn’t comfortable watching her kids alone in case they got hurt. She has not responded since then and it’s been 3 weeks.

AITA for overreacting and refusing to watch her kids alone for “15 minutes”, subsequently leaving the hang out instead?

What does Reddit say? I honestly can’t wait to read the replies!

The imagine might be a little strange, but honestly, good for OP for knowing and sticking to her boundaries. 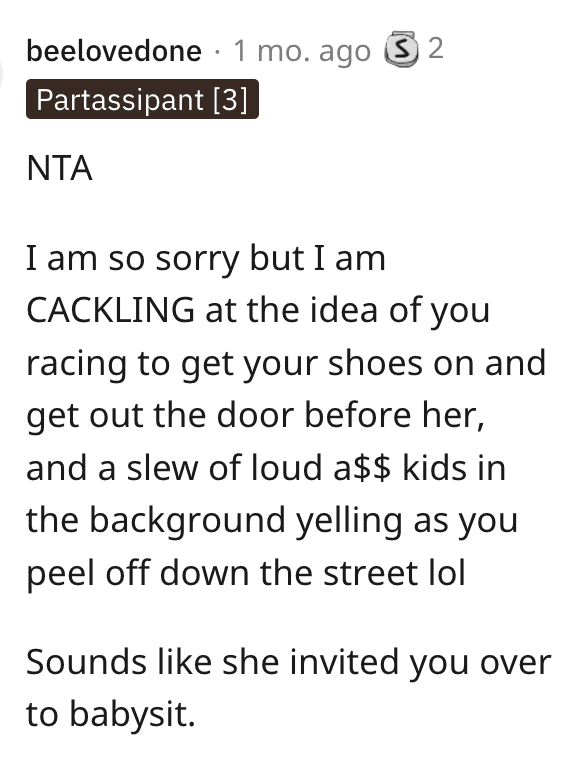 No one would question this logic. 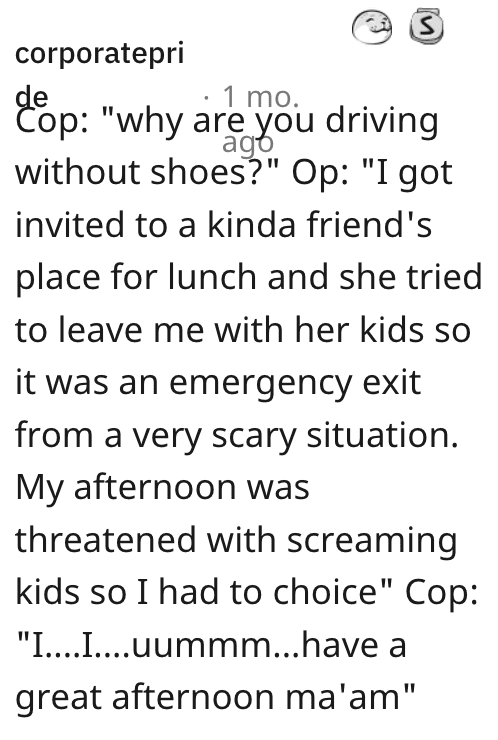 Sometimes the fast exit is necessary. 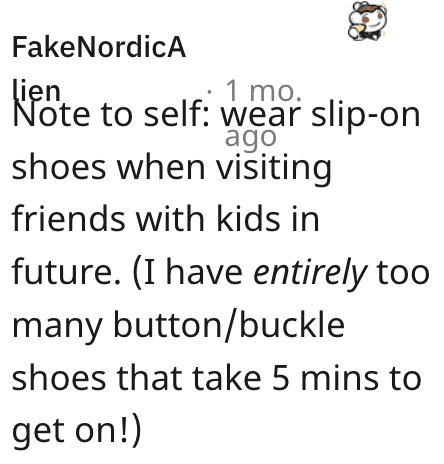 It’s a fair desire, but you can’t force them on someone else. 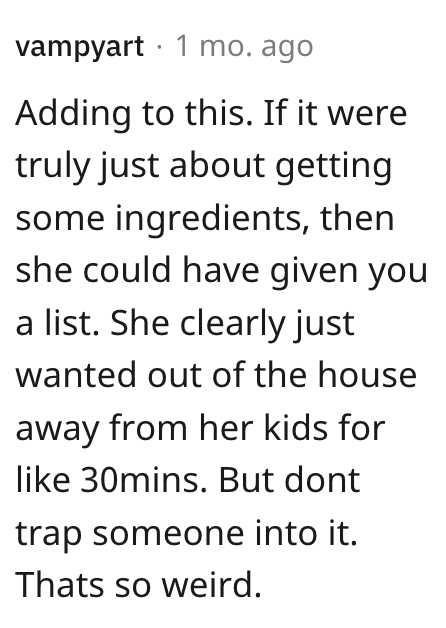 Apparently this is a thing, so beware, people. 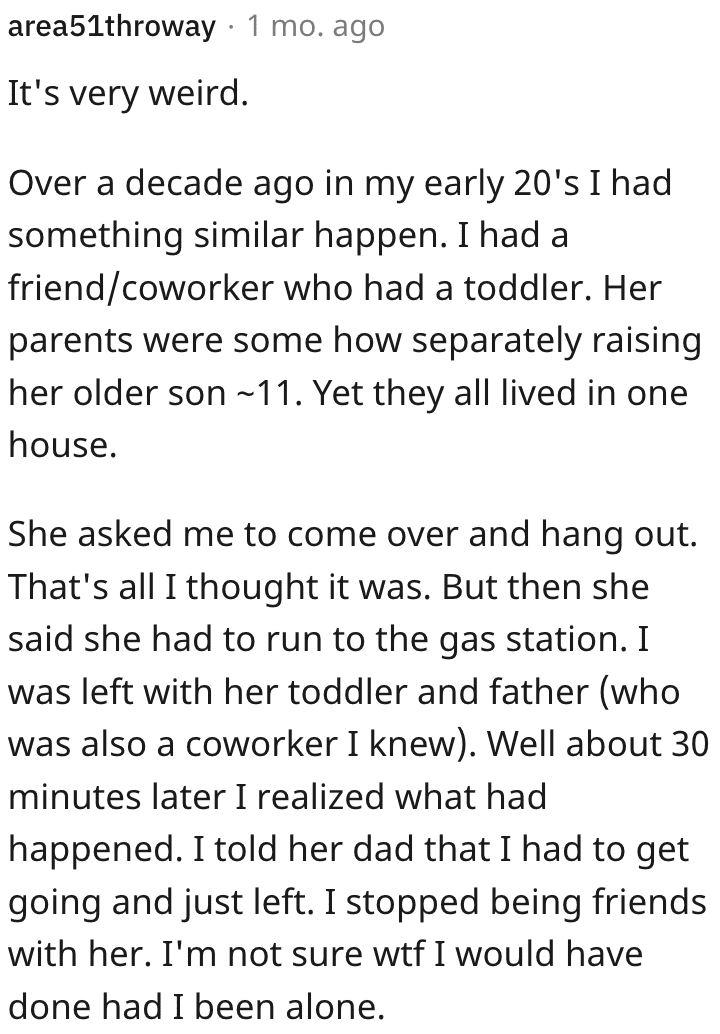 Like I said, I have kids and I would never do this to someone else without asking for a break before they agreed to come over. Putting people on the spot is strange and rude.

What about you? Would you have watched the kids or booked it like OP? Tell us in the comments!