Would They Be Wrong if They Brought Their Daughter to a Childfree Wedding? People Responded.

I’m all for childfree weddings!

Y’all ready for another great story from Reddit’s “Am I the A**hole?” page?

“My brother is having a wedding soon.

The invite he sent to my family specifies that the wedding is child free and 18+. I have 2 daughters (twins). However they have different birthdays due to them being born a few minutes apart (“Jenna” was born a few minutes before midnight and ”Brenda“ was born shortly after midnight).

The wedding is on the day of the Jenna’s birthday, so my older daughter ( Jenna) will be of age while my younger (Brenda) will not. I know it would be disrespectful to bring Brenda to the wedding since she’ll only be 17. But on the other hand, it seems unfair that Brenda will be unable to go while her twin sister will.

Brenda is upset that she isn’t included in the wedding. So WIBTA if I brought her along for the wedding against my brother’s wishes?”

This reader said that they shouldn’t even go to the wedding at all. 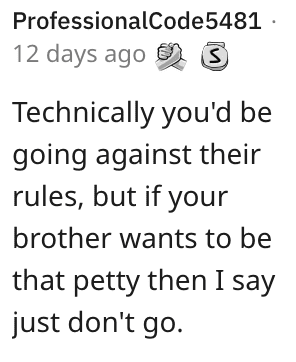 Another individual agreed and also added that rules are rules… 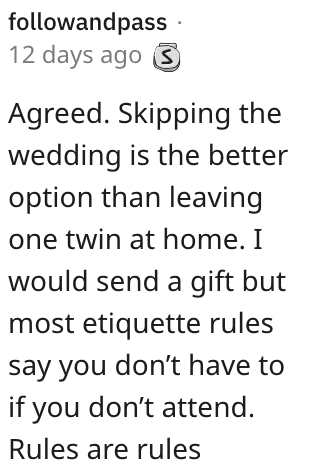 And this Reddit user said her brother is ridiculous and they should make him come crawling back.