Woman Wonders Whether Or Not An Ultimatum Was Really In Order

In general, I think that most of us who have been in relationships know that ultimatums aren’t generally the way to go. They put people on the defensive, which isn’t typically helpful.

Not to mention that, if you make one, you have to be willing to follow through.

This woman has already gone and done it, but now she’s asking Reddit whether or not she’s going to regret it.

The backstory is that her husband and his ex-wife divorced over financial reasons. She believes it was due to her cancer diagnosis rather than strictly money, but since they have a daughter together, they remain in touch.

Her cancer has returned and so they are taking their daughter to visit a couple of times a week.

I f34 have been with my husband m37 for 2 years, he has a 9 year old daughter with his ex wife (Nora) and the reason for the divorce was financial. but she told me he initiated after she got diagnosed with cancer.

Now cancer has come back and I feel sorry for her because she’s a decent woman overall.

Recently the husband and daughter returned after saying they’d waited but never saw his ex-wife, and later that day OP found an expensive bracelet with her husband’s things.

She recognized it as belonging to his ex-wife and confronted her husband about it; he claimed he was keeping it to give to their daughter in the event his ex passed away.

Yesterday he came home saying Nora wasn’t home and he and my stepdaughter had to leave after waiting for an hour. He then went into the bedroom, stayed there for sometime then went out to visit his friend.

I was cleaning the bedroom and found a gold bracelet that looked familiar, I realized it belonged to Nora as I’d seen her wear it before. I was confused I waited til he got home to ask him about it.

His reaction wasn’t good, he lashed out and took it out of my hand saying I shouldn’t touch his personal stuff. I said this wasn’t his stuff this is Nora’s, I asked if he took  this bracelet behind her back and he said no, Nora gave it to him so he could give it to their daughter once she’s 20 in case something happens to Nora.

After an argument he admitted he had taken the jewelry but believed his ex “owed” it to him after he’d paid for her cancer treatments (while they were married).

OP was shocked and appalled.

I don’t know why but I didn’t believe him, I told him I would call Nora to ask her but he started yelling at me to stay out of his family business.

We started arguing and I kept demanding he tell me how and why he got this bracelet. he refused to say anything first, then he admitted going into Nora’s room and taking it while she was out.

I told him this wasn’t okay but he said this was his right after he spent money on her treatment before but never got his money back.

I was shocked by this statement, they were married back then and he shouldn’t expect to be repaid.

She demanded he return the bracelet and confess or she would tell his ex herself what had happened.

I got mad and told him he has 1 day to return the bracelet or I’ll tell Nora and let her involve the authorities if she had to cause the bracelet looked heavy and pricey.

He wants her to stay out of it, claiming their relationship will be damaged beyond repair if she doesn’t.

He begged me to stay out of it but I refused. He said I was being malicious and should side with him not threaten him but I refused to negotiate anything, and I’m responsible for my word now.

Nora is a decent woman who’s struggling and I feel like she should know she can’t trust her own daughter’s father in her home after this.

He said if I go through with this then this will ruin our relationship so badly but I said I’m still standing by my word.

Reddit is weighing in on her snap decision below!

The top comment points out that not only is OP not wrong, but that she should seriously take stock of whether or not to stay with this person she married. 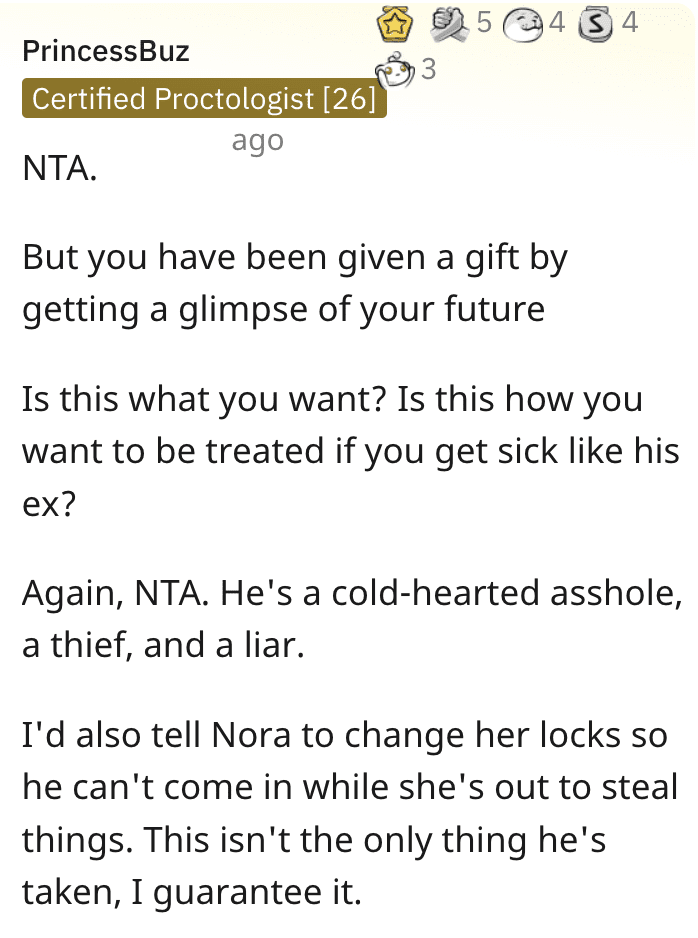 There are so many red flags here it’s hard to name them all. 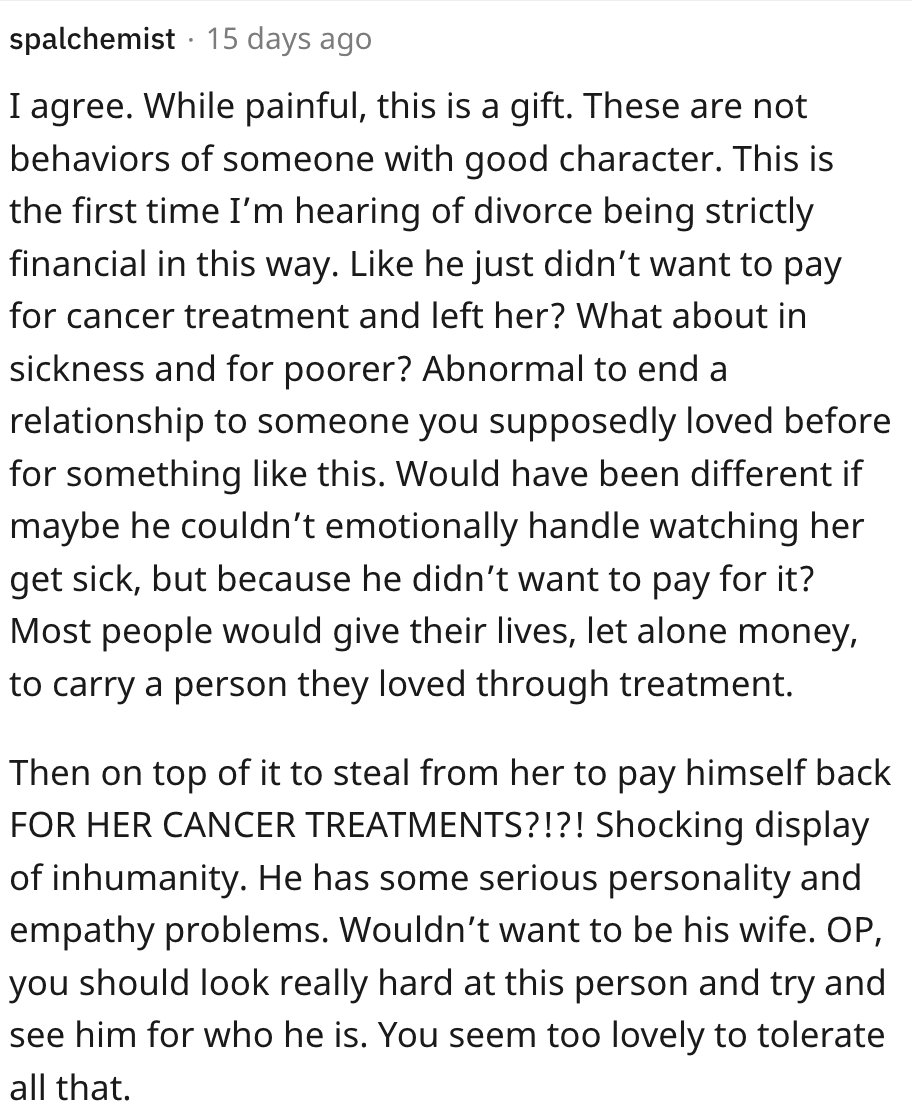 This statistic will never not floor me. 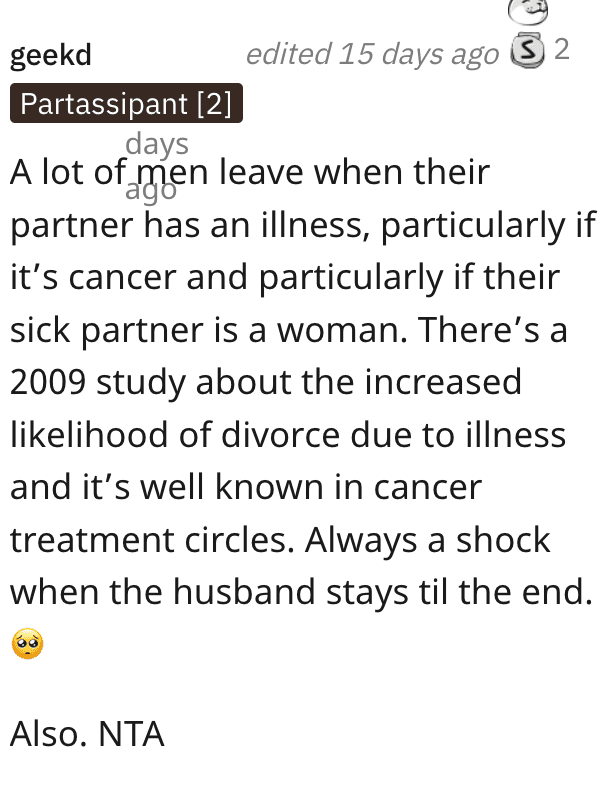 Most everyone thinks this guy seems like a real jerk. 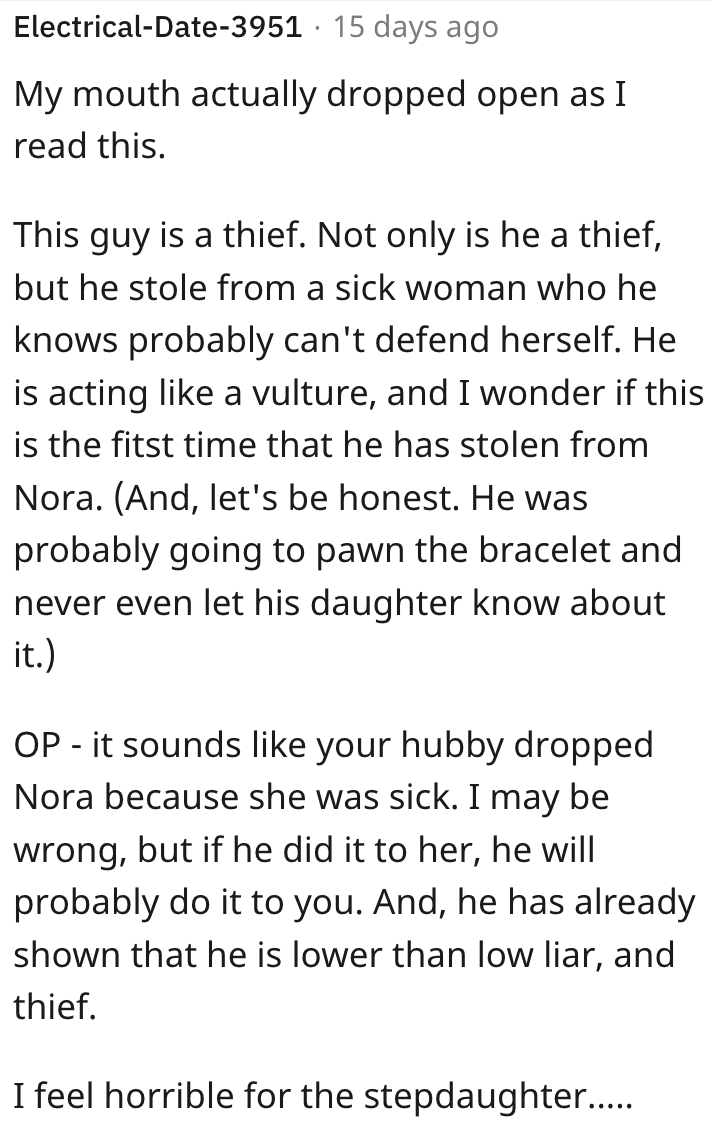 And no one thinks he deserves to be in a relationship at all. 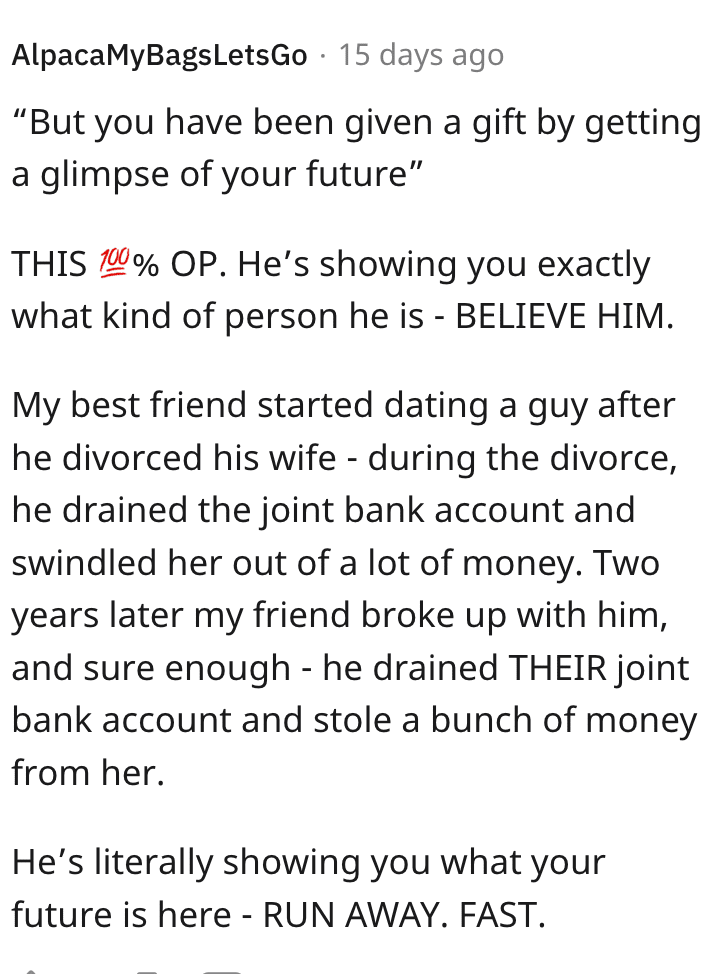 Y’all, I cannot with this trend of people realizing so late who exactly they’ve married. It’s downright scary!

How would you feel if you were this man’s ex? Tell us in the comments!