Woman Thinks Her Brother And His Boyfriend Shouldn’t Wear Rings If They’re Not Really Married. Is She Wrong?

In my experience, anyone who has to begin a story with a disclaimer about how tolerant they are is typically the opposite (or very near it). In this case we get a beginning that goes “I’m not homophobic, but…” and goes downhill from there.

OP is a woman living in Romania, where gay marriage is still illegal. Her brother has been with his partner for years, and recently they have taken to wearing rings to “pretend” they’re married.

I (26F) have an older brother (27M) who’s been dating another guy (30M) for around 4 years. I don’t have any issue with my brother being gay, but I have one with him wearing a wedding ring in order to pretend that he’s married to him.

You see, we live in a country where gay marriage still isn’t allowed (Romania), but despite this, my brother and his boyfriend started wearing weddings rings recently.

She asked her brother about it and he replied they consider themselves married in spirit and also that they hoped one day they could make it legal.

When I asked my brother about it, he told me that despite not being able to do it legally, they already consider themselves married spiritually and they’re hoping that one day gay marriages will be allowed to do legally as well, either by leaving the country or waiting till gay marriages are made legal here as well.

This did not appease OP, who took offense to their making a “mockery” of the institution by wearing rings when they are not and cannot actually be married.

While I think this nice, I told him that they shouldn’t be wearing wedding rings till they actually get officially married, as I think it’s kind of distasteful.

He told me that they’re just a symbol of their love and that they’re not hurting anyone by wearing them, but I disagreed, they’re actively misleading people into thinking that they’re actually married and frankly just making a mockery out of marriage.

Her brother snapped back and his husband (in spirit) told OP to mind her own business, but she’s not sure why she was wrong.

My brother told me that he doesn’t care what other people, including me, think about them wearing wedding rings and maybe they should just mind their own business, then left furiously.

Not gonna lie, I think his comment here was kind of out of line, as all I did was to give my opinion on people wearing wedding rings when they’re actually married yet and he seemed to take it personally.

His boyfriend also contacted me later and told me that their romantic lives doesn’t concern me and to stay out of it.

I have a feeling Reddit is about to tell her.

Most of the commenters have to agree with the fiancee – OP needs to mind her own business. 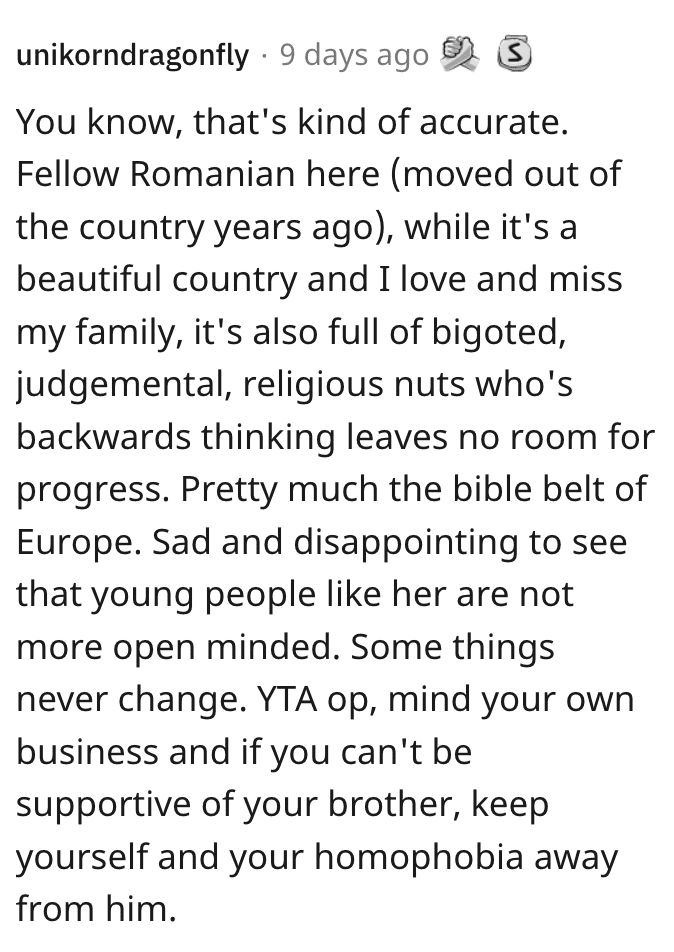 This one thinks OP owes them an apology. 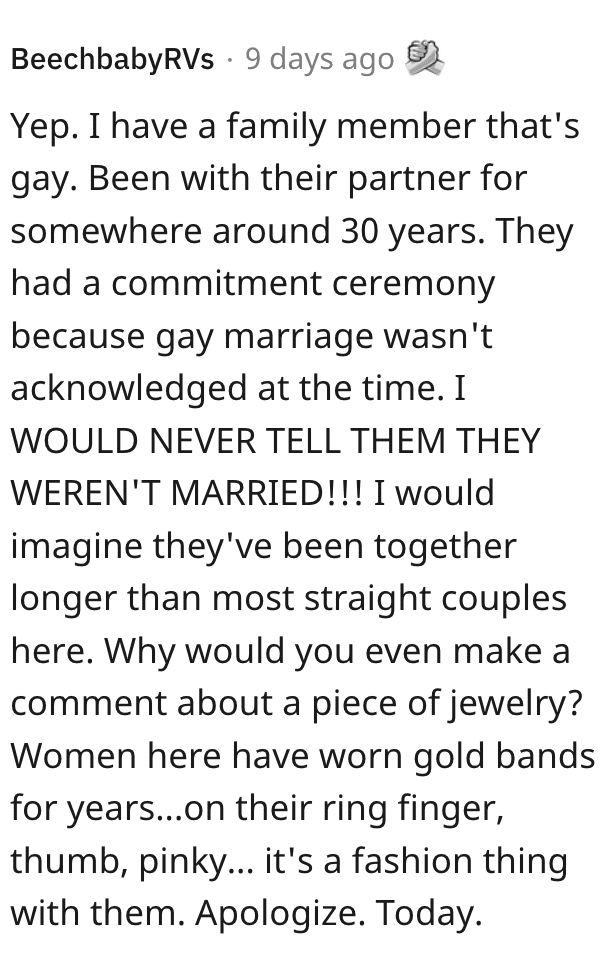 No one is making a “mockery” of marriage except married people. 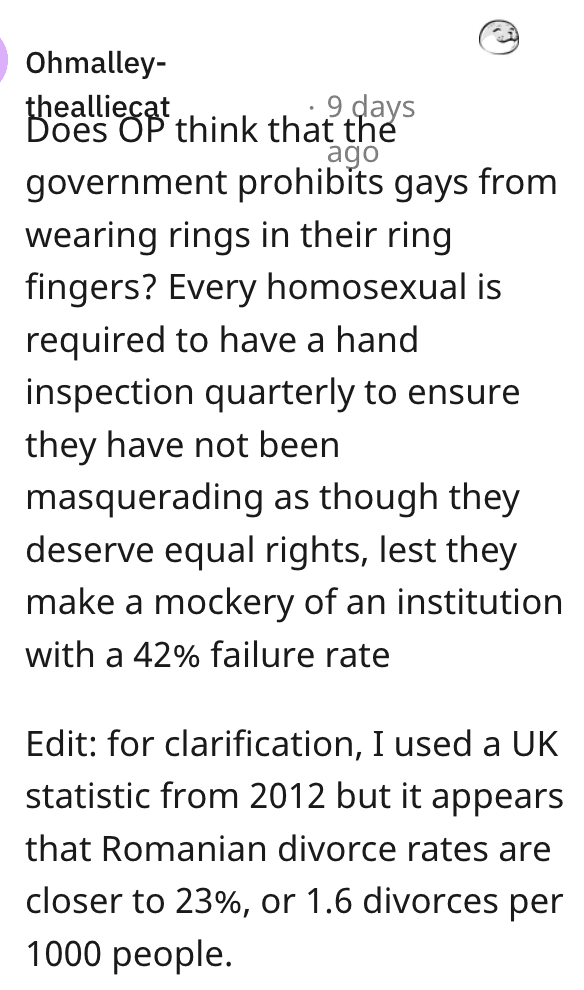 They might not even be calling them “wedding rings.” 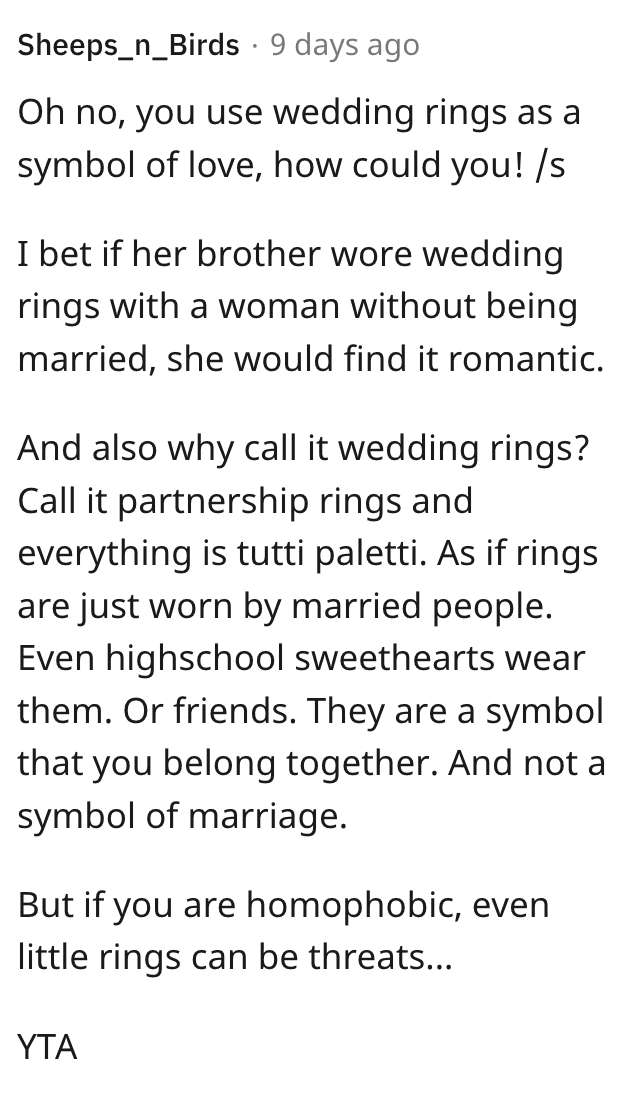 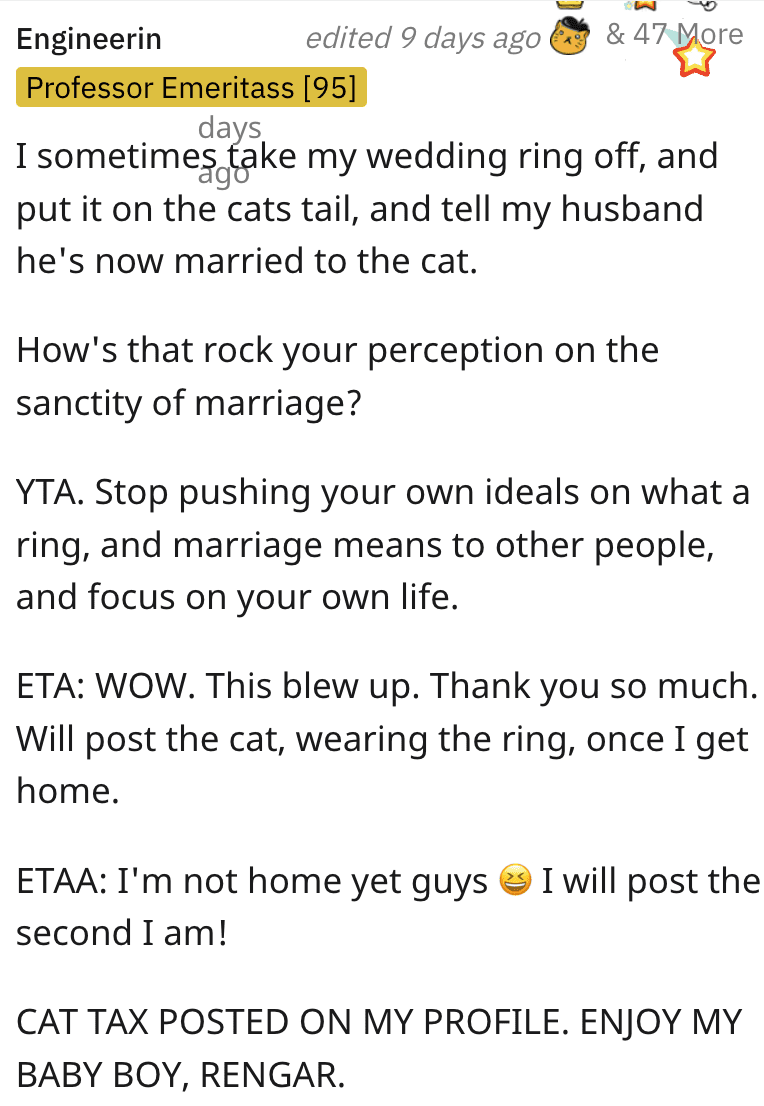 Y’all, I cannot with this post. Other people’s jewelry – and love lives – are just none of your dang business.

What choice words would you have had for OP? Lay them on us in the comments!