I’d imagine that if you’re recovering from an eating disorder, you question every little thing you have to eat…and that has to be pretty tough.

And this woman wants to know if she was out of line for having a snack because she has been there and done that.

“For background, I’m recovering from an eating disorder.

Part of my recovery means that if I’m hungry, I need to eat. I need to get used to responding to hunger by eating. If I don’t eat when I’m hungry it can become a habit, and I could relapse. I know that’s hard for a lot of people to understand, but it’s the best way I can explain it. I always carry snacks to accommodate this.

My boyfriend asked me to go to a family event with him at his aunt’s house. Dinner was at 6:30, but the gathering started at four and we were on time. Around 5:30 I started to feel hungry, so I ate a small granola bar from my purse to reinforce the eat when you’re hungry rule. Dinner was at 6:30 and excellent.

When we left my boyfriend was upset. He said I offended his family by eating a snack before dinner was served and implied they were bad hosts. He said I should have waited. I reminded him that I have to eat when I’m hungry.

He said dinner was in an hour and should have been sufficient to enforce the rule, but it doesn’t work that way. I have to eat as soon as I realize I’m hungry or it’s a slippery slope that could lead to me going days without food.

Boyfriend was angry and accused me of just wanting attention and being inconsiderate.

Should I have waited?

Was I being too rigid?”

This person said she’s NTA and that her boyfriend doesn’t have his priorities straight. 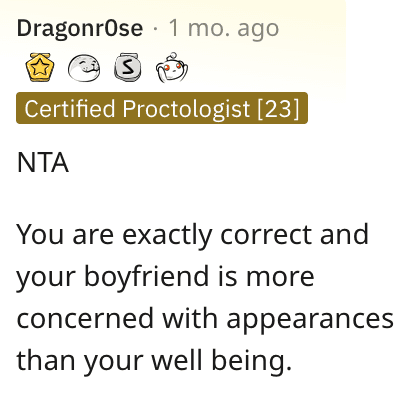 And this Reddit user agreed and said the BF is the real a**hole here. 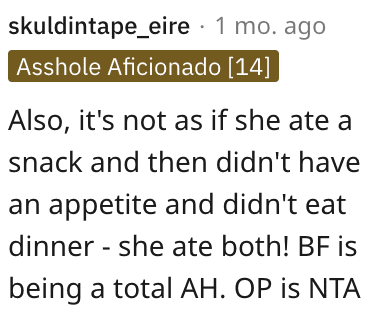 Another individual said that her boyfriend is clearly the a**hole here. 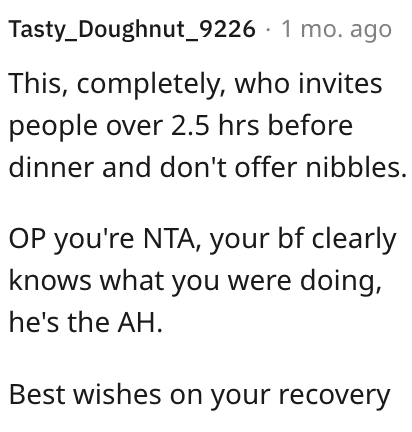 Talk to us in the comments and let us know!

Read Also:   The Voice Of Peppa Pig Is One of the Stars of "The Haunting Of Bly Manor," and People Are Losing It