And that also sometimes includes your siblings, unfortunately.

Take a look at this story from the “Am I the A**hole?” page on Reddit and let us know if you think this woman was wrong for uninviting her siblings to her wedding.

We were raised together and until 2019 we believed we were a nuclear biological family. Then we found out our dad wasn’t our bio dad, which even he didn’t know, it then turned out my older siblings shared a bio dad but I had a different one. We were also first cousins because their bio and my bio were brothers.

Dad left our mom, hurt, betrayed, and overall disgusted that she had lied to him for two decades. I was equally mad that she lied and hurt my dad. My siblings were less willing to cut her off but their relationship strained majorly.

Dad moved in with me and my then boyfriend, now fiance, and Covid hit. At this point all three of us agreed he was dad no matter what. And there was nothing that could change that.

I meant it; they didn’t.

They found their bio father and mine by extension, and have decided that he is now “real dad” and that our dad is just a stepdad. My brother has even corrected his two little girls who called dad grandpa, into saying he’s stepgrandpa and that’s what they call him, while bio gets called grandpa.

It broke my dad’s heart and he decided it was too much for him to accept. This is after talks between them where he was essentially told to know his place, stay in his lane and demoted with the clear message being nothing would change. I am so pi**ed at them. They have tried to push me to meet my “real dad” and have told me it’s okay to go back on what we said.

Initially, they were invited to my wedding but with this whole mess I told them they were no longer welcome and I did not want them to show up. They told me that just because they have a relationship with their “real dad” doesn’t change things between us. I told them it does.

That if dad isn’t our real dad after EVERYTHING he has done for us then we’re not “real siblings”, because technically we are HALF siblings and cousins. That my dad is till my dad 100% and biology is meaningless to me. And so it was best for them not to come, because I no longer want them there.

What I said hurt them. My SIL (married to my brother) told me I was an a**hole for throwing half in their faces and cutting them from my wedding like we haven’t been siblings our whole lives. I think that’s almost more annoying to me, because that’s our dad. But he can be s**t on and discarded like he’s nothing.

This reader said this woman is NTA. 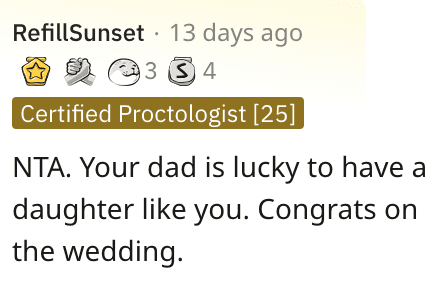 And another Reddit user agreed and said she needs to show her siblings how wrong they are. 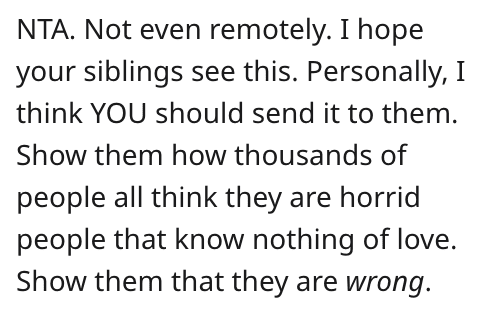 This individual also said she’s NTA and that she can invite and uninvite whoever she wants.