No doubt about it, custody fights over kids can get ugly.

And today we have a story on Reddit’s “Am I the A**hole?” page from a woman who wants to know if she was wrong for letting her mother-in-law know why she’s filing for full custody of her daughter.

Take a look at what happened and we hope we hear from you in the comments.

Janet isn’t a very family oriented person and h**es kids, which is ironic because me and mark have a daughter Cora.

Recently a situation came up were Janet tried to punish Cora, by locking her out the house at night

We all live around forests so anything could have happened to her. Cora called me and I ended up picking her up and calling Mark because Janet wasn’t answering the door.

I called Mark and told him what happened and he told me to at least listen to Janet’s side of the story.

I told him I didn’t care about her side because there’s no behavior that could allow an adult to lock a 12yr old out the house.

It’s honestly appalling to me, I ended finding out the full story and my mind still didn’t change about how I felt.

I talked to my daughter about how she would feel if I were to file for full custody and she said she didn’t care as long as she wasn’t around Janet.

I told Mark that I was filing for full and he told his mom and she started texting me on Facebook super angry. Apparently Mark and Janet told a different story than what actually happened and excluded the locking out the house part to make me and Cora look bad.

I ended up telling Mark’s mom and she apologized and from what I was told she told Mark that he was a horrible father and wouldn’t talk to him it he decided to continue the relationship between him and Janet.

Mark is now saying that I’m a bad person and a bad mom. My sister thinks that I went to far and the situation could have been talked about.”

Take a look at how folks responded on Reddit.

This person said she’s NTA and that this was totally inappropriate. 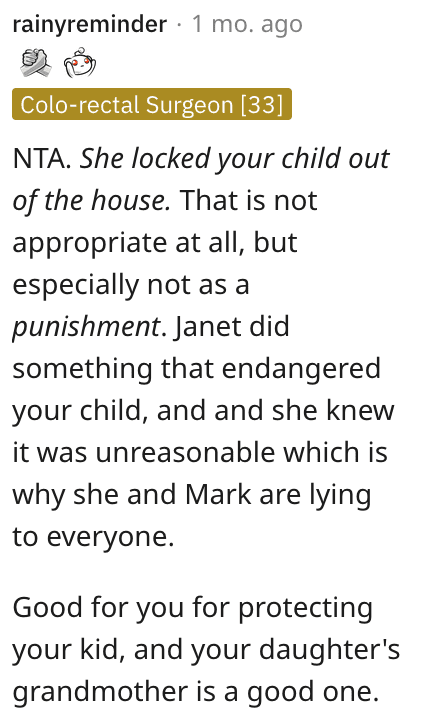 Another individual said she needs to do something else, as well… 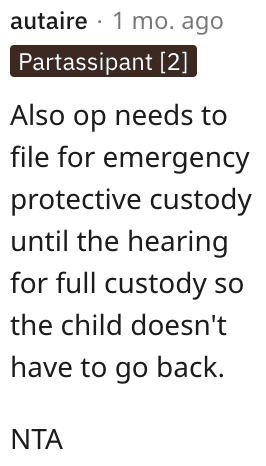 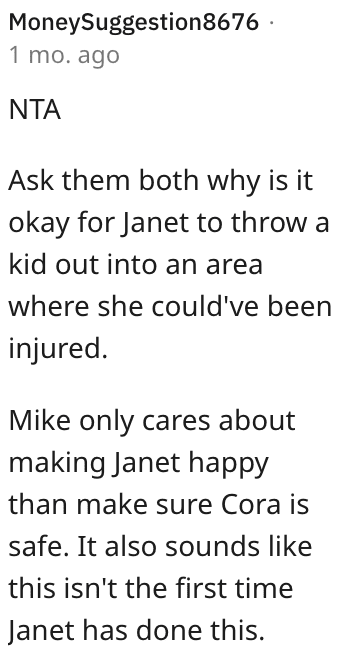