I know some people out there have issues with Hooters as a business and that’s fine, but the people who work there are just trying to make a buck and pay their bills, ya know?

And that brings us to today’s story from Reddit’s “Am I the A**hole?” page.

“Idk why this is an argument but I just want an unbiased opinion.

I (21 F) recently got a job at hooters and my roommate Ivy has started making extremely passive-aggressive comments about it. I just started the job two months ago and ever since I started my roommate will not let up.

We are both college students and both work in order to pay rent so I decided that I would try a hand at Hooters because I have heard about how much money you can make, and so far it’s all been true. I know some people have had really bad experiences but I adore all of my coworkers and have a very healthy work environment.

Onto the issue, Ivy will make the rudest comments when I am about to leave or come home. She’ll make “s**t jokes”, say I am making women’s lives harder by enforcing standards and make comments around the idea that I am losing “worth”. Every time I bite back she always gets defensive and says that I don’t know how to take a joke.

This all blew up over the weekend. We invited all of our friends and boyfriends over to our apartment. They all got there at 8 and my shift ended at 10 so I was going to be late no matter what. When I walked in the door Ivy pointed at me and said “This is what I was talking about! The uniform is so demeaning!” and I don’t know if it was the stress of everything but I just snapped.

I told her to shut the f**k up and that if she was going to make her s**tty comments at least do it in private. She got really sulky and said I was proving her point that I can’t take a joke. Most of our friends took my side but I want an unbiased opinion.

One person said she’s NTA and that women need to be supporting other women. 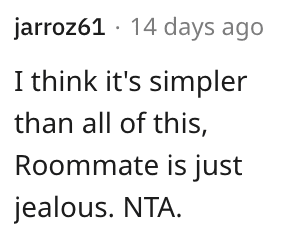 And this individual talked about their own positive experiences working at Hooters. 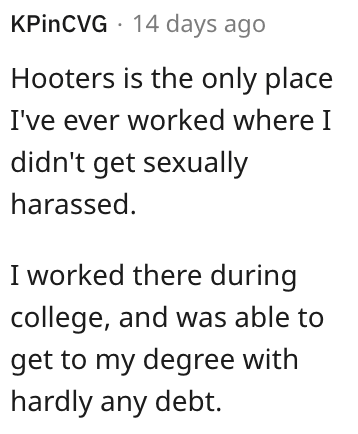