Is this woman woman for ruining her sister’s wedding?

Let check out this story from Reddit’s “Am I the A**hole?” page to see what happened.

“I (24f) was with my ex fiancé N (27) since I was 13 and he was 15. He was my first love, my first everything. We got engaged when I was 20 and about 6 months after we found out we were expecting. Unfortunately I miscarried a couple days later. That was the worst moment of our lives.

We always dreamed about starting a family early so this was a major blow to us individually and to our relationship. I fell into deep depression and I admit I was wrong for only caring for the lost i felt and not my partner’s. We argued a lot, he partially blamed me and I accused him of not knowing how it felt to lose a life you were growing inside you.

We were hurting each other and decided to separate for a while, that while turned into a year. We still kept in contact, I went to therapy and worked on healing myself, he even came to a few sessions with me.

We decided to get back together shortly after my 23rd birthday. However the relationship wasn’t the same. He was somewhat withdrawn from me and I thought it was because he still blamed me. I was sick overthinking and worrying. It got to the point where i was going backwards in my process so i decided to snoop through his phone.

I found out during the year we separated he had been confiding in my sister (27) and it turned to something intimate. He cut it off when we got back together but the damage was done. She was pregnant.

Turns out my parents knew about this and some of our friends. I kicked him out and cut off everybody who knew. Well a couple weeks ago I got an invite to the wedding. Something snapped inside of me, I got d**nk and I took a cab to my parents house where they were throwing a party for them.

Most of my family was there, I basically showed up and gave a whole f**k you speech to everybody. My sister ran upstairs in tears and my parents called me an a hole for ruining the prospect of their wedding.

I said good because nobody apologized to me, everybody just kept saying we were separated, things happen people fall in love, i should be happy for them, the heart wants what i wants. The worst part is my sister told me maybe my baby died for a reason so she could get her happy ending.

I’m regretting getting d**nk now because i’m not a confrontation person but i was so upset. AITA?

This reader said if this happened to them, they would lose their s**t and that this woman is NTA. 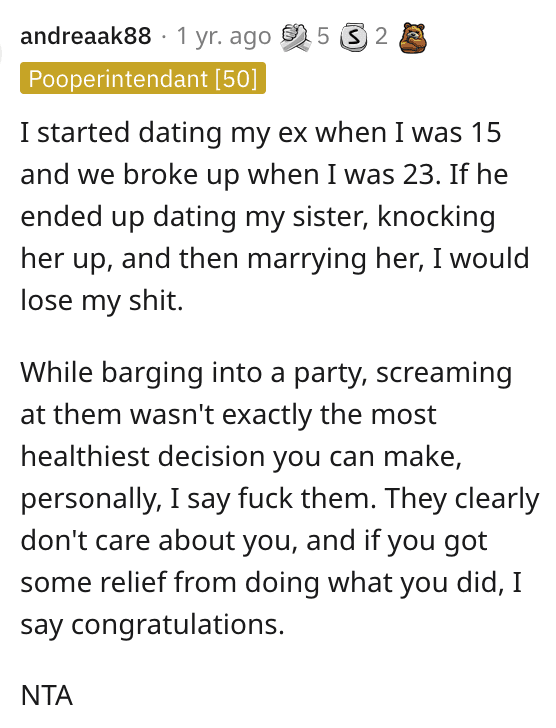 Another Reddit user said she needs to leave these toxic people in the dust.

And this individual said this story boils down to 80% NTA and 20% Everyone Sucks Here. 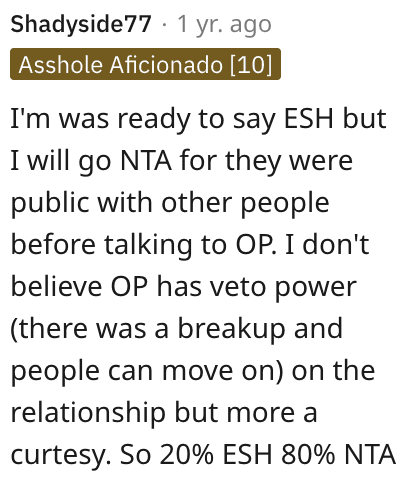