Have you ever been to a childfree wedding?

One where kids were not allowed under ANY exceptions?

I have not, but I know a lot of folks out there have them for various reasons.

And this woman refuses to let her brother bring his son to her nuptials…but is she acting like an a**hole?

Let’s see what went down.

Wedding planning went okay but as soon as we started sending out invitations the problems began coming our way. Thing is Derek and I decided the wedding would be childfree, it wasn’t out the blue and this possibility was there.

I have a 42-yrs-old brother Paul who’s married but he and his wife suffered from several miscarriages and failed pregnancies during their marriage. They finally were blessed with a son that everyone calls a miracle and a rainbow baby.

My nephew is 4-yrs-old and everyone salutes him and treat him as a king and also turn blind eye to any misbehaviors he has which caused him to become loud, destructive, out of control and punish-less.

When Paul received the invitation and found out out kids weren’t included he and mom lost it and decided on an urgent meeting with me and Derek. Paul said “my son is an exception, right?” I said no and this rule is to be followed by everyone.

He argued that I was making a mistake by excluding my nephew. He and mom went on about how he’s a miracle since he’s their rainbow baby/grandbaby then Paul said he had no problem with my wedding being child free but expects me to make an exception for his son. He explicitly said ” you can have your “child free wedding” but you’re gonna have to make an exception for my son and you know why”.

Derek apologized and said we won’t since our friends and my inlaws had kids too but now have to leave them home and arrange for babysitters and advised him to do the same.

Paul was offended and said if his son isn’t invited then he won’t come and gave us an ultimatum to drop out if we don’t edit his invitation. That caused my family to freak out because Paul is the only and oldest sibling I have and they said his presence at the wedding is a must.

I had an argument with mom and dad who said the fact I’m choosing this to be my hill to die on and treating Paul and my nephew like that was appalling. They emphasized how my nephew is especial and I should be ashamed to exclude him even when the wedding is child free.

My parents said if Paul won’t come they won’t come either which devastated me a lot and caused me to break down. Derek said they were the ones being unreasonable and disrespectful of our wedding and we should wait maybe they’ll come around eventually but they’ve doubled down.

This morning my aunt and uncle dropped out as well as my other uncle last week. Paul told everyone and they’re supporting him and won’t come unless I make an exception for my nephew but that will upset my guests and they’ll call me hypocrite. My family is divided saying I’m ruining my own wedding basically saying this is all on me.

ETA because I see this question asked a lot.

My family have normalized this behavior from Paul and also his wife. Whenever I point out how unacceptable it is to expect everyone to cater to my nephew and his parents, Paul would chime in with “she’s jealous” because he and his wife have a kid while I can’t/don’t (I was married before meeting Derek and divorced my ex husband for my inability to have kids but that’s another story).”

One reader said this woman is NTA and that she’s not being malicious. 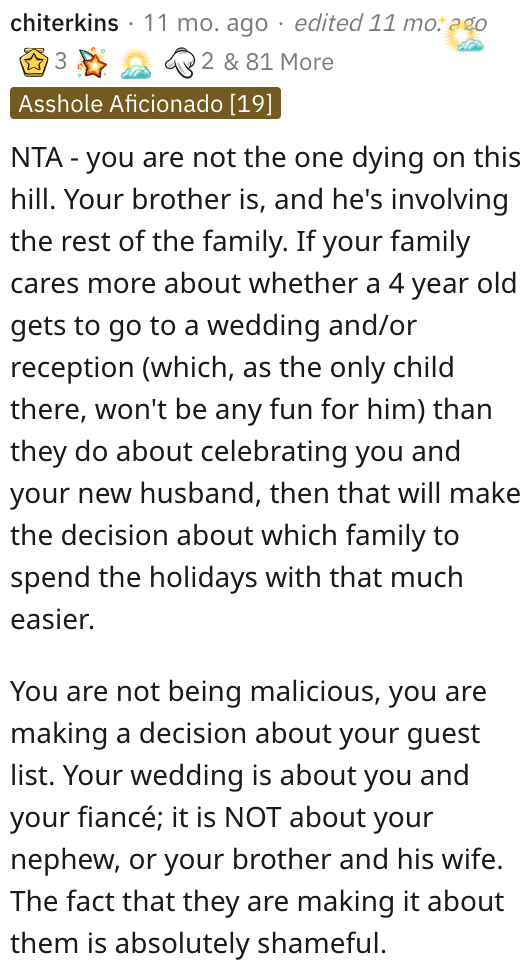 Another individual said she should just disinvite them if they’re going to be this way and they can enjoy their wedding the way they want to.

And this Reddit user said this couple is raising a very entitled kid. 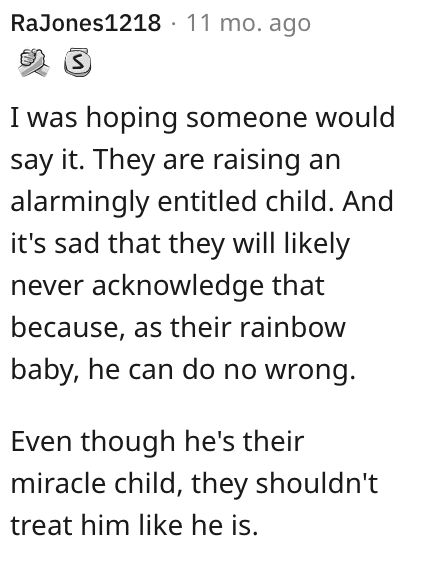