What kind of a person won’t allow someone to throw an engagement party…?

Well, you never know what kind of stories you’re gonna run into on Reddit’s “Am I the A**hole?” page and here’s another example.

“My husband’s daughter, we’ll call her Clara, recently got engaged and he wanted to throw them a party.

This is important to him as he feels he feels our daughter together got better birthday parties and this is a point of contention with him. I wasn’t even around when she was having these lackluster parties, so I don’t know how it is my fault, but somehow it is.

At first I agreed, but when I thought about it the groom’s mother is banned from our house. She called me a whore to mutual friends, and she got d**nk at our house and announced we are bad people for getting married and having a baby, because she never would have done that to her son, and she bragged about how she never introduced a single boyfriend to her son because he wasn’t ok with it.

That is her choice, but personally I don’t think it is healthy to let a child run your life to that extent. She also breastfed her daughter at a dinner party which was fine, but caused her to spill food all over my couch. When I was annoyed she told people I’m anti-breast feeding, and made a joke about how Clara will never want to bring her future children to our house.

Needless to say she is banned. My husband already told Clara about the party. He then had to backtrack and explain that while he still wants to throw her a party, the groom’s mother cannot come. Clara got irritated and said she didn’t want the party then and that he was making her event about me. She said I should have thicker skin and not care what this woman says, and cited that her fiance offered to pay for our couch.

My husband asked me to reconsider and I said no. There really isn’t time to book a venue, so we are just going to cancel. He is now mad at me and thinks i should let it go this one time. I am just not ok with being disrespected, or having someone say my daughter should not exist right in front of my daughter.”

Check out how Reddit users reacted to this story.

This person said she’s the a**hole and that this is a big moment for her husband’s daughter. 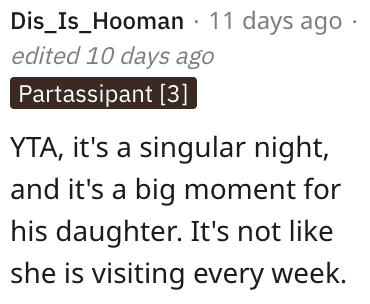 Another Reddit user said she’s NTA and that she needs to stick up for herself.

And this individual also said she’s NTA and that she doesn’t need to allow toxic people to invade her space.