I’m already laughing just from the title of this article by itself!

But let’s not get ahead of ourselves, okay?

“Ex cheated on me with his current wife. That was 5 years ago.

Ex and I share three sons who are 11, 10 and 8. Ex’s wife has a daughter and a son with her ex, who she also cheated on with my ex. The two of them have said it all. From it was meant to be, to how great it is because the kids all have a bigger and happier family, blah blah blah.

I am over it in some ways. There is very much a sting that the affair partner in my marriage gets to call herself my kids stepmom. But I’m not at all sorry that my ex is gone. The man slept with her behind my back for 18 months before her husband and I found out. I am civil when the kids are around, I ignore them when the kids aren’t around.

This whole thing happened over ex’s parents. They were disgusted with him for cheating. MIL told him that he destroyed his kids foundation. That leaving a spouse is never easy and divorce is hard for kids anyway but when you add conflict in the way of cheating, you take something from a child that they can rarely ever get back, and that’s parents who can still care about each other and want the best for each other despite not being together.

They stayed very close with me and haven’t welcomed ex’s wife at all. Nor have they been involved with ex’s life since really, or his stepkids. It bothers her a lot.

My youngest son won an award in school a couple of weeks ago. Ex and his wife were there. So was I. Ex’s wife ended up coming up to complain to me because both mine and ex’s parents showed up briefly, spoke to my son, then to me and left. She was saying how unfair it is.

How her kids don’t understand why ex’s family have nothing to do with them and why they never see them but they know my kids have a relationship. She said ex’s family love me, it hurts her feelings to feel not good enough. I’ll be honest. I rolled my eyes first but then I laughed because she seemed to expect sympathy or help from me.

Laughing at her pi**ed her off. I have heard from her and my ex since that I was rude, I should care about the kids at least, and I am not thinking of my kids when I keep bad blood between us and laugh at her suffering.

One part of me doesn’t care and believes I’m fine once my kids couldn’t see it. Another part of me wonders if I was an a**hole to laugh at her.

Take a look at what Reddit users had to say about this.

One person said this woman is NTA and that this other woman has a lot of nerve. 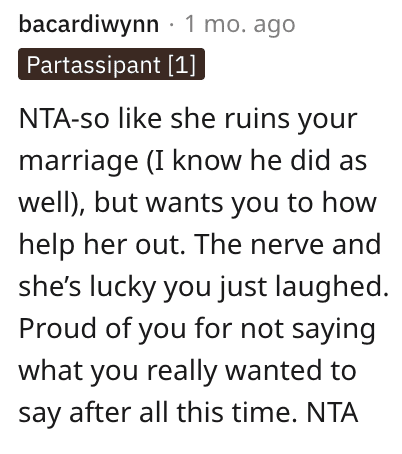 And this individual agreed she’s NTA and added that she has an amazing ability to bite her tongue. 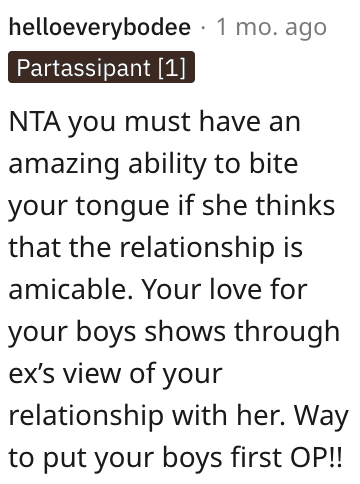 Another Reddit user said they would have laughed at this other woman if she came to her about this. 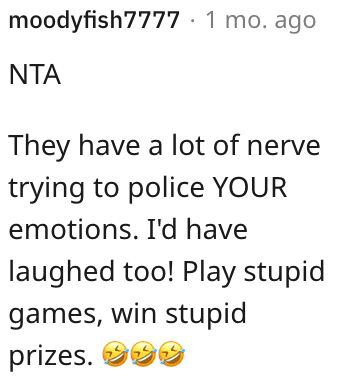