If you’re any kind of performer, you deserve to get paid what you think you’re worth.

But, as you can imagine, sometimes people want performers to work for free or at a discounted rate…and that doesn’t always go over very well…

Take a look at this story from the “Am I the A**hole?” page on Reddit and let us know if you think this woman asked for too much money for her performance.

“I (24F) am a professional Mermaid, it’s an unusual job I know but I love it. I work at an Aquarium putting on shows with the other Mer and also do private events to make some extra money.

My friends niece has a birthday coming up, she’s turning 7 and my friend thought i’d be the ideal entertainment for the party as kids love Mermaids also her niece hasn’t met me so it won’t break the immersion of her recognising me.

She recommended me to her brother and sister in law and I met up with the three of them to go over what they wanted for the performance, how long it would last and my rates. I told them I would be willing to perform for two hours for £100 which shocked them as that would be £50 an hour, my friend asked me if I could cut a deal and I explained I already was they were matching the salary of the Aquarium with this and explained I actually charge £150 an hour for private events.

They tried to negotiate me down offering to pay £50 for the two hours stating i’d have as much food and drink as I wanted at the party, now after a performance i’m usually ravenous as I don’t eat much before it for obvious reasons but food on top of £50 isn’t enough in my opinion, not when I have to travel to get there and could have used this time to do an event at my normal rates.

I told them that wouldn’t work for me and they have told me they’d need to think about it clearly not keen on the idea. My friend is unhappy with me and asked if I could just take the £50 for her sake as her niece would love it and said that as we’re friends this should come before money.

I honestly feel bad about this, I thought it was a good deal and I h**e upsetting my friend but £50 for a two hour performance is ridiculous. Should I just take it and mark this down as a loss for the sake of my friendship?”

This reader said this person is NTA…and then they made a funny pun. 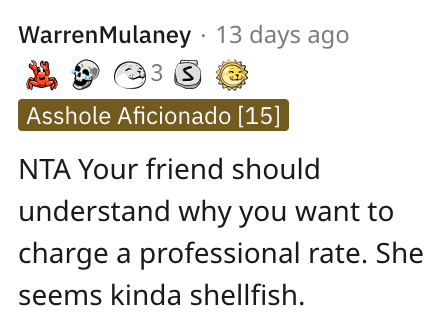 And this Redditor shared their own story about something similar. 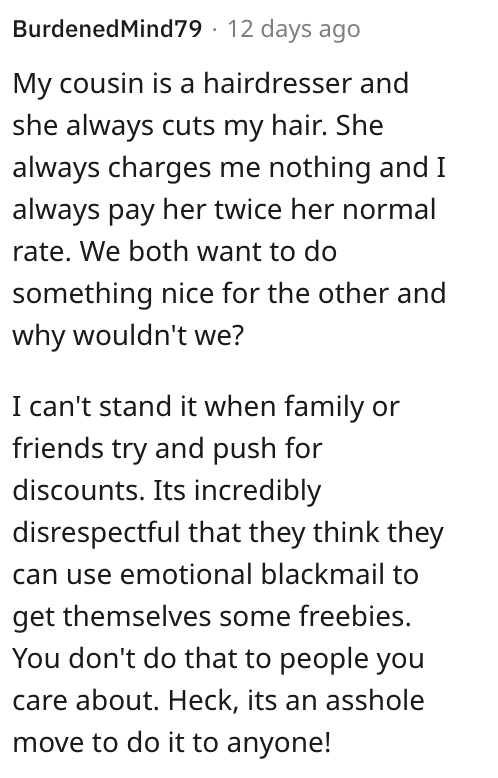 Another individual made a good suggestion about what this person should do in the future. 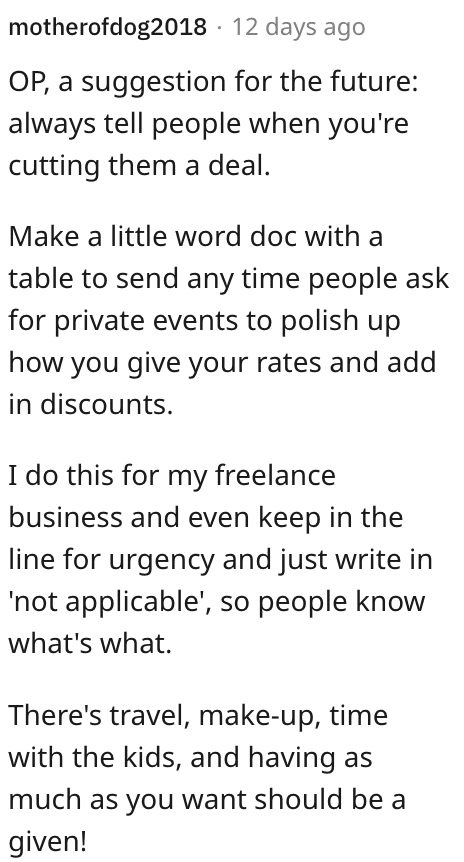 Talk to us in the comments and sound off.