Yikes…by the title of this article, you can tell that something went really wrong…

And it seems pretty serious…

Let’s take a look at this story from Reddit’s “Am I the A**hole?” page and see if this woman was out of line for what she did.

“I 20F moved to a new state two years ago. I have several chronic health problems and I needed new doctors. I looked online and found a few practices that sounded good (I even asked on FB for suggestions from people who have the same illnesses I do).

Anyway, I made an appointment with a practice and saw the Nurse Practitioner. The appointment went “normal” at first. I saw the nurse and gave her the run down of my diagnoses and medications I’m on, as well as doctors I would need referrals to see. The nurse wrote it all down and even asked me detailed questions about my illnesses so I thought it was going good.

Then I saw the NP. She read my chart and also asked some questions which I answered. Then she asks me what specialities I wanted referrals to. This is where it went wrong… I told her I needed to see a neurologist, gynecologist, and a gastroenterologist. I had seen many doctors in those specialities before and even brought my former charts to give her.

She then asked why I wanted one for a gynecologist. I said “because I’m having XYZ issues and my former gyno before I moved wanted some further testing based on my symptoms” “Oh you don’t need to see one. Every woman has heavy periods and cramping” I told her that I had been in the ER every month on my period for 6 months straight with how bad my cramping had been. She still refused. Regardless of whether you think there is a problem that requires a gynecologist or not, it’s my right as a woman to see one.

Last but not least. She asked why I wanted to see a gastroenterologist. I had been having a really hard time keeping food down and was in a lot of pain every time I ate. She looked at me and said “oh you’re too fat to have any problems there”

I left crying that day. I went home and told my mom what happened and she suggested I report her to the medical board, so I did. I didn’t have any evidence “technically” so they couldn’t really do anything. So I did what most people would do and made reviews online and posted about my experience in the local groups online.

I got a phone call from their office manger asking me to take them down because people were leaving their practice. I wasn’t the only one to come forward about how they treat patients.

The office manager told me I should have just called them or came in to talk about it. I did not feel comfortable doing that.

AITA for not going in and talking about it to them instead of blasting them on social Media?”

This reader said she’s NTA and that you’re allowed to do things like this. 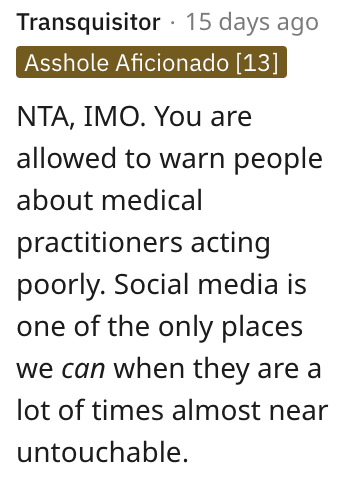 And another Reddit user agreed and said she did a good service by posting the review. 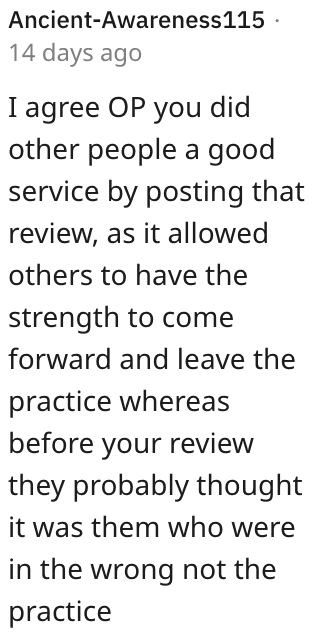 And this individual said yeah…that’s pretty much the point of reviews like this! 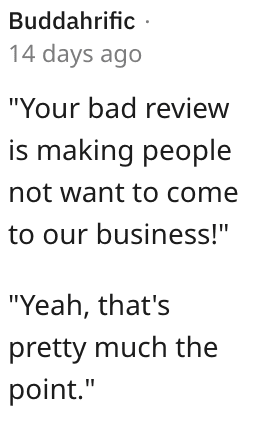