If a woman beats you in a sport or in a game, just accept that they’re better than you and move on with your life.

Check out this story and let us know if you think this woman was out of line for emasculating a guy in a game of squash.

“My husband and I have been playing squash for the last few months once or twice every week. Recently, my friend “Rebecca” and her boyfriend “Joe” joined us too and yesterday was their 2nd time playing.

I played 2 games against Joe and won both of them, because I have been playing for much longer than he has. I saw that he was starting to get a bit angry after the first game so I told him he is doing really good considering it’s only his 2nd time, but didn’t let him win the second game either.

When he played with Rebecca after that, he acted really rude and belittling towards her because she wasn’t as good.

When we got home, I asked them if they wanted to join us on our evening dog walk and they said yes, but Joe seemed to be in a really bad mood. We walked for about 1.5 hours, which is a usual evening walk for us. During the walk, Joe was rude towards Rebecca, getting mad at her because she didn’t know where we were, etc.

Next day, Rebecca was all mad at me, saying that she had to deal with Joe’s bad mood because I not just won against him twice, but then I also “challenged” him on a walk. She said that I shouldn’t have emasculated him, because he took it out on her. I told her that Joe is an a**hole and she should break up with him if he treats her badly

Rebecca says that I had to know that Joe will react like this and I was deliberately trying to emasculate him because I don’t like him. AITA?”

This person said she’s NTA and that this guy doesn’t sound like much of a man. 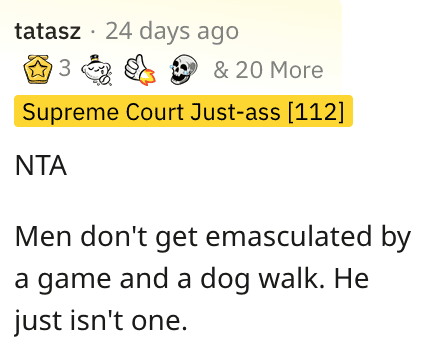 Another reader shared some wise words that they were raised on… 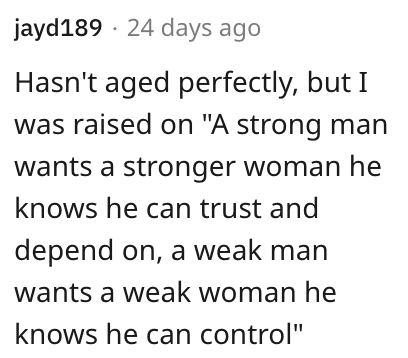 And this Reddit user agreed that this woman is NTA and they had a thought about masculinity. 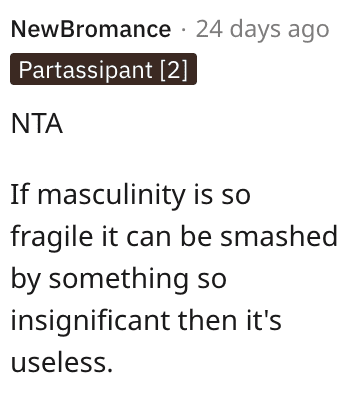