I can say that if someone keyed my car and I found out who it was, I wouldn’t hesitate to call the cops…or make them pay for the repairs with a little extra cash thrown in without getting the authorities involved.

Doing that is pretty over the line, in my opinion…

But enough about me: check out this story from Reddit’s “Am I the A**hole?” page and make up your own mind about what this person did.

“I am a single woman in my early 30s, making my living writing and self-publishing adult fiction. By adult fiction, I mean, ADULT fiction with majority of the ‘plot’ being steamy.

I don’t typically tell people what I write but I do tell them I write books for a living under a pen name (and if you’re questioning my writing abilities, I have an editor to correct my mistakes). I am not hiding it per se but I am not telling everyone I meet what I do for a living and none of my neighbours knew, only a bunch of friends.

I live in a house alone, pretty much of all my neighbours are either young families or retired couples. My next door neighbour is a young couple. We’ve been polite to each other but haven’t been close or anything.

Lately, the husband, let’s call him Roger, became very friendly towards me which I tried to ignore but he’s been getting too flirty for my liking, and I started avoiding him.

They had a BBQ over the bank holiday weekend, and I was taking rubbish out to put in my bin, Roger looked at me, waved ‘hi’ and whispered something to his friend and they both watched me very carefully which was incredibly creepy.

On my way through my garden, I saw Roger’s wife (Dalia) leaving the house with her friend and they both looked at me with disgust and whispered something to each other. It was weird and I hurried back inside.

Since I am working from home, I decided to see who’s leaving those leaflets and to my surprise, it was Dalia. I decided to confront her and ask to stop putting religious leaflets through my door. Despite me being polite, she was not happy.

She told me that I should rethink my life because what I write is disgusting (it’s pretty vanilla) and she found her husband reading it at night and you can imagine doing what. She kept going on and on how I am going to burn in hell, how I have no morals, etc. Well, I told her to stay away from me and discuss this with her husband and I closed the door in her face.

Don’t know who, but someone told them what I do for a living. A day later, I found the word ‘slt’ painted on my door. A few days later, I caught her keying my car, she was almost done with the word ‘whre.’ Well, I called the police on her and since I installed cameras after the ‘sl*t’ incident, she is being taken to court over keying my car.

I talked to my other neighbour (she asked about the police) about it and she told me that I went overboard, that Dalia was clearly insecure but she’s a lovely woman and great mother and I should have talked to her instead of calling the police and give her a chance to change her behaviour.

AITA for calling the police and not giving Dalia a chance?”

One person said this woman is NTA and that this was a crime, plain and simple. 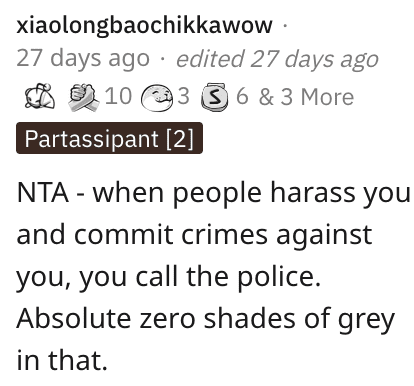 This individual had some advice about what she should say to the neighbor. 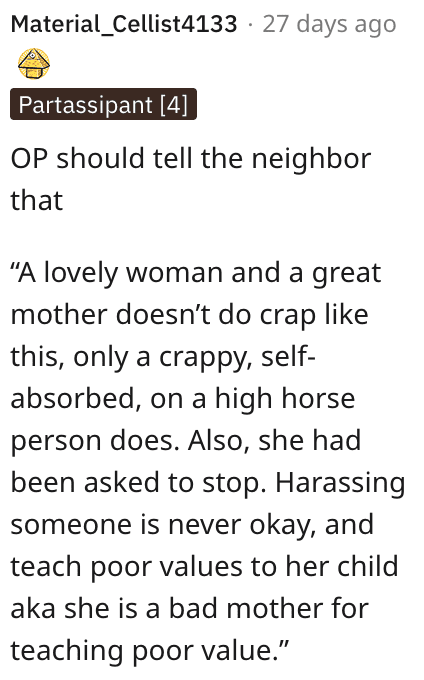 And this Reddit user agreed she’s NTA and the neighbors are teaching their kids bad life lessons. 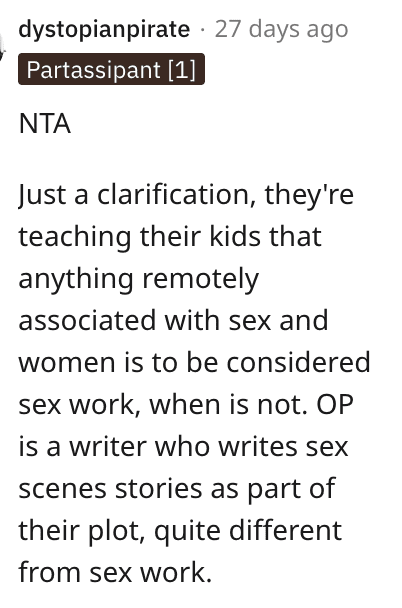