What would it take for you to walk out on a birthday party thrown FOR YOU?

It would have to be pretty bad, right?

Well, to each their own, but this young woman took to Reddit’s “Am I the A**hole?” page to see if she was out of line for leaving a party because she didn’t like the present she received.

“I (20F) recently turned twenty and had a party to celebrate turning 20. It was a small gathering at my favourite sushi restaurant with only my immediate family and a few friends.

Everything was going well until it came time for the presents. You see, in my family there’s this tradition that when the first born turns twenty, they are given this pocket watch that was owned by my great grandfather. When our country was still colonized by the British, he (my great grandfather) was taken in by some missionaries and became a teacher.

As a teacher he was super instrumental to the community and partly funded the first black owned school there. He became headmaster and as thanks, the community chipped in to get him a pocket watch. When my grandfather turned 20 he was given the watch and it became a tradition. As per tradition, l was expecting to get the watch. I had even made an effort of hinting how l wanted a watch for the whole year prior.

Among the presents l saw this small box and got excited thinking it was the watch. The watch came in this wooden casing with a velvet lining inside and it was about the same size as the box l saw. I made a deliberate choice to open that box last to make sure the night ended on a highlight.

When it came time to opening the box, it was a watch but a digital one. It was a good watch to be honest but it wasn’t THE watch. My dad was excited as he went on prattling about the features of the watch, it could count steps, connect to my phone via Bluetooth, control music, measure my heart rate etc. While he talking l burst into tears and left the table running.

My dad follows and asks why l was sad and I said l wanted the watch, the one that belonged to my great grandfather. He said he wanted to give it to my younger brother who is 12 since he is boy. If he gives it to me, it will leave the family since I’ll get married to a man and join his family. This came as a blow since I’ve always been closer to my dad than my brother was and my brother isn’t even interested in the watch like l have been my whole life.

We got into an argument and it ended with him saying my immaturity over such a small matter is why he wouldn’t have given the watch to me even if l was a boy. I left after he said that. That was two weeks ago, and we haven’t spoken since.

Now let’s see what Reddit users had to say.

This reader said this woman is NTA and that they don’t blame her for being upset. 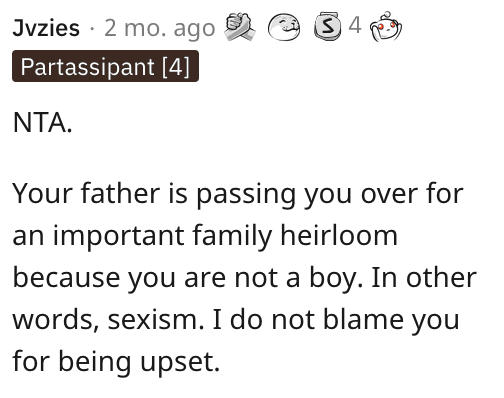 Another Reddit user agreed and could relate to this woman’s story. 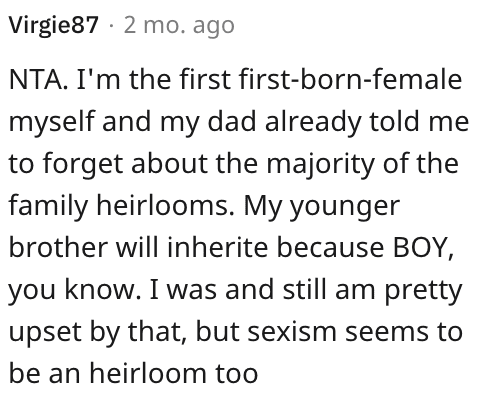 And this individual said she shouldn’t speak to her father for a while after this incident. 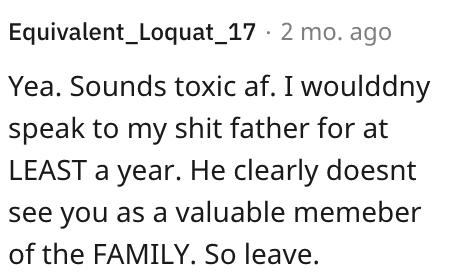