Oops! Sorry about that!

After reading this story from Reddit’s “Am I the A**hole?” page, I will forever question people “accidentally” walking in on folks who are naked…I guess you learn something new every day!

Check it out for yourself.

They both came to me and asked if it was okay for Mark to live in our spare bedroom so that he could save on tuition by not paying room-and-board. I agreed because Mark said he would help pay the bills so it would be a win-win situation. I always liked Mark and didn’t think it would be an issue so I agreed.

It’s been about a month since Mark moved in (he still hasn’t helped pay anything, nor even got a job yet but that’s a story for another time.) I have found that Mark does not know boundaries. He often oversteps in telling me how to do things in my own house and how to care for my dog but the biggest issue is he never knocks before entering mine and Nate’s bedroom.

When Mark moved in, I stopped being able to sleep sleep naked or chill in our room after I get out of the shower because he just walks in (there’s a bathroom off our bedroom.) I told Nate that he needed to have a talk with him about knocking since we never just walk in his room. Nate agreed and talked to Mark about it a few days ago. He beat around the bush a little but Mark apologized and said we wouldn’t do it again.

When I get home from work I immediately shower and then walk around in my robe for the remainder of the night. Last night Mark said he was going to his room for the night so Nate and I were in bed. I was sitting on top of him with my robe untied and nothing on but panties (I’m sure you know where this was going but at the time Nate was still clothed) when I heard Marks bedroom door open.

I stopped what I was doing and wrapped my robe back around me just in time for Mark to come barging in our room. When he saw me sitting on Nate he kind of laughed and goes “my bad. I just wanted to show him a video.” I was annoyed but kind of fake laughed and told him he really needs to start knocking. Nate was irritated but didn’t say anything. Mark left the room but k**led the mood so we just ended up watching a movie and going to bed.

After that I thought Mark would really start knocking. This morning I was lying in bed on my phone without clothes on (like I said, that’s just how I sleep) and Nate was still sleeping. I was half uncovered when I hear footsteps so I quickly cover myself back up just as Mark comes barging in AGAIN. When he walks in he says he was hoping Nate was awake so he could show him something. I was annoyed and told him Nate will be out when he wakes up.

I’m kind of at a crossroads because he is Nate’s best friend and I don’t want to be rude and blow up on Mark but Nate has already talked to him about knocking and I don’t find it fair that I can’t relax in my own room. I know that if Nate sees Mark walk in and I’m actually naked, Nate will absolutely flip.

WIBTA if I purposely let Mark walk in on me naked to get him to start knocking?”

One reader said that this woman’s fiancee needs to step in here.

And this Reddit user said that she needs to be careful and to be wary of this Mark character. 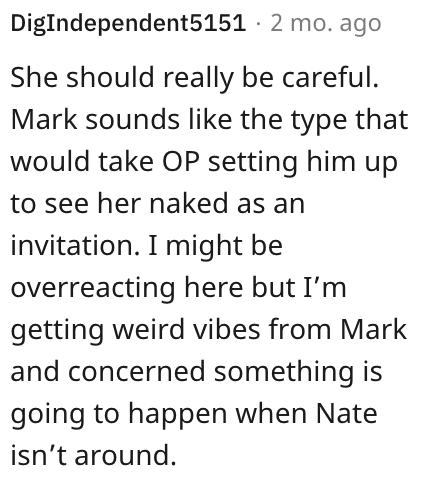 And another individual said that this definitely sounds intentional and that this woman needs to be careful. 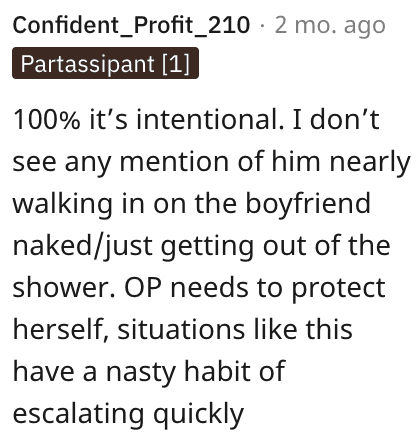