Is there anything more satisfying in life than really putting a manager who is a total a**hole in their place?

But I guess all of us can question if we did the right thing after doing something like that, right?

Which is what this woman wants to know in this story from Reddit’s “Am I the A**hole?” page.

“So, I have been a SAHM for several years. I worked very hard on our budget, shopping, meal prep ext and we were ok.

We recently became empty nesters. The last one moved out, pays her own bills, got a scholarship ext.

I was bored so I decided to take one of the many grocery store jobs available at the store across the street.

My intent was part time but they quickly moved me to a different, full time position, which I do like and am good at and it pays quote a bit more.

The store is short staffed and I have been doing my best to help but recently my manager sat me down with her boss(witness) to have a “documented discussion” about how I am not a team player, because I won’t help other departments even though I am struggling to get my own stuff done because my position should have 3 people but it’s just me.

They wanted me to sign a paper acknowledging that my behavior was unacceptable.

I told my manager “you need me, I don’t need you. In my previous position in management I learned it will cost your store an average of 10k to hire and train a replacement. I also know you have a ‘walk in interviews welcome’ sign outside every day and you all are stressing about how short staffed you are and have limited applications.

So no, I won’t sign this, feel free to fire me. There are 10 stores within a mile that are also offering walk in interviews. So, no, I won’t sign this. You can accept that or replace me and I really don’t care of you mark me as not eligible for rehire, I’ll just leave you off my resume and do just fine.”

Still have a job 3 days later and everyone is acting like nothing happened, but some people are saying I am being the AH because the management is also struggling because they are short staffed.”

One reader said she’s NTA and that she called her bluff. 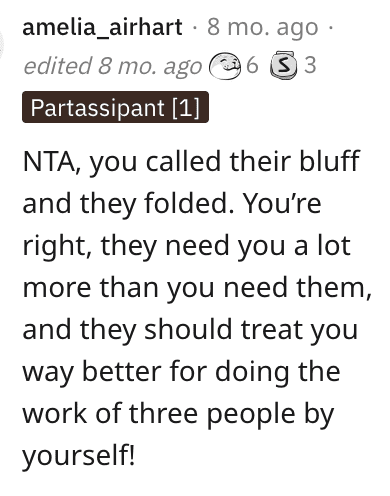 And this individual said they love seeing someone stand up like this at work. 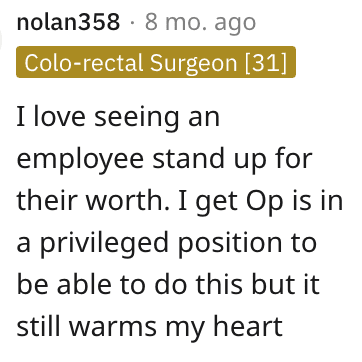 Another Reddit user added that she’s using her privilege for good in the workplace.