In the world of weird posts in the subreddit Am I The A$$hole, this one just might take the cake – because honestly, who cares about a person drinking milk if that’s what they want?

OP is newly sober and was feeling a bit nervous about attending his sister’s wedding with an open bar.

Since his youngest sister realized this, she was sweet and packed him a cooler of non-alcoholic drinks she found at her house – and one of those things was a half-gallon of milk.

I quit drinking 4 months ago and my oldest sister Emmy’s wedding was last weekend.

My younger sister Sara has been really supportive of me getting sober and she actually packed me a little cooler bag of non alcoholic drinks for the wedding when she knew there would be an open bar and wanted me to have other options.

She’s 15 and doesn’t have a car or anything yet so she just packed this bag with drinks from around the house. But it was still sweet

Anyway, at the wedding, I look in the bag and there’s a few iced coffees, a few juices, and a half gallon of milk..

Now, she knows me a little too well. I’d drink milk with pretty much every meal, I know it’s a little weird for an adult but what can I say, I like it?

OP ended up drinking the entire half-gallon because he was nervous, and eventually his uncle called him out on it.

Everyone made a big deal out of it, joking around, which made OP a little uncomfortable but he seemed to deal with it just fine.

So I poured myself some when everyone else was drinking alcohol. And I guess I was feeling nervous and a little tense being in a group where most people were drinking heavily for the first time since I’ve gotten sober, so I kept fidgeting and nervously drinking from my cup. Honestly a lot like how I’d compulsively drink alcohol in the past.

Before I knew it my uncle was like “damn you just drank all that milk?”and he was pointing out the empty bottle. I was like “Damn, guess I did” and my uncle started calling everyone’s attention to that? Which was kinda embarrassing because I’d just been doing it to avoid liquor.

But I guess it became a running joke among everyone there, like people just started talking about it? IDK why, it honestly doesn’t seem that interesting to me.

He didn’t think much of it until his sister (who’d gotten married) got angry, accusing him of trying to steal the show or her attention or something with his “stunt” and his parents piled on.

But anyway, the day after the wedding, Emmy confronted me saying that she didn’t appreciate the “stunt”I pulled. I was confused and she said that the heard I drank a gallon of milk and didn’t puke. I said it was a half gallon. She didn’t find that funny and was convinced I was doing it as a joke.

She doesn’t believe me that I wasn’t trying to draw attention or play some dumb prank. Like even as a prank it makes no sense. What’s funny about drinking a slightly weird amount of milk? It’s kinda boring

But my parents are taking her side and think I did something shitty.

AITA for drinking a half gallon of milk at my sister’s wedding?

He seems utterly confused about this turn of events and is asking Reddit whether or not he somehow did something wrong?

Let’s find out what they have to say! 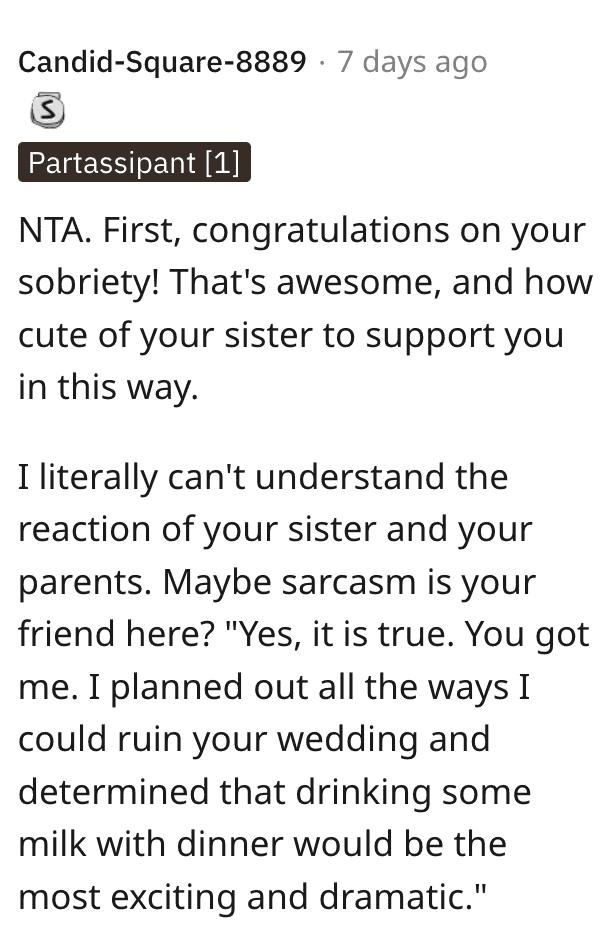 And his family was not very respectful about his recent sobriety and how he might have been feeling. 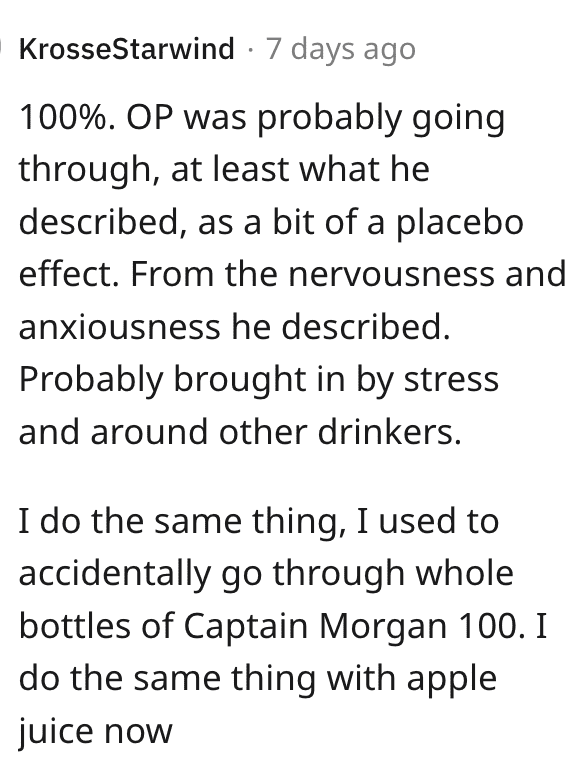 People who have been there think his family needs to chill out. 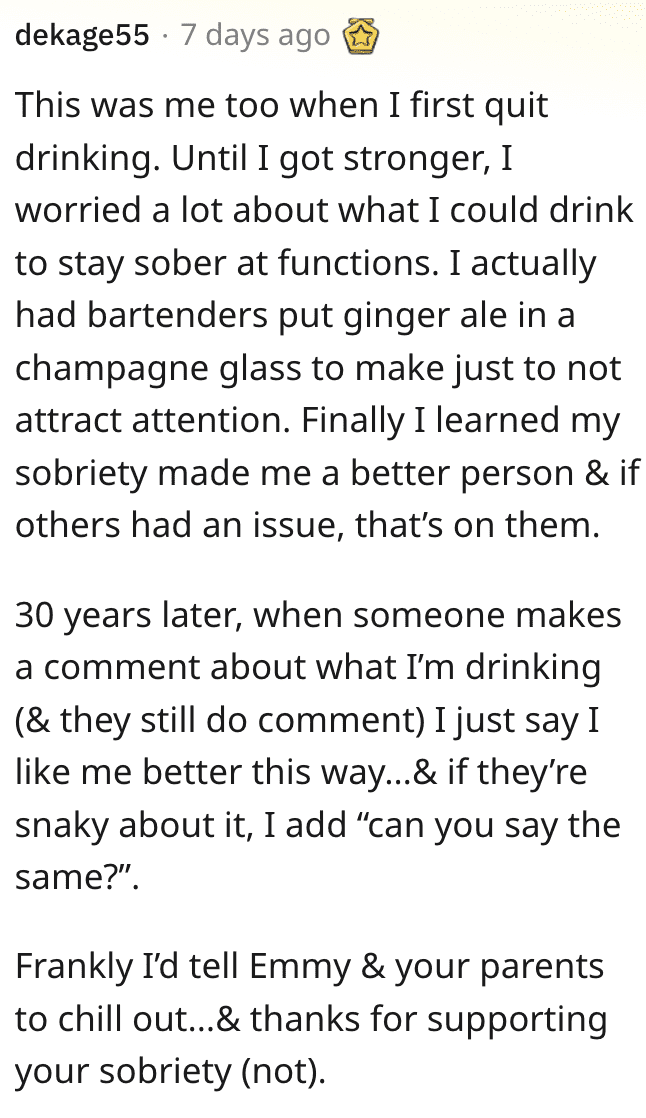 It’s really a sad state of affairs if you think about it. 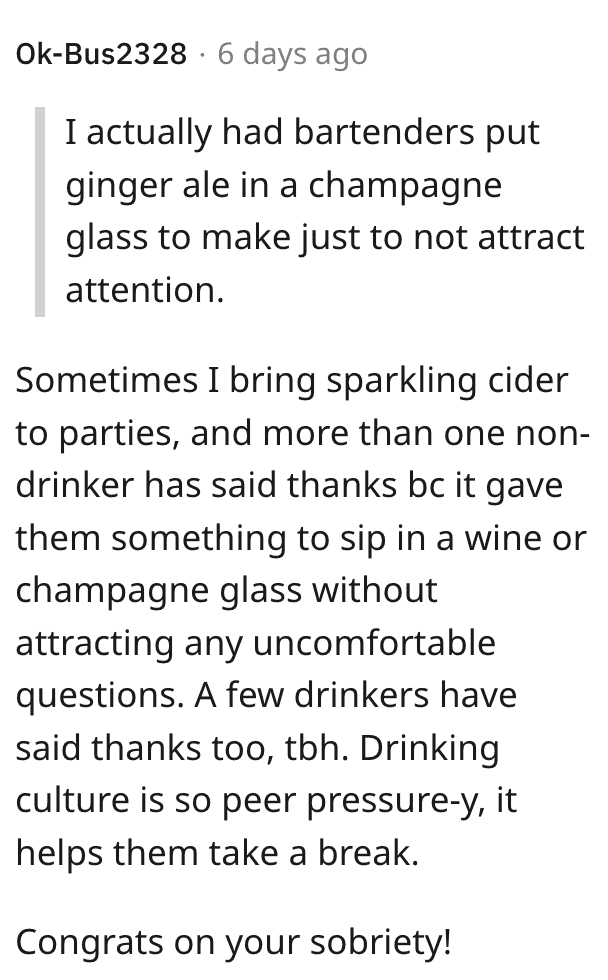 It’s not as weird as OP’s family seems to think.

I don’t care how strange someone’s coping mechanisms seem, I think you have to support their sobriety.

How would you defend this guy if you had been there? Let’s practice being good citizens in the comments!