‘White Lives Matter’ rallies flop as hardly anyone shows up 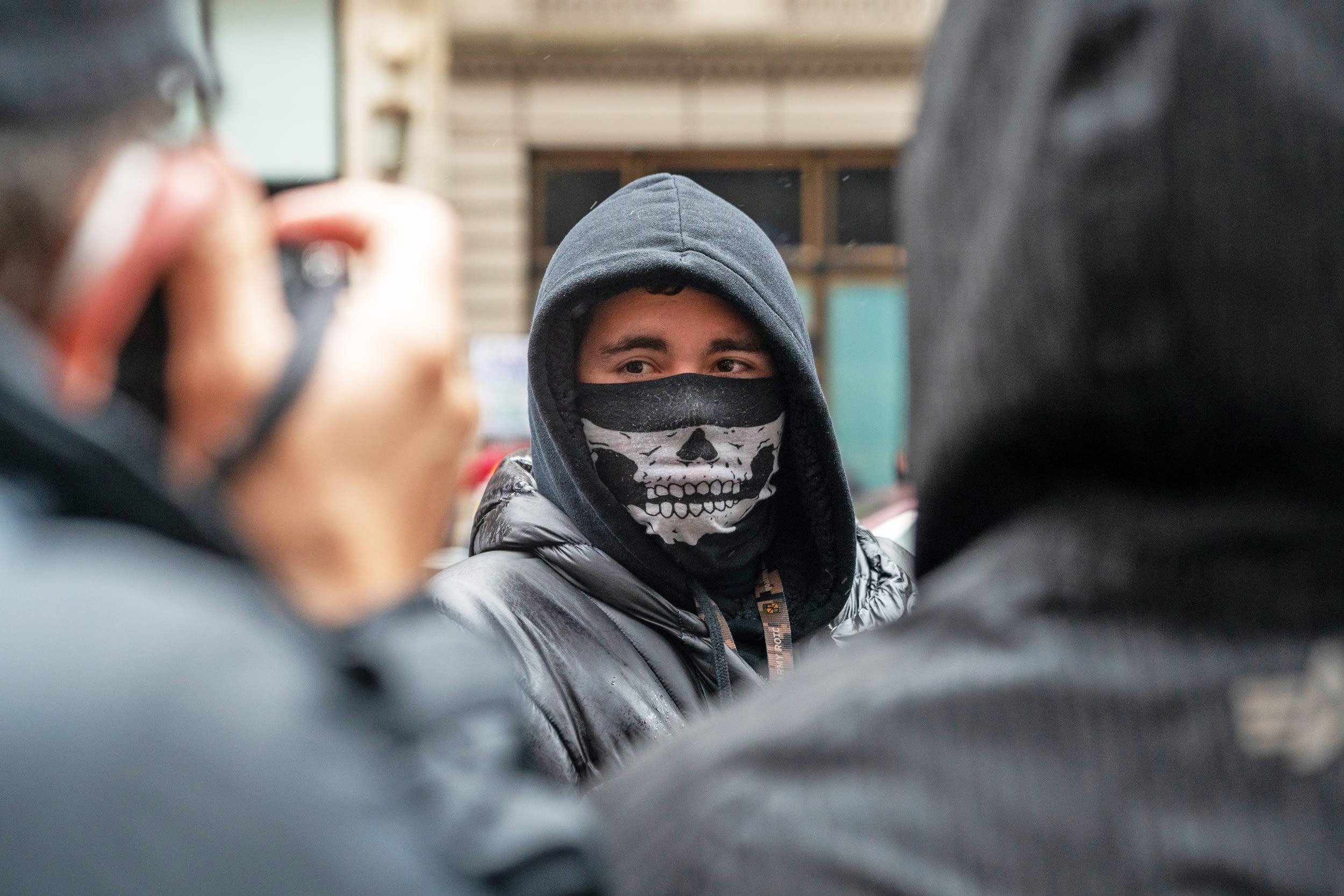 In semi-private, encrypted chats, neo-Nazis and other far-right extremists planned rallies in dozens of cities on Sunday to promote their racist movements and spread their ideologies to larger audiences.

Hyped by organizers as events that would make “the whole world tremble,” the rallies ran into a major problem on Sunday: Hardly anyone showed up.

The “White Lives Matter” rallies, planned on the encrypted app Telegram, were the first major real-world organization efforts by white supremacists since 2018, and after many aligned groups allegedly participated in the Jan. 6 storming of the U.S Capitol.

The poor showing underscores how the nation’s unpopular and disorganized extremist movements have been driven underground by increased scrutiny from the media, law enforcement and far left activists who infiltrate extremists’ private online spaces and disrupt their attempts to communicate and organize.

In Raleigh, North Carolina, a small crowd of antifa and anti-racist protesters gathered at the park where the “White Lives Matter” march was planned. They marched around downtown behind a large white sign that read, “WE ACCEPT YOUR SURRENDER.”

The lackluster events were documented by livestreams and photos posted to Twitter.

In Philadelphia, activists tweeted photos of a counterprotest picnic with pizza and Tastykake snacks. In New York City, over a dozen counterprotesters stood seemingly unopposed across the street from Trump Tower, where a “White Lives Matter” rally was expected.

Police in downtown Albuquerque, New Mexico, formed a circle around a lone protester to separate him from a large crowd of counterprotesters. Three protesters assembled around a “White Lives Matter” banner outside the city hall building in Fort Worth, Texas, where a police line separated them from a couple of dozen counterprotesters.

Hundreds of counterprotesters, bystanders and media members gathered at a counterprotest at the scheduled start time of a “White Lives Matter” march at Southern California’s Huntington Beach Pier.

Throughout the afternoon, counterprotesters could be seen on several livestreams chanting “Unity and community,” and “Black lives matter.” A few single protesters, one who wore a full hood and a T-shirt with a white supremacist slogan, were run off by the crowd, who yelled “Go home, Nazis!”

According to fliers for the event — which recycled images from old propaganda from the disbanded neo-Nazi organization Vanguard America — the marches were meant to “take a stand” against the media, government and educational institutions that are “anti-white.” But the slogan “White Lives Matter,” has been promoted on fliers and banners by white supremacist groups, including neo-Nazis and Ku Klux Klan groups since 2015 as a “a racist response to the Black Lives Matter movement,” according to the Anti-Defamation League.

Sunday’s round of racist rallies seemed destined for failure, according to Megan Squire, a computer science professor at Elon University in North Carolina who tracks online extremism.

The online organizers of the North Carolina rally were uninformed about state law governing protests, including ones that disallowed firearms, Squire said. The organizers were also generally inept at using Telegram, where the event was first announced, and unable to identify “obvious trolls in their midst.”

The efforts behind Sunday’s rallies were “haphazard and ill-informed,” Squire said. “They’re not sending their best.”

The “White Lives Matter” rallies were disrupted in various cities after activists infiltrated their online groups and leaked internal chats to journalists. Those chats reportedly indicated the events were being planned by the extremist group Proud Boys and self-described fascists and Nazis who were framing the rallies as peaceful and unaffiliated with known hate groups in a bid to recruit more mainstream members to their causes.

Organizers in several cities canceled events after sabotage by antifa activists. Raleigh’s organizer called off its rally on Friday, telling subscribers “it turns out that the 11th is a disaster.”

Two of the largest Telegram channels dedicated to events in Philadelphia and New York City were shown to be traps created by an anti-fascist activist, who posted a warning on Saturday to would-be rally goers: “Given how riddled these chats are with antifascists … it might be time to rethink whether you really want to trust a bunch of anonymous internet weirdos to show up with you in your city.”

Ineptitude of organizers notwithstanding, experts say the U.S. extremist movement is at an inflection point, and would-be participants are discouraged by the increased negative attention and criminal prosecution of members in such movements after the Capitol attack.

The white supremacist movement faced a similar reckoning in 2017 after the “Unite the Right” rally in Charlottesville, Virginia. Instead of unifying distinct brands of white supremacist groups, the murder of counterprotester Heather Heyer and the full-throated hate on display from tiki-torch wielding neo-Nazis invited national condemnation, legal troubles and in-group squabbling that fractured individual organizations and the hate movement overall.

After Charlottesville, there were “weak attempts to revisit former glory,” Squire said, recalling rallies where a handful of white supremacists who had led the alt-right movement were outnumbered by anti-racist counter protesters. “The wind was knocked out of their sails and the legal cases brought that fall certainly didn’t help.”

Hate hasn’t disappeared, but membership in formal extremist groups may have been disincentivized. So far, 369 federal cases have been brought against people for alleged involvement in the Capitol Hill siege, according to a database maintained by the Program on Extremism at George Washington University.

At least three-dozen of those charges are being aimed at members and associates of the pro-Trump street fighting gang, the Proud Boys, and the OathKeepers militia group. Both face allegations of coordination between far-right groups and the most serious of federal charges related to Jan. 6, including conspiracy to breach the Capitol.

Beyond legal consequences, self-described antifa activists have made it costly to be associated with far-right and racist groups, many using online sleuthing to match participants at extremist rallies to their real-life identities and employers.

Mainstream online platforms where extremists were once welcomed have also tightened their policies on violent extremist content and groups.

“Not only have organized larger groups splintered, but so too did their social media footprint,” said Brian Levin, director of the Center for the Study of Hate & Extremism at California State University, San Bernardino. “Some extremists continued a whack-a-mole migration underground to encrypted, affinity-based platforms, while others exited these movements altogether.”

The realignment and lack of cohesive leadership doesn’t lessen the threat from extremist groups, however.

The risk now, Leven says, can be found in “loners and cells, who act on their own combination of hatreds and idiosyncrasies often cobbled together from a constant all-you-eat buffet of stereotyping and conspiracies that still populate online discourse.”

Man arrested after Houston tiger seen on lawn, but whereabouts of animal not known