When you’re 17 on Arte: how did this collaboration between André Téchiné and Céline Sciamma come about? 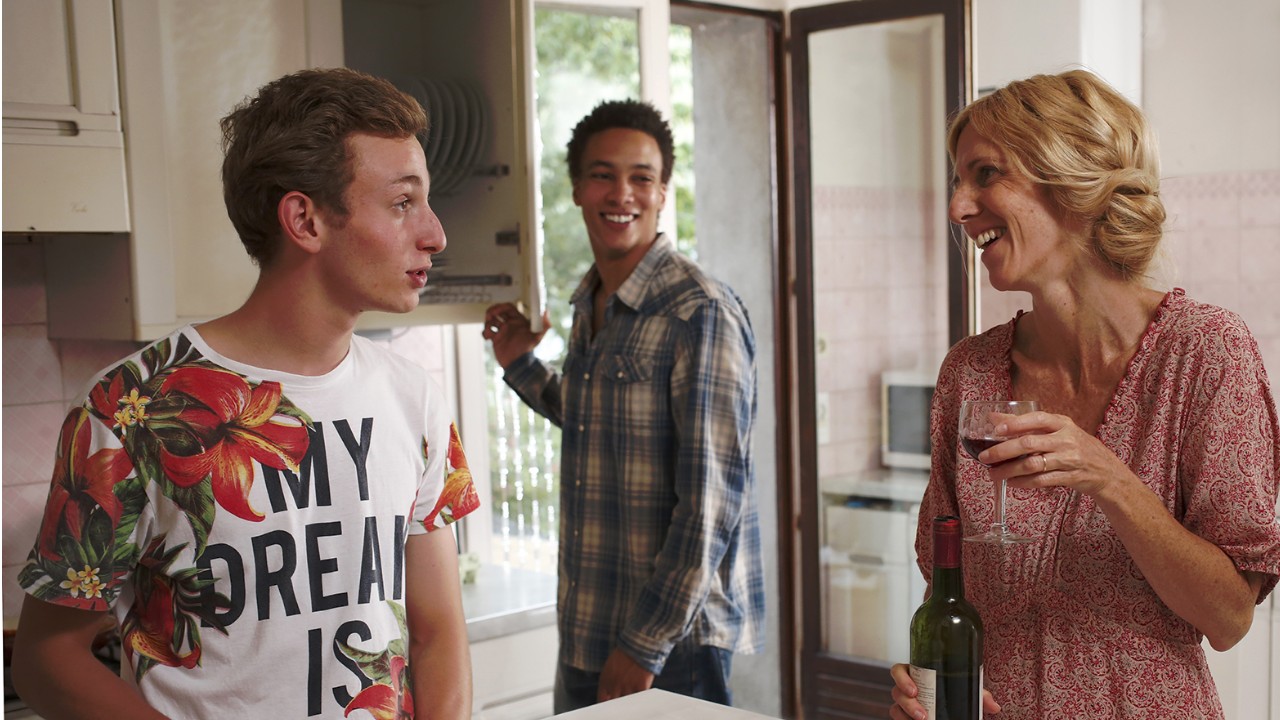 Arte is broadcasting “Quand on a 17 ans” this evening, with Sandrine Kiberlain, Kacey Mottet Klein and Corentin Fila. The film’s script is the result of the collaboration between André Téchiné and Céline Sciamma, co-scriptwriter of the film. Back to this association.

The story of When you’re 17: Damien, 17, son of a soldier, lives with his mother, a doctor, while his father is on a mission. In high school, he is manhandled by a boy, Tom. The violence Damien and Tom show towards each other will evolve when Damien’s mother decides to take Tom under their roof.

When we are 17 years old by André Téchiné, selected at the Berlin Festival in 2016, marked the unprecedented collaboration between two generations of filmmakers, André Téchiné and Céline Sciamma, co-screenwriter of the film. For the film’s release in March 2016, we invited them both to discuss their work and the birth of their artistic collaboration. Discover an excerpt from this interview (to find in full here).

AlloCiné: What is the first artistic memory that you have of each other?

Celine Sciamma : It’s My Favorite Season, which is André’s first film I’ve seen in theaters. Then, very quickly, I saw it all, as best I could because there were no DVDs. I saw My favorite season, The Wild Reeds, and I went back in time. I had stolen the My Favorite Season poster which was large in my room.

And you remember a click after seeing this film …

CS: Yes, absolutely. It is one of the first auteur films that I went to see alone in the cinema. This is the start of my independent film enthusiast, not taken in by family or school. It is almost the very beginning of a ritualization of my life, of my daily life around cinema. It is very striking. We remember the first films where we understand the staging, we understand the vision, where it is a choice to go …

Was it the vision of the poster that triggered the desire to see him?

CS: It was Catherine Deneuve. I repeat it all the time but I will never tire of repeating it because having fallen in love with Catherine Deneuve is potentially becoming a cinephile: we discover Bunuel, Téchiné, Truffaut, Demy… The list goes on and on. It’s a beautiful panorama of the authors who matter. To follow Catherine Deneuve is to go on a trip to the cinema. He was my guide!

And for you, André, what is the first artistic memory you have of Céline Sciamma?

André Téchiné : For me, it was chronological. I did not see Birth of the Octopuses (Céline Sciamma’s first feature film, Editor’s note) when it was released in Paris, but in Turin where the film was very well received. I think there was also a pretty striking actress in this film, right? A prototype, which really caught my eye. It is obviously Adèle Haenel … (André Téchiné directed it in his previous feature film, The man we loved too much, Editor’s note.) (…)

Afterwards, I saw Tomboy who I found overwhelming. In Celine’s gaze on adolescence, there was something that appealed to me a lot. And even to seduce is a little weak. It was a kind of delicacy and luminosity. Because most films about adolescence, when they are interesting, still have more of a melancholy and sometimes even suicidal side. I am thinking of great filmmakers like Olivier Assayas or Gus Van Sant.

In Celine’s films, there was a kind of call for air and a call for emancipation, something that meant that we didn’t come out weighed down, that the cinema kept its enchanted character. And that made me really want to know her and try to build a relationship with her at work.

As I also knew that it would be a sort of portrait of boys, it was good that there was a mother in the center, who is played by Sandrine Kiberlain. But already in the first stage of writing, for me, a woman was necessary, and the woman who stood out with her talent was necessarily her. (smiles) You know, I didn’t have much of a choice either (laughs). No, no, it’s for fun!

Read Also:   The Prince of Bel-Air: we know who will reprise the role of Will Smith in the reboot

CS: This is my chance! It is the lack of choice that creates my opportunities! (laughs)

Sometimes, we feel that there are affinities between filmmakers, screenwriters, actors… But there may be a fear of saying “I would like to work with you”. Did this happen naturally for you?

CS: We met to work, in a commission around short films against homophobia (Céline Sciamma made a short film for the 5 films against homophobia collection, Editor’s note). But we had crossed paths. (…) There was a proposal. There has not been a great enterprise of reciprocal seduction. We saw each other over a matter of work. We shook hands at the end and said “yes”. ” We try “. And the next time, we saw each other to work. It was extremely concrete, simple. It is an alliance, a generational alliance.

AT: Generational, it’s true. But also a kind of curiosity to know how we were going to agree and manage to make the same film together. It was really very exciting. I immediately saw who I was dealing with, that is to say not at all to a yes-yes what. It was also very stimulating that a writing partner could have responsiveness and a critical eye on what I could possibly come up with. In the same way that I was not shy about what she offered me too. (…) We were not afraid to hurt ourselves narcissistically. It’s always difficult when you don’t know the writers, this part of narcissistic wound. We bring you a gift, proposals … How to measure the work done, which is completely defensible, and at the same time reject it, say that we do not want it? That is really very hard. However, strangely, while we have reciprocally refused proposals from each other, and we have had in a very dynamic way many disagreements, it never spilled over into an author’s susceptibility. I don’t know how we escaped this.

And this is important! So as not to find yourself accepting things that you don’t want …

AT: It’s important – it had happened to me through other, less happy experiences – because afterwards we have to deal with the grievance of the injured author. It can contaminate the working relationship. But we did not fall into these traps at all.

CS: Yeah, it took a year altogether. A year in which we each finished our respective films [L’homme qu’on aimait trop pour André Téchiné, et Bande de filles pour Céline Sciamma]. And since the shoot was in two parts [en hiver et en été, Ndlr.], we rewrote a bit in the middle together. It was very intense. It was smoothly over time. It wasn’t flowing writing, it was very concentrated. (…) We have temperaments that are compatible. Perhaps it is the temperament of the great melancholics, but we always try to go towards joy. This is the place where we came to an understanding.

AT: And then, it was also selfishly useful to work with Celine because I assumed she could bring me unity. I like it when it goes all over the place. I like the digressions, the sub-stories, the crossroads of history… I love it. I knew, without it being in the conflicting mode, that with Celine that there would be a purity of the line. In this film, the simple and straight side, I owe it to Céline’s presence in the script, which has a great sense of concentration and unity. It’s not a compliment, it’s a fact.

You anticipated my question… What do you think you brought to each other?

AT: Unity, that’s it. Minimalism. I tend to be a bit too baroque and overabundant.

CS: He told me so, so I knew I was summoned to that place.

CS: The questions of disagreements that we can have on fiction are also those that we can have in our relationship to the world. Does fiction lie? Is she telling the truth? I got into Téchiné’s relationship with cinema, his relationship with characters… And that moved me. We will see how much that moved me in my own work. I allowed myself, for example, in the dialogues of more literary things … Things that I like but that I did not necessarily allow myself …