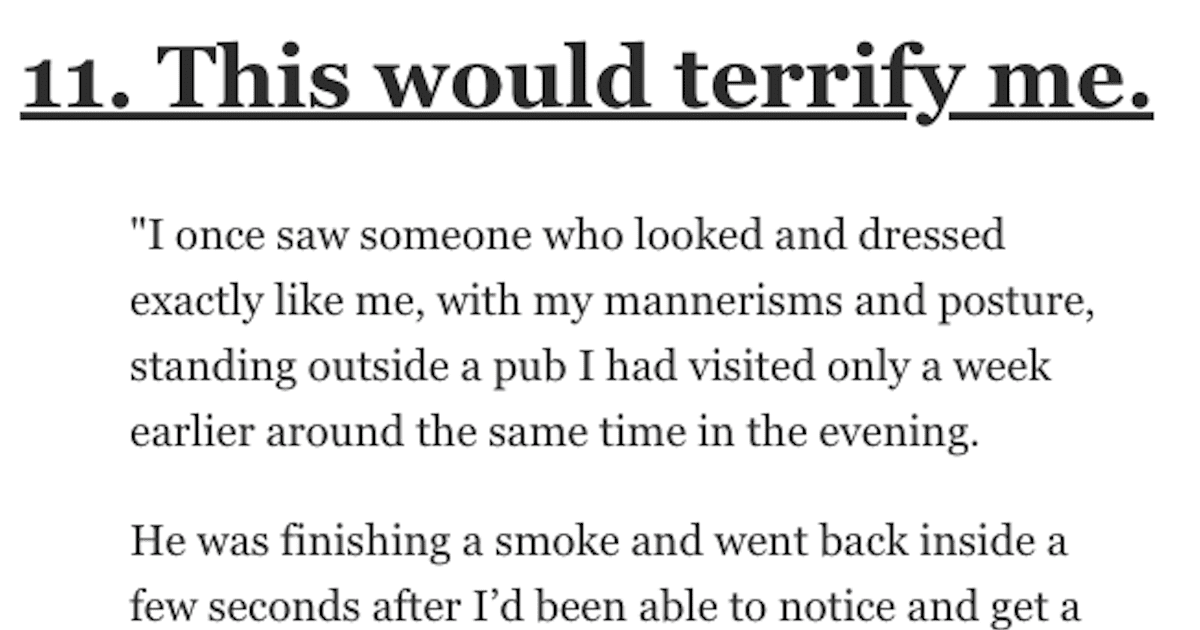 A friend of mine swears that he was once driving down a relatively busy street at night when suddenly he saw an airplane that was on fire fall from the sky and explode in the distance.

This was before cell phones, so he rushed home and turned on the TV expecting to see something about it on the news. And there was nothing. And he never heard anything about it.

Had he hallucinated? This happened over 20 years ago and he still talks about it…WEIRD.

Folks on AskReddit talked about the weirdest things they’ve experienced that they can’t explain.

It may have been through ignorance but I had looked high and low for 4 bolts that needed replaced on the U joint. They were special and shouldered.

I stopped everywhere looking for these bolts. Chevy nor Izusu had them. I was at my wits end as I had been looking for two months .

One day a buddy of mine and me stopped at a hamburger joint that had a parts store next to it. We got out and I said I am gonna check this parts store and i had one the bolts in my hand .

As we were walking to the store , a guy that I can only describe that looked like the Jesus your grandmother had a picture of on her wall walked by us and said howdy or some sh*t .

But here is what freaked me out…

He said, those look like they are U joint bolts for a Chevy LUV pickup . I bet you are having a heck of a time (yes he said heck) finding them . Come over here I think I have some in my truck .

He walked over to his truck looked in a 5 gallon bucket and handed me 4 perfect bolts exactly like I needed.

My jaw dropped. I tried to pay him or buy him a hamburger and he said no , just help someone else out if you get the chance . That was 28 years ago and I remember it like it was yesterday.”

“For about 10 years a man would call my home, ask for me, and then ask me if my feet were ticklish.

This was 30 or so years ago – no caller ID or anything like that. I would engage him if my family was home. If I said my feet were ticklish he’d ask me to ask the person sitting closest to me to tickle them. He always hung up before we could ask questions to figure him out.

Sometimes he’d get me on a pay phone. Like, I’d be walking home from school and a pay phone would ring. It was always him.

Still don’t know who it was…”

“I had a dream one night that a former coworker (Friend 1), who I rarely interact with, was pregnant.

In the dream I was back at my old office and they were explaining to me that I was going to fill in for her. I was very alarmed and like “oh heck no, I left y’all last year and went to new place.” She came up and was very pregnant and was like “oh come on it’s just while I’m on leave.”

I told my husband because it was weird and we joked about how awful it would be for me to have gotten out of that workplace just to have to go back.

Maybe a week later I dreamed about a different friend (Friend 2) I rarely speak with being pregnant as well.

The next week I run into Friend 1 somewhere and joke about the funny dream I had where she was pregnant. She is like OMG tells me she is and they haven’t told ANYONE yet, that she’s waiting. I laugh it off and later tell my husband about it. He jokes and is like “didn’t you dream Friend 2 was pregnant, lol you should give her a call.”

It’s even funnier because Friend 2 is my age and like me has older children, we’re waaaay too old to be starting over. I laugh it off.

The next day, as an afterthought, I’m bored and driving a long distance, I call Friend 2 about the funny dream and my husband’s joke that I should call her.

Turns out she IS ALSO PREGNANT and they haven’t told anyone because they’re having ultrasounds and amniocentesis first due to her age and all.

“Years ago, when my wife was pregnant with our second child and about to give birth, my Mom came to stay with us for a few days to help take care of our oldest child.

One early evening Mom asked for a pen, paper and an envelope. When I gave them to her she wrote on the paper, sealed it in the envelope and gave it to me, saying put this in your pocket and don’t open it. “You’ll know when,” she said.

Thirty minutes later my wife announced it was time to go to the hospital, she was in labor. So we did and about 9 hours later our second daughter was born at 3:45AM. She weighed 8 pounds, 11 ounces and was 20 inches long.

This being pre-cell phone days, I called my Mom from the hospital to tell her the news. She answered the phone and immediately said, “Before you say anything, open the envelope.” I did. It said:

I kept that paper for years. When my Mom died, I went to our documents safe where we kept it, but it was gone.”

“A week before my twin brother died I was in the passenger side of the car and an awful thought with visuals that popped in my mind.

I was at his house and it was empty, his door was shut but I had an overwhelming feeling he was no longer alive. It was the first time I’ve cried over just a thought.

I also had him visit me in a dream after and ask where he was and he didn’t know he was dead yet I showed him his death certificate and all the paperwork my mom was filling out.

I can’t explain it but seeing that a week ahead helped me process his death better than my siblings and mom. His 10 yr is coming up in March and I’ve been trying to dream about him no luck.”

“Living in a dorm, no roommate.

Night before a two-hour open book final, I put my book in the middle of the floor so I’ll stumble over it on the way out. The floor has nothing else on it.

In the morning its gone. I look all over the room, can’t find it. I think I’m hysterically blind, so I feel over every inch of the floor with my hands. Nothing. I go get a cup of coffee and come back, still nothing. By now there’s only one hour for the test. I go any way and do the best I can.

Naturally when I get back the book is in the middle of the floor exactly where I put it .

Probably a prank, but how? I’m not that heavy a sleeper. Nobody took credit for it.”

“My family used to travel between Utah and Nevada a few times a year when I was growing up and we often saw wildlife.

There’s one thing that still baffles all of us, though: It was in the middle of the day, on a long, hot, empty stretch of road.Myself, my mom, and a couple of my siblings saw something scurry across the road.

It looked like a huge egg (the size of an ostrich egg, maybe larger) with two skinny legs and feet poking out the bottom of it. We cannot figure out what it possibly could have been.”

“A friend and I were driving what would normally be a 3hr drive. A little way in, we hit the heaviest rain/lightning storm I’ve ever driven through.

I was driving about half the speed limit and could barely make out the car in front of us. When that car pulled over (clearly wasn’t confident driving in that weather) I drove on for about 15-20mins before also pulling over as we passed a small town. The rain eased off and we continued on our way.

When we got home, according to our phones/the wall clock in the house/the car clock – the trip had taken less than 2hrs. We had somehow shaved a whole hour off the trip by going almost half speed for most of the way.”

“I sneezed my back into place after being couch bound for nearly a year and half.

Within 15 minutes it felt like that year and a half was a distant memory.”

“I was once standing in line at Target.

A mother and her (I guess) three year old were in front of me in the checkout lane. I never met them before in my life. The child was riding in the shopping cart and the mother went forward to better unload it.

The child looks dead at me, smiles, laughs and said my first name, very clearly, twice. I have an uncommon first name, which made it even stranger.’

“I once saw someone who looked and dressed exactly like me, with my mannerisms and posture, standing outside a pub I had visited only a week earlier around the same time in the evening.

He was finishing a smoke and went back inside a few seconds after I’d been able to notice and get a good look at him. I smoked at the time as well, so it was something I’d have been doing.

Not sure if I saw a glimpse of my own past from a third person perspective or what, or if I just have a twin somewhere in Dublin.”

“My dad, sister and I all saw something that wasn’t an animal and wasn’t human. This was in winter 2015 in rural Saskatchewan.

We were driving and it ran out in front of us on the road. It was so fast it was a dark blur but we all agree we saw long gangly limbs like a deer but it had human looking “arms” and “legs”.

We still talk about it.”

In the comments, please tell us about the strange things you’ve seen that you can’t explain.