What’s The Best Way To Confront A Copycat Coworker?

It can be amusing sometimes to realize that adult humans can sometimes backslide into the same petty, junior high crap we all swore we couldn’t wait to leave behind. It’s human nature, I suppose, and maybe it’s not so funny when it happens to you.

At least, that’s what this fashionista realized when one of her coworkers started copying everything she wore to the office.

OP is a self-described fashionista and runs a blog. Normally, then, she expects and even enjoys people asking where she got her outfits, but this one coworker of hers is taking things too far.

Read this first, too many comments trip on this one Edit 2.2 She is not my follower shes my close coworker and that’s the beef, its only at-work problem until shell start her own blog cloned from mine, which is what worries me as well as what people at work think. Also calling out is the wrong term, im sorry!!! I mean confront

I (21F) started a new job in winter. I have 4 other coworkers on my project whom with i work together and its been a blast. If only there wasn’t this unusual annoyance.

Im very into fashion and have established a very certain style. I try and run a fashion blog that i wont be naming here, and the reason i mention this is because i want to emphasize the fact that I normally wouldn’t have an emotional reaction to people asking where i got my clothes since thats kinda what i do.

It began with her asking where she got her earrings, then her coat, and some shoes, until a few months went by and they basically had all of the same outfits.

OP didn’t want to be bothered, but she also didn’t want her coworkers to think the copying was going to opposite direction.

One of my coworkers (F22, Lets call her H) is very comfortable copying me. This started out very innocent, with her asking where I got my earrings from. Soon she had bought those herself. Thats cool, they are a pair of earrings.

Then one day she was complimenting my coat and i told her it was a real steal since it was in sale in this store. The next day she was wearing the exact same one. This i found a little odd since this has never happened in my circle.

Couple days go buy and she complimented my shoes. At that point i knew where this was going.

Its April now and she has basically copied my whole wardrobe: she doesn’t ask me where my clothes are from anymore but finds similar ones herself. We dont only wear the same pieces to work but the same outfits on different days. Since we dont hang out on free time i hold onto the hope that my coworkers were the only ones testifying this and would have noticed i wasn’t the one copying her.

Things might have gone too far when, after OP posted a hair color/cut transformation on her Instagram, the coworker showed up at the office with the exact same cut and color – and another of their office mates asked OP whether she was inspired by the coworker (instead of the other way around).

The part that drives me over the edge is this. On Friday i got my hair done in a salon, a real treat yourself transformation from brunette to copper. I posted my hair on instagram and H slid into my dms hyping me up and mentioning she should book an appointment too.

I was happy for her as one is and can’t believe i didn’t see the following coming. On Monday we both showed up to work with same copper hair.

I was fuming. The worst part was my other coworker complimenting my hair and asking whether i got it done after liking H’s new hair.

She thought i was the one copying her? I wanted to correct her but was too bazzled at the time.

She recognizes this is a middle school situation, but is wondering whether or not she should confront the woman or just let it go – or maybe address is some other way?

I feel like I’ve had enough. This feels like some middle school stuff. I guess it might be childish to even care and i know you can’t own a style, but it feels like huge part of my identity is being borrowed against my will. I also hate the idea of ppl thinking i’m the one copying her when id never do such thing and am pretty good at coming up with own ideas. I also wouldn’t mind matching sometimes if she were to ask me but she does it every day on her own.

So, WIBTA if i confronted her about this? How should I do it?

Reddit is cracking up, but they’ve also got some interesting advice.

The top comment says just block her and be done with it. 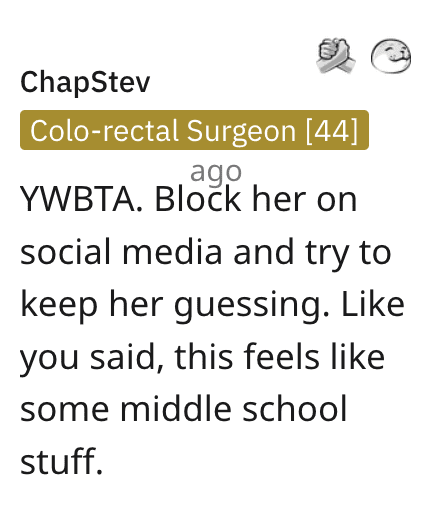 Someone else said she should just be flattered and move on. 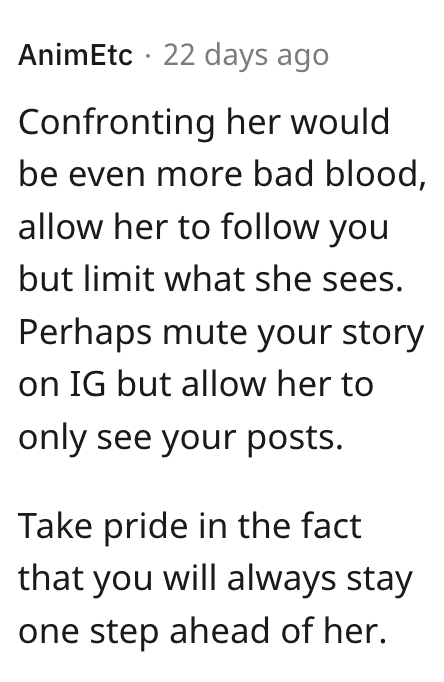 Other people suggested even more petty ways to handle things, like faking her out with a terrible wig… 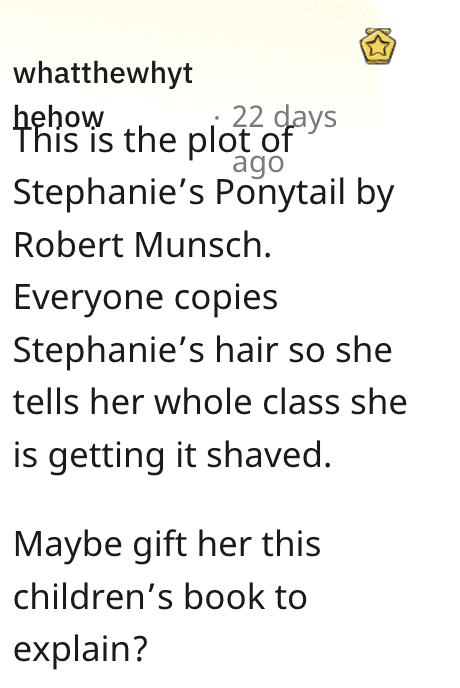 Or gifting a classic children’s book to hopefully teach her a children’s lesson. 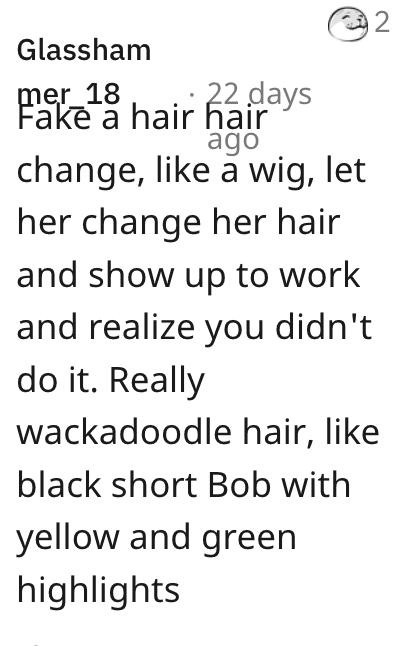 There might be no real way to win, but does it really matter?! 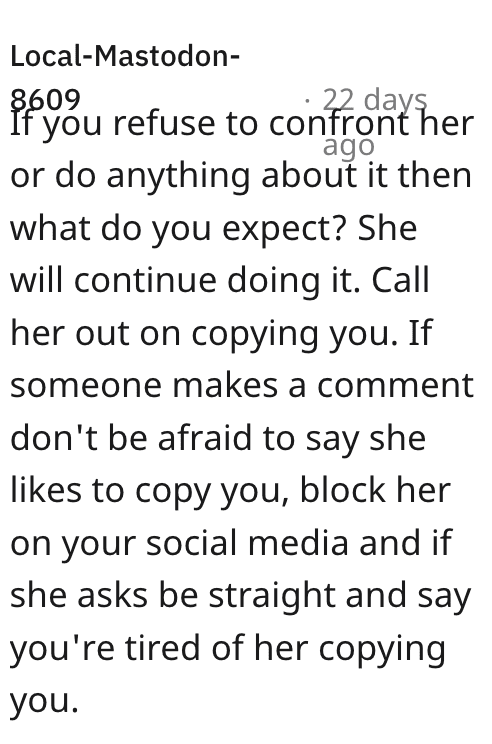 Y’all, this is just silly, but also I think it would annoy me, too?

How would you handle this? Let it go? Confront her? Try to teach her a lesson?