What Should A Dad Do If The Men’s Room Doesn’t Have A Changing Table?

We’ve talked way more about public restrooms and who can and should use which ones over the past couple of years, if you ask me. Everyone just wants to do their business and go about their days, right?

One of the frustrating aspects of parenting for men is that when they’re out alone with their small kids, it can be hard to find a changing station. While many places do offer family restrooms now, some still don’t – and those same places will only put changing tables for babies in the ladies’ rooms, too.

That’s exactly what happened to this guy, who was out with his 5mo when he needed to change a dirty diaper.

He couldn’t find a family restroom and there was nowhere to sit his kid to change a diaper in the men’s room, either.

I am a 31 yo man and was at a large store yesterday with my 5mo son when he did what babies do. I went over to the restrooms and saw that there wasn’t a family/companion restroom, just a men’s and women’s.

I went into the men’s room and saw there was a cubicle and a few urinals, but no changing table. The sink didn’t have a counter either.

After an employee was no help, he went ahead into the ladies’ room to change the diaper.

I walked out and hunted down an employee to ask where the changing table was. She said it was in the bathroom, and I asked where, assuming there was a family/companion restroom on the other side of the store. She took me back to where I just was.

I asked if there was another bathroom, and she said no. I told her I was just in the bathroom and there was no changing table. She asked if I was sure and suggested I look again.

I was annoyed, but I went back in the men’s room. No changing table. When I came out the employee was gone. Keep in mind, my son has been in his poopy diaper this whole time. So I give up and head into the lady’s room which sure enough had a changing table.

The first woman he encountered laughed it off, but the second one freaked out and went to get store management involved.

There was a woman in there washing her hands, and she said “wrong bathroom, buddy.”

I gestured to my son and said “no changing table in the men’s room.” She laughed and said “bro, that sucks.” Then she walked out. So I rush to change him, hoping to be done before anyone else walked in.

I’m almost done when a woman walks in and starts screaming at me. I tried to explain what I was doing, but she kept screaming “Get out! You can’t be here!” Then she ran out.

OP absconded with his baby and returned home to relay the story to his wife, who thinks he did nothing wrong.

I finished putting the diaper on and rushed out of the bathroom. I saw the woman talking to an employee and decided to leave without my stuff. The employee tried to wave me down and stop me, but I rushed out to my car, buckled my son into his carseat and left.

My wife said I absolutely did the right thing, but my mom said I’m an idiot and was 100% in the wrong. My sister won’t stop laughing at me and is no help at all. AITA?

His mother does, though, so he’s wondering what Reddit thinks – and they’re sounding off, as usual!

The top comment says there are definitely a$$holes here, but OP is not one of them.

They should be in both if no family restroom is available. 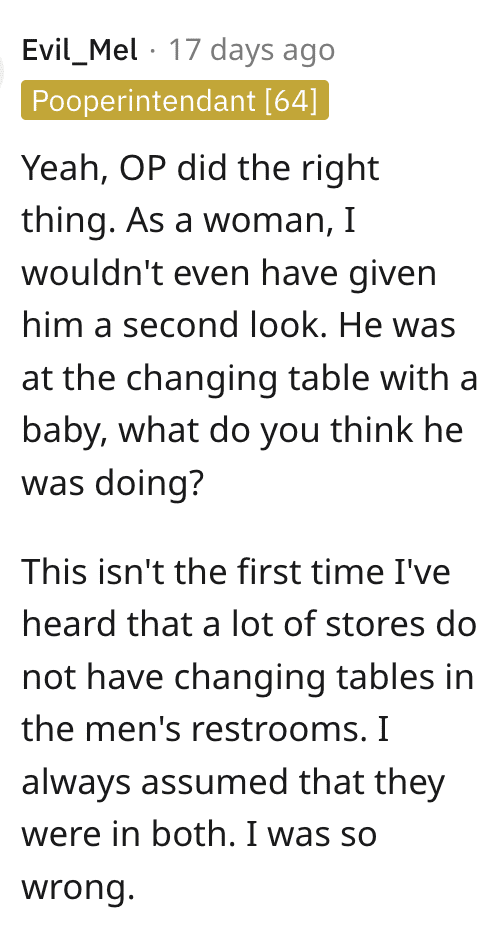 Perhaps a bit of passive aggression is in order here.

Parents everywhere have just about had it. 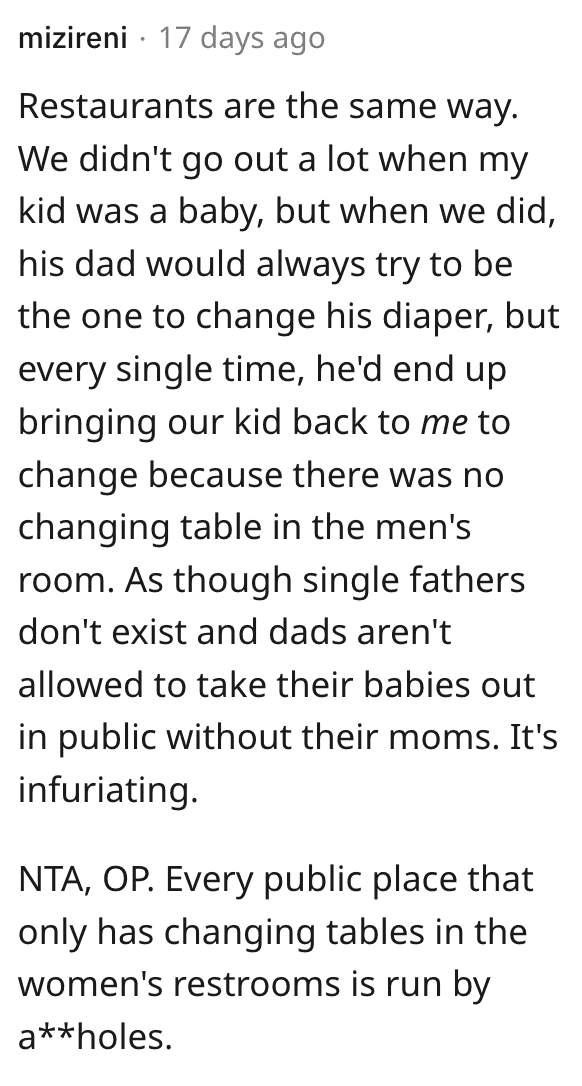 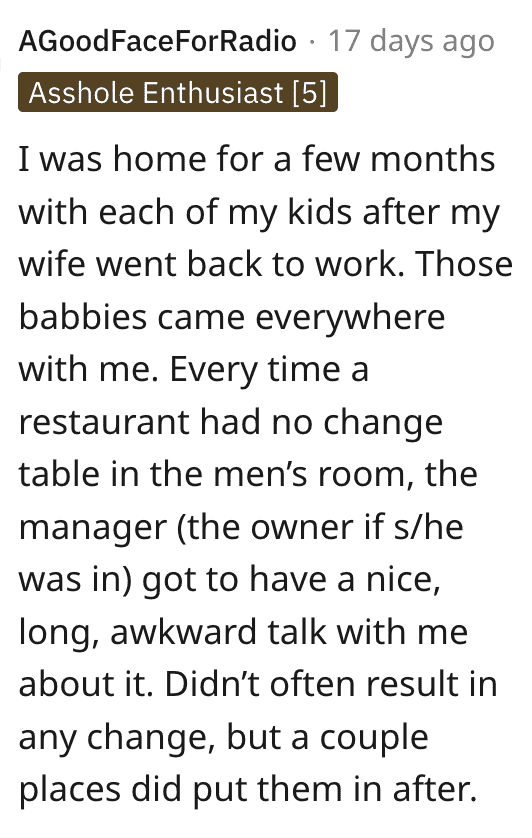 This is definitely a bathroom issue I can get behind, but I promise you, if I walked into a ladies’ room to see a dude changing a diaper, it wouldn’t bother me at all.

What about you? If you’ve got different thoughts, drop them in the comments!