What Loophole Did You Exploit Before Someone Found Out? Here’s What People Said. 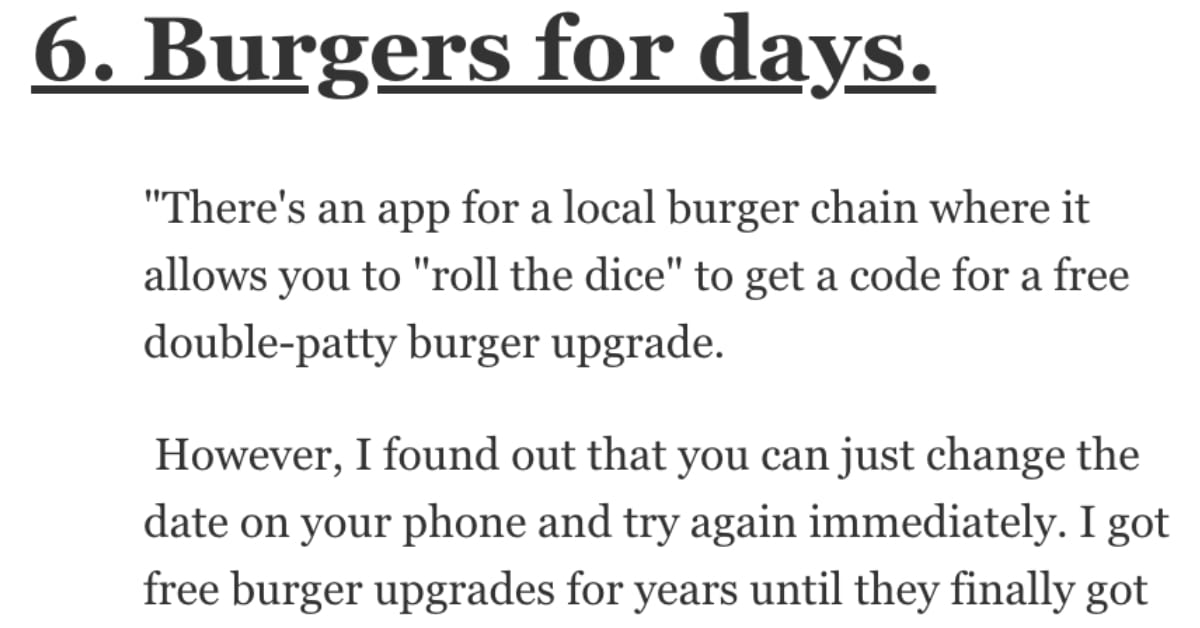 We’re all looking for some shortcuts in life, right?

Something to make our days just a little bit easier and to take the edge off?

And when you find a loophole that you don’t think anyone else is gonna notice, you usually take advantage of it.

Hey, no judgment here, it is what it is!

AskReddit users talked about the loopholes they exploited for a while. Let’s take a look.

“Growing up I worked at a chain grocery store.

They had a policy in place that if an item price label didn’t match the scanned price in the computer, the first item was free and any subsequent items would be for whichever price was lower.

Every few months an elderly woman would come in and spend 4-5 hours shopping. When she would come up to the register, she would have a full cart and near everything would be free.

I had to ring her out a handful of times and only caught a few items overall that she was wrong on. At one point, she found a comforter BBB mislabeled and got it for free ($40-50 sticker price).

More than once the store manager would watch her on the store cameras to ensure she wasn’t switching the stickers but never saw her do anything sneaky, just very calmly looking over every item shelved one at a time.

Eventually the policy changed and she stopped coming in at all.”

Thanks to a charge card i was granted top tier elite status with a hotel chain. I downgraded 6 years ago but the status remained.

The hotel chain went through a merger but since I had retained the status for over ten years I was given lifetime top status in the new program that was created.”

“Used to work at sStarbucks like 7 years ago and they used to print these receipts where if you filled out a survey it would give you a 6 digit code which you could then exchange for a free drink.

However when you gave in the receipt with the code we would just toss it in the garbage and then give the free drink. So over a shift I would just keep all the survey receipts when people didn’t want them, write random numbers on them, then keep a wallet full of free coffee.

Since I already got tons of free drinks, I would give them to homeless people and explain it was good for a free coffee. Probably gave away like 100 free drinks.”

“Local casino issued a $20 free play coupon in the newspaper with no expiration date.

I talked to the newspaper delivery guy and asked him about that copy and he told me he’s got 100’s of them in the van as they were a few days old now. I got all of them, clipped out the coupons and proceeded to make $19.50 every day after work for around 500 or so days.

Not quite years, but pretty d*mn close. The casino never printed a coupon without expiration/one per customer rules ever since.”

“I grew up down the street from Universal Studios and went there every day after middle school. Eventually we learned to go into the VIP line for rides which nobody was ever in.

When the guy stopped us and asked us for our vip tickets, we just told them a high up employee named “Rick” should’ve called it in. After two seconds on the radio trying to verify, every employee just gave up and let us through. We skipped lines for years with that method, and eventually ride attendants came to know us and just let us through. It was beautiful.

One day we got bold though and snuck into the studio area. Guards caught us and asked us who we were with. We told him our fictional “Rick” told us we can be here. Well the guards took radio verification way more serious, and managed to get a real Rick on the line.

We waited for Rick to show up, knowing we were busted. Rick showed up, turns out he was actually the backlot manager at the time and gave us a strange look. The security guard asked us if we were with him and this dude said yes! He took us aside and asked us what we were doing and we told him we just loved film and the studio atmosphere.

He loved that two young kids were interested in his job and began taking us all around to the studios, allowing us to sit in on tapings of various shows and so on, giving us a free pass to come back anytime, and also….VIP line access.”

“There’s an app for a local burger chain where it allows you to “roll the dice” to get a code for a free double-patty burger upgrade.

However, I found out that you can just change the date on your phone and try again immediately.

If you got nothing, change it again and just keep going until you get the code. Then, when you got the code, you change the date back to current date and the app updates the code so it looks like you rolled it today.

I got free burger upgrades for years until they finally got rid of the feature all together. I don’t know if anyone ever figured out this exploit, they removed it for other reasons.”

“My old job i worked at a pretty large gym (gold level, like the 3rd highest level).

Monthly fee was $79 for the gold membership but employees got a free diamond membership. Worked there for a year and a half before i quit, but my account was never deactivated.

Been going there for a while completely free, still not found out. Diamond membership is like $200 a month”

“I used to live in an apartment across the road from a casino while at University. They released an app where if you “check-in” you get points that go towards free food and drinks.

Every Saturday I used to get a free burger, fries and drink and watch sport in the sports bar.

They eventually scrapped the app; it was awesome considering I was a broke University student.”

“Circa Late 1980s. You could make a long distance collect call from a pay phone, and charge it to a private number.

The operator would call the other number to confirm. We’d ask the operator to call the number of another pay phone nearby,and have a friend authorize the call.

“I used to go to this Mongolian bbq spot at the mall that had those thinly sliced frozen sheets of meat that they let you pick yourself and they cook it for you so long as it fit in the bowl they gave you, then choose your veggies etc.

So they used to be kinda “folded” into like ribbons so they’d take up more room in said bowl, well it’s stupid but I realized if I just used the back of my hand/ knuckles I could kinda “crunch punch” the folded frozen meat down and I would back in like a pound of meat when that wasn’t what they had intentioned at all, but since it was in the bowl they had to cook it. So good.

Anyways me and my ex would go like 3 times a week and just get one of those and it would feed us both pretty good for like 5$. Eventually they caught on after like a year and one time we went I proceeded to do the same good ol back handed meat punch in my bowl when one of the workers yelled out to me to get my attention and pointed to my right at a printed paper that had a fist on it saying “no to fist meat” with a circle and a cross going through it.

That was my legacy there and the food was never the same when it was 99.5% noodles. Me and my ex broke up that was the only good thing in that old toxic relationship”

“Arby’s used to have a “take a survey on the back of the receipt and get a free roast beef sandwich”.

But when I got the free one, I got a receipt then too.

I bought one sandwich and got literally dozens for free over the course of a year or so.”

If so, please share your stories with us in the comments.

We’d love to hear from you! Thanks!