What Is A Reasonable Response To A Loved One “Ruining” Your Sheets?

I’m going to need y’all to buckle up for this one, because it is one wild ride that comes – eventually – to a pretty satisfying conclusion (for those of us just reading, at any rate).

OP begins by saying that he and his girlfriend have recently moved in together and generally get along well, because they are both “neat freaks.”

He also informs us that he’s not weird about period blood unless it gets on his sheets. So.

I (M26) have been dating my girlfriend (F24) for about a year now, and we recently moved in together. She didn’t have a lot of furniture and such, so it’s mostly mine in our apartment including my bed (frame, mattress, sheets). I am a bit of a neat freak, and she generally is too, so we get along pretty well living together.

Now I’m not one of those guys that gets grossed out over a woman having her menstrual cycle. I’ve had sex with my girlfriend on lighter days with a towel down. I’ll go buy her feminine products. I don’t get weirded out if she mentions it. I will say though, it totally grosses me out getting on my bed though.

One morning they woke up to a “spot” of blood on the sheets and he flipped out, asking what happened.

His girlfriend was upset (and probably embarrassed) and said she thought her period was light enough that she’d be ok overnight without products on, which only enraged him further.

He insisted she buy new sheets (even though she’d already washed the soiled ones), and she agreed.

Well a few days ago when we woke up I noticed a blood spot on the bed and got totally grossed out. I knew she had been on her period for 3 days already so it wasn’t any sort of surprise accident.

I asked how it happened and she was upset and said she thought she didn’t need to sleep with anything on. I told her that was absurd, why would you go without wearing anything and get blood all over my bed.

They argued because she felt how she handles her period is her business, and that she didn’t appreciate how he talked to her during the whole thing.

She said that she likes to not wear anything when she can. She said she thought her flow was light and she wouldn’t bleed over night. She says I have no reason to be angry to talk down to her over something I don’t experience. I said that she should’ve been more careful with where we sleep and that it was unhygienic

AITA for getting upset and wanting her to pay?

He provided these three updates with some clarifications as to her arguments, as well as his thought process.

ETA: A lot of people seemed confused by what I said ‘not wearing anything”. She was wearing her normal pajamas, just no menstrual products. She said since she’s on birth control she is very light on day 3 and doesn’t ever bleed on the sheets. It still seems unreasonable to me to not have something for extra coverage just in case. To everyone saying to just wash the sheets, she did, but I just don’t like the thought of it.

Second Edit: I obviously see that I was a prick for being condescending towards her and not being sensitive to her embarrassment. I told her I was going to replace the sheets myself. She got upset again saying she didn’t want to financially burden me every time she could potentially have a leak and that washing them was good enough.

I told her I obviously just have a weird phobia with it I need to work through. I did ask her to wear products every night until she knows it’s gone, and she called me ignorant, and had no right to suggest how she handles her period. She’s coming to get her stuff to stay with her mom, so it feels pretty over. I’m sure many of y’all will be happy to hear.

Third: Yep, she says it’s definitely over. I tried taking what some of you said about understanding that the flow fluctuates and all that, but she said the damage was done

His final update is kind of amazing, to be honest, and he sounds like the kind of guy we need more of in the world – the kind to be able to think critically about their own mistakes, recognize that no one owes him anything, and to be able to move on better for the experience.

Final Update: After sleeping on it and talking to my friends and family, I am definitely in the wrong here. I had no reason to be that grossed out and ask her to replace sheets when she washed them.

I definitely had no right telling her she was irresponsible and how to manage her own body. I apologized to her sincerely, and said she definitely deserved better than that. She agreed and is not taking me back, which I deserve.

This was my first time living with a woman and I f**ked up big time. Thanks to the people trying to give helpful advice, and thanks to the sub for showing me how awful I acted. I’m going to take in all of this moving forward.

I shouldn’t have ever seen my apartment as still MY apartment when she moved in. That was awful of me too.

Best I can do is take this all in and learn from it and treat the next person in my life better.

Let’s get down to business, though, and see what replies on Reddit inspired such an epiphany!

There’s no doubt that OP was TA to begin with, but listen. We all hope that he’s really willing to listen and change. 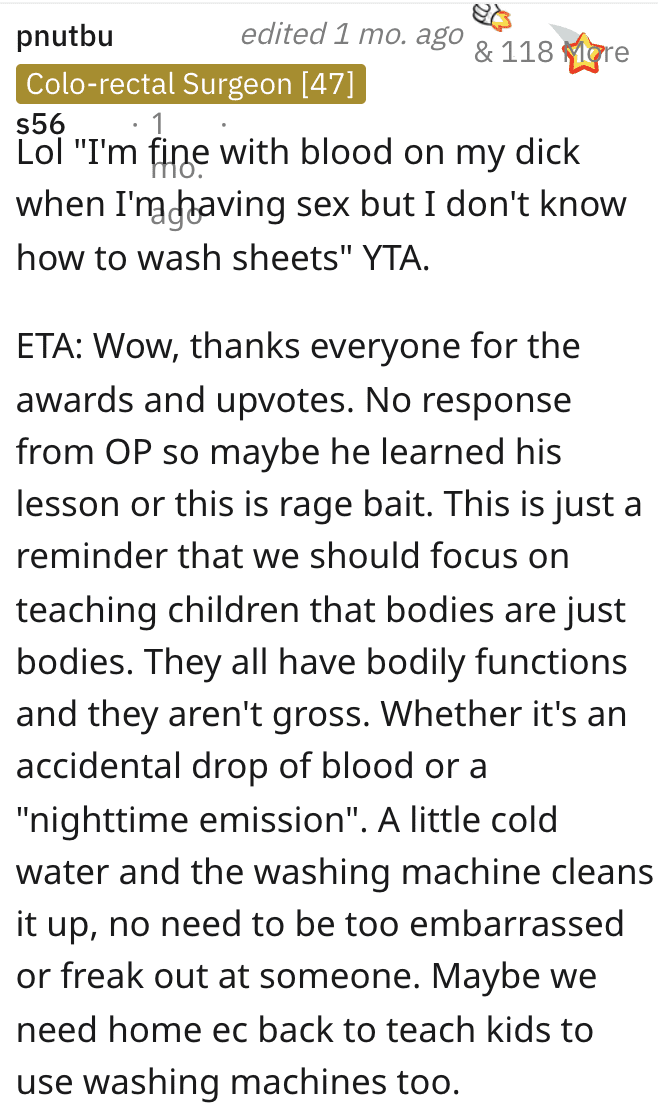 All of us who have actually had a period can vouch for her thought process on not wearing anything to bed. 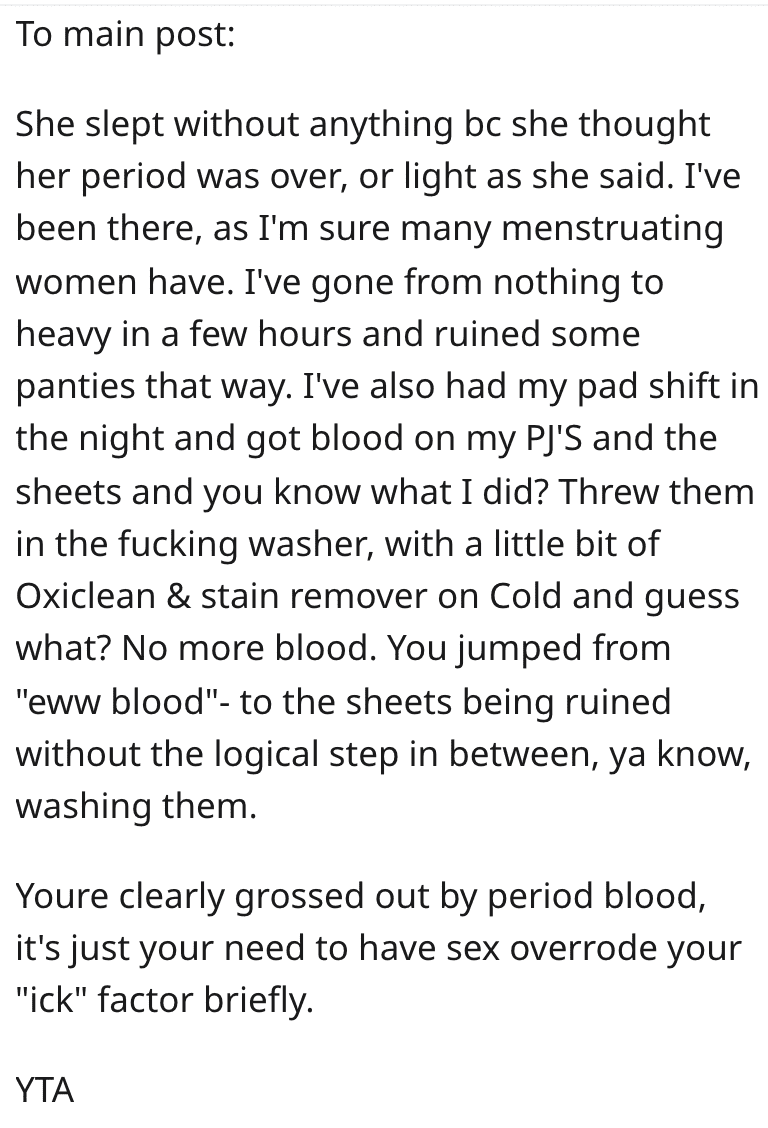 Bodily functions are a fact of life, one that you have to deal with if you live with other people. Period. 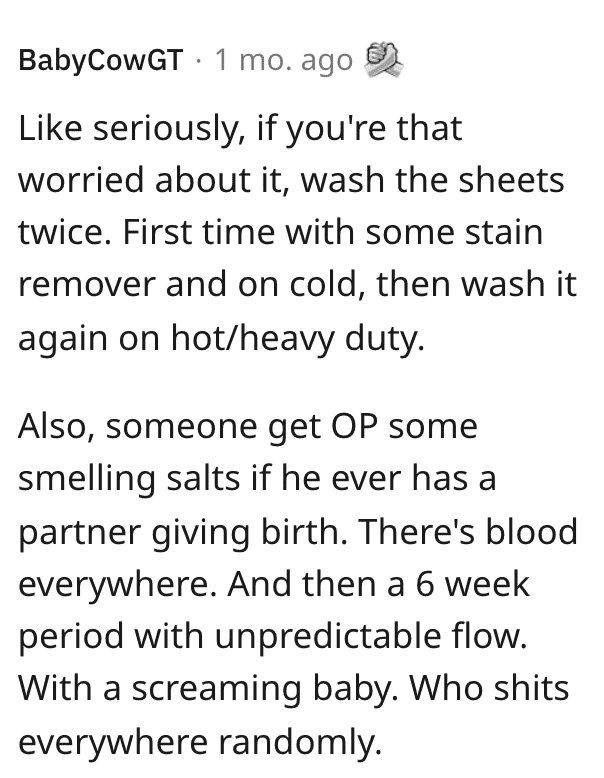 Someone definitely has some growing up to do… 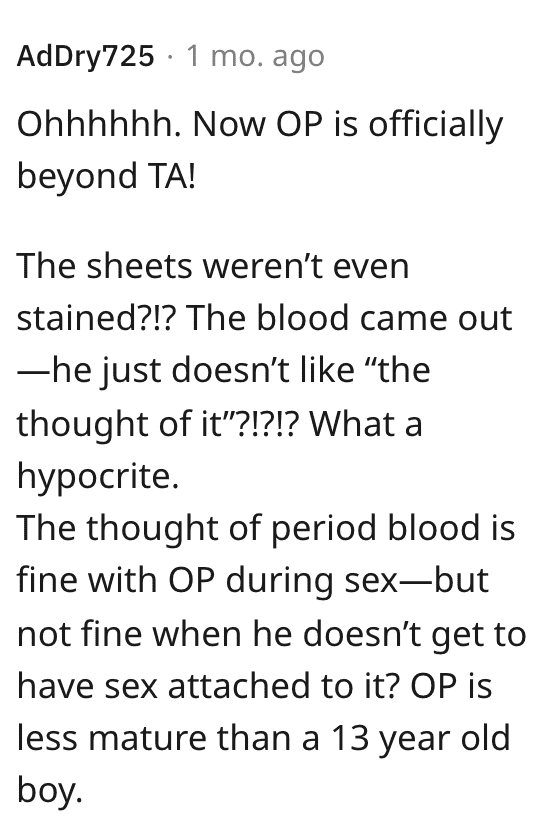 No one wants to wear their period products an hour longer than strictly necessary. 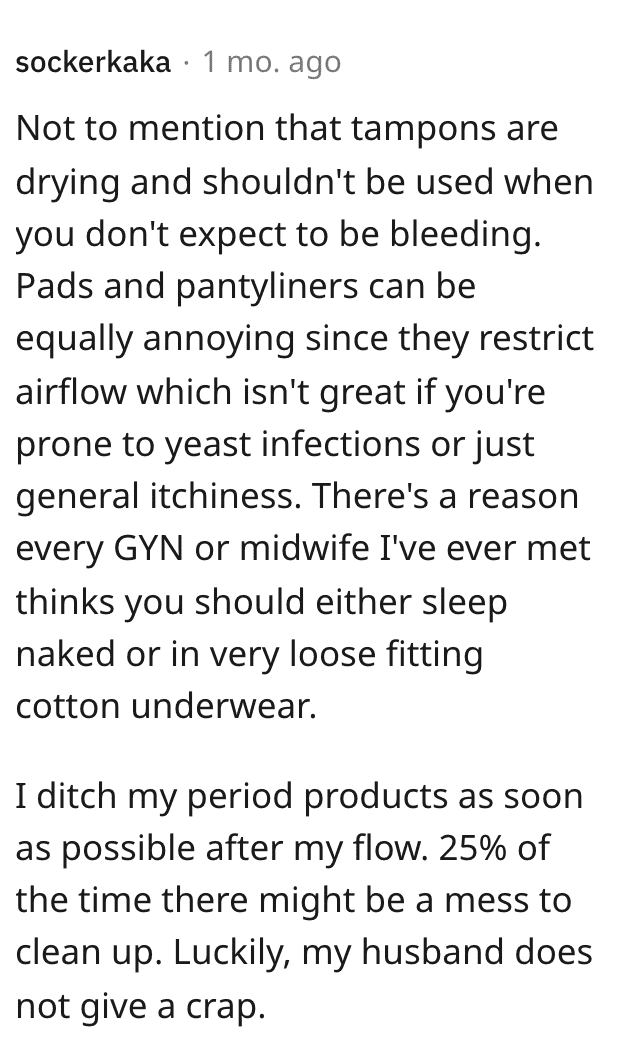 I think it’s clear OP was being completely unreasonable here and Reddit was right to call him out, but I am glad to see him refusing to defend his position later on!

If you were his girlfriend would you be able to forgive and move on? Tell us why or why not in the comments!