What Do You Owe Your Parents After They Threaten To “Make You Homeless?”

While they majority of parents in the world want the best for their kids, some children just get lemons. They end up with parents who just want to boss them around, or who can’t be bothered to worry, or who think their kids were created to serve them and not the other way around.

This OP is in her early twenties but still living at home while she works, interns, and finishes school.

She says that, unlike her younger sister, she also tries to contribute at home before and after her other obligations.

I (23F) live at home. I am in grad school and work part time + intern at an office. I graduate in June and I’ve been applying to jobs as much as I can so I can finally move out.

My sister (20F) also lives at home but is doing school online and doesn’t work.

I try to help with chores around the house as much as possible, although it’s difficult since I leave the house early in the morning and come home late at night.

Recently, she came home and told her dad she would empty the dishwasher after she took a shower and her father laid into her about how she never does anything around the house and is lazy, etc.

Their argument escalated to the point where he threatened to “make her homeless.”

Last week, I came home and there were clean dishes in the dishwasher, I said I’m gonna take a quick shower then empty the dishwasher and my dad went on a rant about how I’m useless and never help around the house and that my sister is always the one doing everything.

I explained that I do help and that just because they haven’t seen me help doesn’t mean that I don’t, he asked me to give him an example and I told him that I took the garbage out the night before.

The conversation escalated to him saying that I should shut up and not argue any longer because he can easily make me homeless if he wanted to.

The next day she quietly packed her things and left, despite having nowhere to go, and blocked her family’s numbers to boot.

In an edit, she says that her mother was there for the confrontation and heard the whole thing. She did not stand up for OP.

I said ok and went upstairs, the next morning while everyone was still asleep I packed my things and left and I’ve been sleeping in my car for a week and taking showers at my gym, later in the day after I left my parents called and my mom texted me asking where I am when I didn’t come home when I was supposed to, I didn’t reply and blocked my entire family’s numbers and social media’s and haven’t spoken to them since.

Her family has been asking her friends, etc, if they know where she is since she left.

They have been calling and texting my friends asking them where I am, I haven’t told any of my friends that I’m sleeping in my car so I got very confused texts from friends asking me what’s going on and why my parents are asking where I am and if I’m safe and ok.

I told my closest friend that I left home and that I’m safe and let her know to tell my parents that I’m fine but I have no desire to speak to them anymore. They’ve been begging my friend to disclose my location and asking her to ask me to allow them to speak to me.

OP finally let a friend tell them she’s ok but she doesn’t want to talk to them, but the friend thinks she’s going too far making them worry.

I went to my friends yesterday and she told me that what I did was awful and that I should speak to them, I told her that they threatened to make me homeless so I left by my own volition but she’s insisting that making them worry about my safety is a horrible thing to do.

But I honestly think I just gave them what they asked for, they wanted to get rid of me so I left. AITA for leaving and refusing to communicate with them?

What does she owe them after how they’ve treated her?

The top comment does not think OP was wrong for being upset, but hopes she can find a safe place to stay until she can get on her feet. 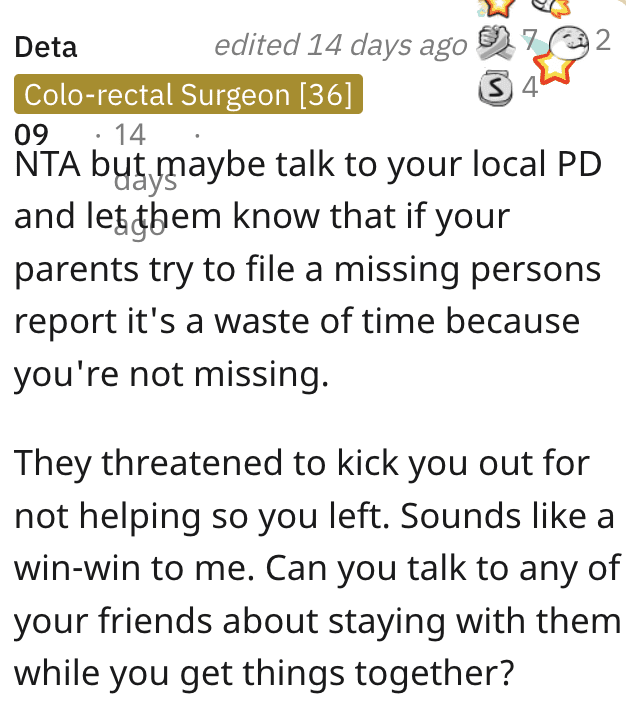 And they think she should make sure the police know she is ok, in case her parents try to file a missing person’s report. 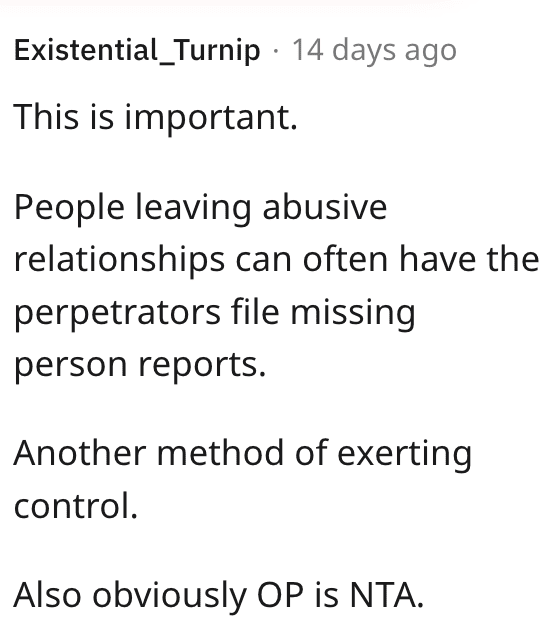 Several people confirmed that being the “invisible worker” is a thing and no one benefits. 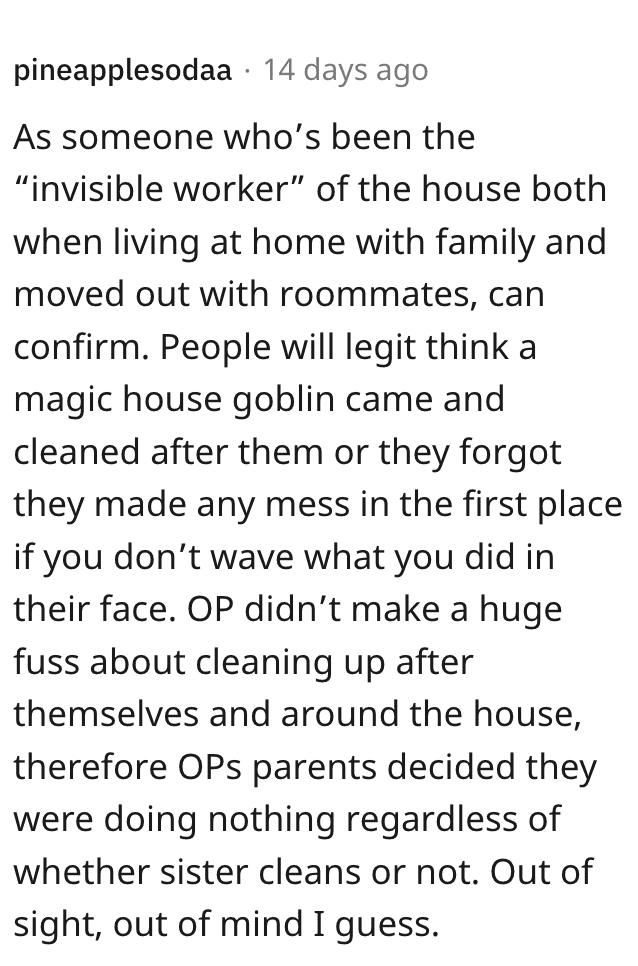 I guess the parents are going to find out now who was actually doing stuff around the house. 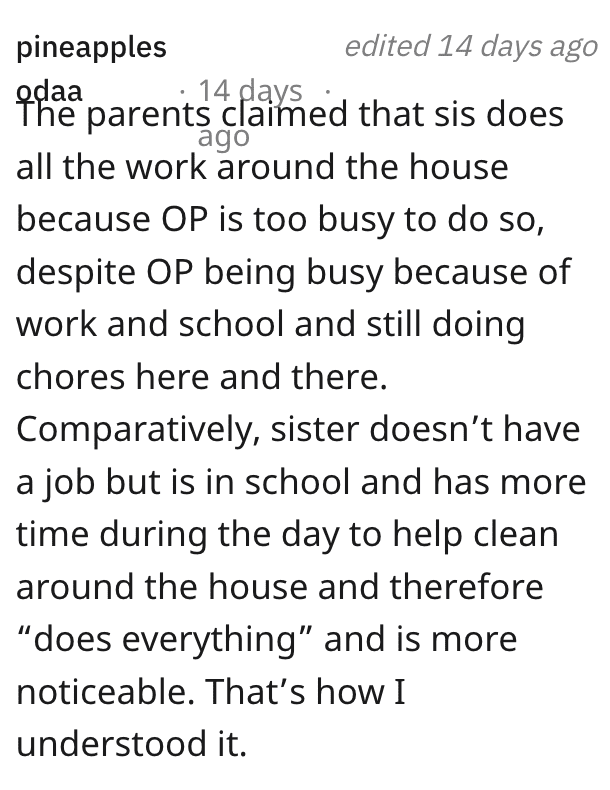 At some point, it’s just time to call your parents’ bluffs when it comes to power. 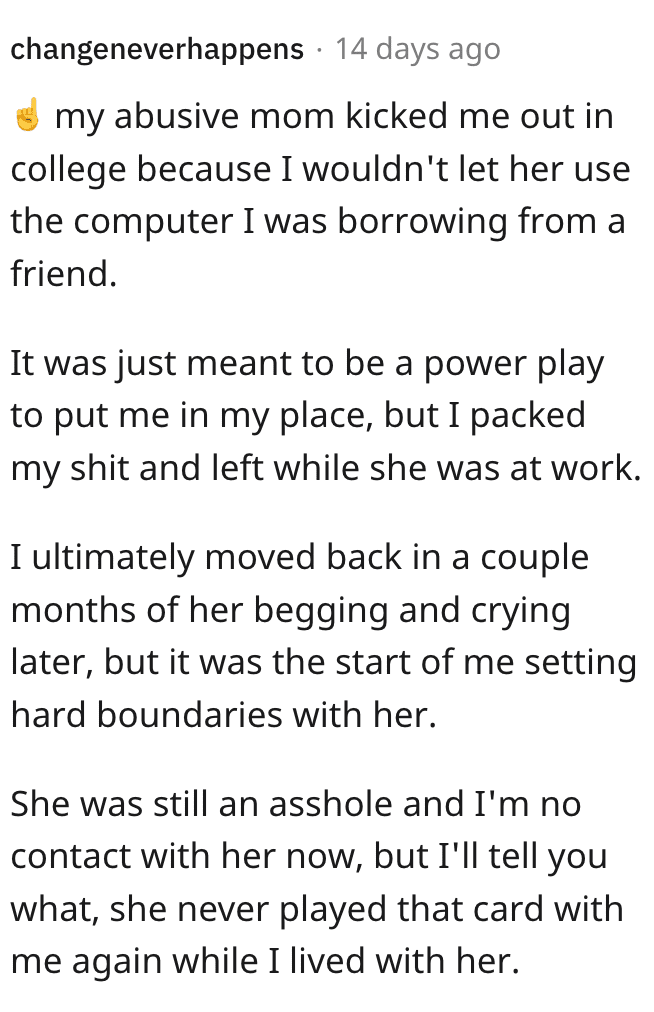 I don’t think she was in the wrong at all, and I would guess this is one of those “straw that broke the camel’s back” moments.

What would you have done if you were her parents? Her friend? Let’s hash it out in the comments!

Read Also:   Woman Asks if She’s Wrong for Snapping at Her Roommate for Making Fun of Her for Working at Hooters