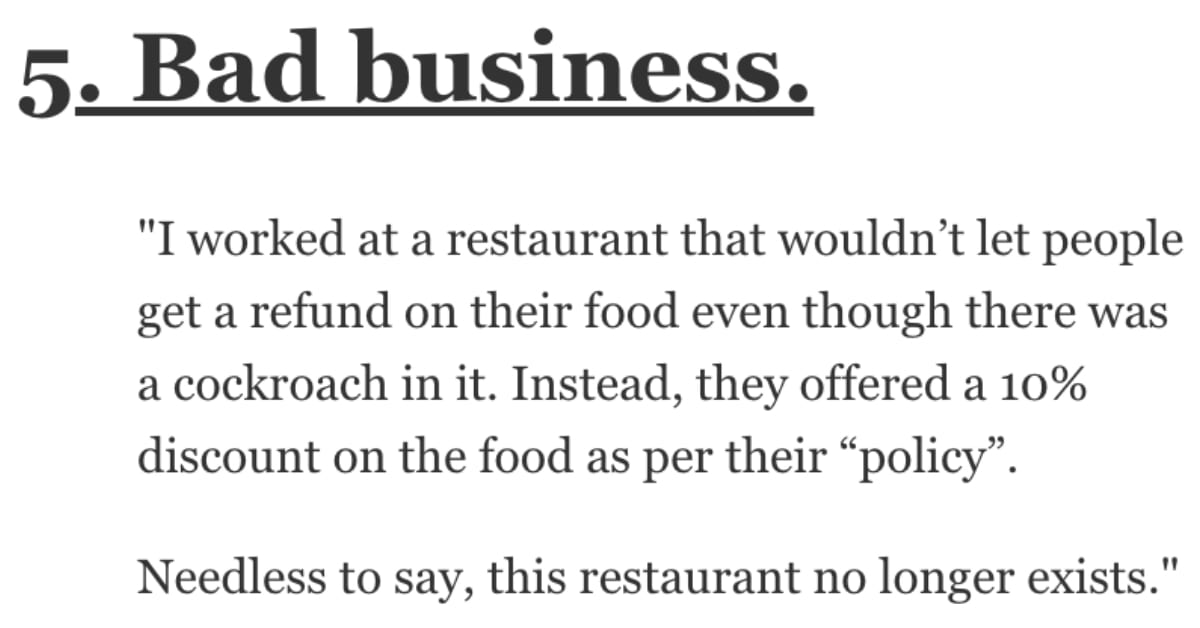 You never really know what’s going on at a business until you work there or a friend or a family member does and they fill you in on all the dirt.

And, once you’ve been around the block a few times and had some different work experiences, you really start to understand the good from the bad…and unfortunately, there are a lot of businesses out there that don’t have their acts together.

What are the worst business practices you’ve ever seen?

Here’s what AskReddit users had to say about that.

Rewarding your existing employees is almost always cheaper than hiring new. Ive had a manager that scoffed at a single 3% raise for someone who had no raise for 5 years. Good luck hiring a new person with that experience and for less money.

There’s a reason why job hopping gets you more money, and it’s not because hiring new is cheaper.”

“Any company/service that allows you to sign up using the internet with minimal verification but requires you to either produce ID, bills, proof of address, or show up in person to cancel that service.

If I can set it up via the internet I should be able to cancel it, too.”

“A veterinarian I once worked for tried to make me re use bloody IV tubing between patients, “just rinse it out” he told me.

He charged the same amount for a pain injection for a 5 lb pet and a 150lb pet, he over worked and underpaid his employees, he was rude to his clients, and tried to make staff carry out tasks they were not qualified/educated to do.

He would cut corners in any possible way.”

“I used to serve at a restaurant where we wore pagers that buzzed us when a table’s food was ready. Good idea right?

Well the owners had the policy that you had to immediately go pick up the food no matter what, and that included if you were in the middle of taking another table’s order. They said that people “understand” and are cool with it. Of course they weren’t though. Every time I stopped taking a table’s order and went and got the food, they were totally p*ssed off.

I could not believe the owners did not understand why literally no other restaurant on the planet does it that way.”

“I worked at a restaurant that wouldn’t let people get a refund on their food even though there was a cockroach in it.

Instead, they offered a 10% discount on the food as per their “policy”.

Needless to say, this restaurant no longer exists.”

“A store put a massive discount on weighted blankets. They were originally selling for $150, but were now being offered for $39.99.

The catch? You’d need to sign up for free as a VIP member online. Ummmm ok no harm done.

So i signed up and bought the blanket. And so did thousands of other people.

The store cancelled our orders and refunded our money, claiming that they weren’t able to fulfill our orders. And now they had a couple thousand more new names on their mailing list.

And sure enough marketing emails came pouring through. I unsubscribed once but still had emails coming in.

“Trying to get employees to quit.

My managers at a fast food place didn’t want to keep long term employees due to having to pay them more and firing them means unemployment costs.

Quitting in the US means no unemployment and not having to give raises.

“I worked for a big car rental company in the returns department.

They would push us to find and charge customers for any new damage on their cars by awarding bonuses on top of our monthly salary. We were given mirrors to look for scratches under the cars where costumers would normally not have checked before they rented the car, often leading to heated arguments over if it really was their fault or not.

The company did not care either way and made us charge their insurance deposit if they refused to pay. The daily verbal abuse and stress from being sandwiched between my managers and angry customers has definitely left a mark on my mental health and I will probably never work in the traveling industry again.”

“Major banks sorting your transactions when you have a low balance in such a way to maximize overdraft fees.

Honestly, overdraft fees in general. Many banks will charge you an overdraft and deny the transaction. Because apparently it costs them $35 to deny a transaction.”

“I worked as a food service manager for a large hotel chain, let’s call it “Chariot Hotels”. The general hotel manager wouldn’t approve repairs/replacements of equipment unless we were expecting an inspection in the next 2-3 months.

The immediate bad effect of this was a lot of negative reviews. Our icemaker broke, so we had to send employees to the other side of the hotel to get ice from an ice machine to make iced coffee, smoothies, etc. resulting in extremely long wait times for iced drinks.

We also lost money because a lot of the cold food, like chicken salad, can be made in bulk and stored for a few days in the fridge. Unfortunately, half of our fridges didn’t cool properly, so we had to make a lot of foods fresh every day and discard a lot of food.

Lastly, I quit when I got tired of requesting repairs that never happened. 2 weeks later, they got an early inspection and an exceptionally bad score for a chain (they passed, but just barely). The general manager blamed it on the former food service manager (me), and I believe she still manages the hotel to this day.”

“In the town I grew up there was this guy who ran a music store. The kind that sells musical instruments.

He would sell brand new stuff at 50-60% discount, hell a friend of mine haggled a brand new Gibson guitar off the shelf for maybe 75% off. I bought several cymbals off him dirt cheap. (For you drummers out there, Sabian AA, not cr*p)

Turns out, his family was filthy rich (old money) and running the store was his “hobby”, you know just something to do. He would sit there, smoke, discuss which Zappa record was the best, and basically give stuff away.

It was awesome. And terrible business.”

“I worked in a small boutique hotel with a fine dining restaurant and a gastro pub connected.

You had to juggle service and reception all the time. Our hotel director felt it would be appropriate for us to wear a headset to answer calls for the hotel while serving to make sure we didn’t lose out on any room sales, stating that the customer would be understand as long as we excused ourselves.

“And here we have some locally sourced braised lamb, served with vegetables grown at a farm located just north… Excuse me for a minute while I answer this call”.”

Have you ever seen any really bad business practices that made you cringe?

Talk to us in the comments and tell us about them.