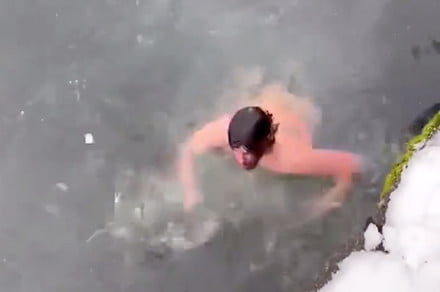 Roman Czarnomski is one brave guy. Or just plain crazy.

The resident of British Columbia earlier this week jumped into a freezing cold harbor in Victoria on the west coast of Canada to rescue his beloved iPhone XS.

A video (below) of the precarious salvage effort begins with Czarnomski stripped down to his underpants as he ponders whether he really is going to submerge himself in ice-cold water for the sake of a handset.

With snow falling in what look to be frigid temperatures, one of the onlookers tries to persuade Czarnomski to abandon his rescue effort, telling him, “Your phone’s ruined, don’t jump in there, it’s a bad idea … it’s not worth it.”

But the guy recording the video, evidently keen for Czarnomski to bring his iPhone to the surface (or simply desperate to catch some wacky footage), eggs him on, calling out, “It’s not that deep,” before adding, “It’s not that far, you can swim.”

Next, we see Czarnomski carefully lowering himself down the harbor wall to dip a foot into the water to test the temperature, though it could only have been either “frickin’ cold” or “really frickin’ cold.” Probably the latter.

Having made his decision, the daring phone rescuer launches himself into the water, briefly disappearing beneath the surface before emerging with his Apple-made device, and possibly double pneumonia.

Victoria man jumps into the freezing inner harbour to rescue his iPhone. ???? Wondering if it worked afterwards?

Incredibly, despite the phone being submerged for several hours, it still worked.

Apple says the iPhone XS, which launched in 2018 before being discontinued a year later, is designed to withstand up to two meters of water for up to 30 minutes, though Czarnomski’s handset remained in the icy depths for far longer.

“I had a feeling it would work,” he told local news site Victoria Buzz, adding, “I wasn’t really sure though until it buzzed in my pocket when the guy who took the videos sent them to me after I got out.”

Czarnomski explained that the camera had slipped out of his hand when he was taking photos of the harbor, but at the time the water was too deep to retrieve it. So he decided to return a few hours later at low tide to get it back.

While swimming in extremely cold temperatures is an enjoyable pastime for some people, it can present health risks for others, so do think twice about doing what Czarnomski did if you’re ever faced with a similar dilemma.