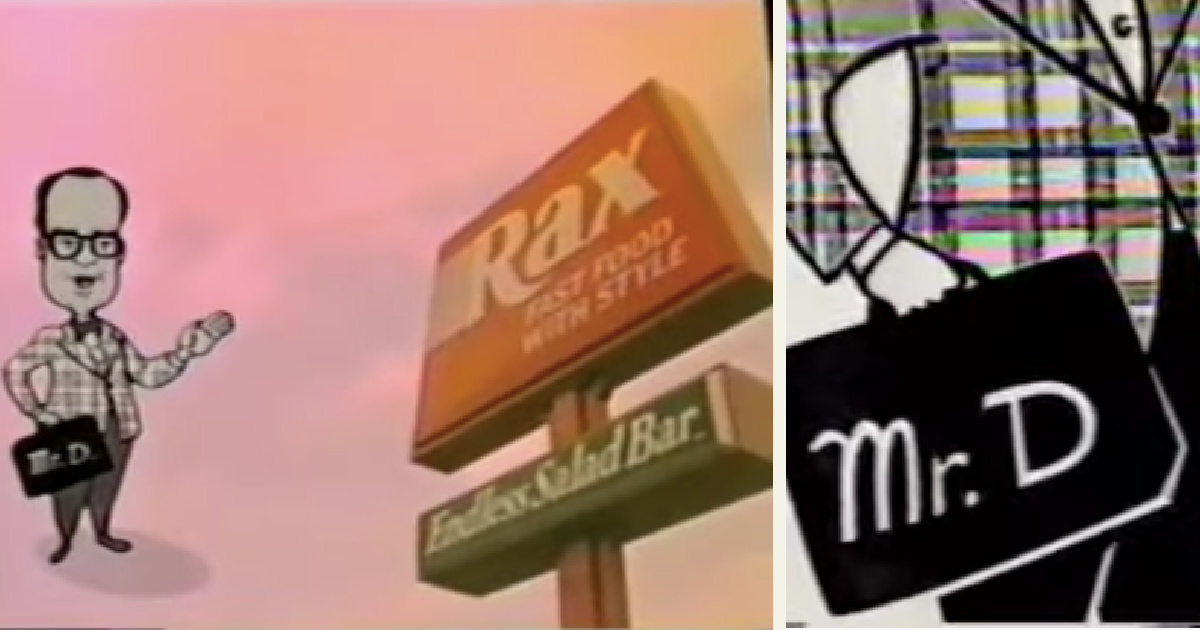 You know how some things are so bizarre and just hard to explain that they fall right out of our collective memory as soon as they’re gone?

That’s what happened with Rax Roast Beef, I think, and even if their short-lived spokesperson Mr. Delicious didn’t cause their demise directly, there’s no way to argue that he did not help matters whatsoever.

Hank and John Green, the Vlogbrothers, brought up the fascinating memories they have of eating at Rax Roast Beef with their families growing up. Apparently, a Rax was like “fast food for grownups,” because it was nicer than a regular fast food place.

The video states that the restaurant had a lot of issues with identifying a brand and sticking with it, and they were constantly adding new and random items to the menus, and trying out features like a salad bar and a pasta bar in order to try to discover a previously unplumbed niche market.

None of it really worked, and by the early 1990s, the business was in trouble.

Intro a new spokesperson – or really, the parody of a spokesperson – called Mr. Delicious. He was unhappy, he shared way too much about his life, and honestly, wasn’t that excited about the food when he finally got around to it.

Here’s what Hank Green said about the who debacle in their video:

So all of this is paired with the worst or possibly best tag line in all of fast-food history. Rax. You can eat here.

But they’re also trying to do a thing. They’re trying to identify with a core audience. But who is that audience? It’s fast food for grown-ups.

Misogynist, unfunny, alcoholic, sad grown-ups who gamble too much and go to psychotherapy?

There was an odd promotional video, even, trying to convince people – or maybe just the franchise owners – that Mr. Delicious was a hilarious parody and audiences (and guests) were going to get on board any day now.

Two short years later, the company filed bankruptcy, but if you listen to John Green’s reply, it will clearly live on in the memories and hearts of those kids who spent their fancy family dinners in their weird greenhouse-slash-patios.

Well, there you have it! I grew up in the Midwest and don’t really remember eating at a Rax, but apparently it was an experience you didn’t forget.

Did you eat at Rax? Do you remember Mr. Delicious? We want to hear all about what you recall, so tell us about it in the comments!