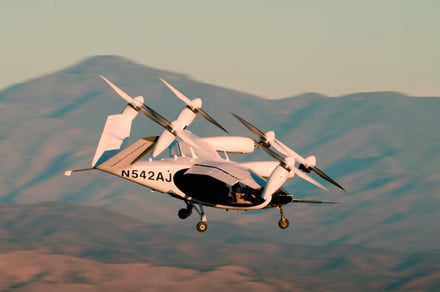 With some serious financial backing from the likes of Toyota and Intel, Joby Aviation appears to really be going places with its all-electric vertical takeoff and landing aircraft, or eVTOL for short.

California-based Joby has been working on its flying machine for the last 10 years and wants to use it to launch an air taxi service.

It has already conducted more than 1,000 test flights of the machine, though has largely kept the vehicle under wraps. Until now, that is.

This week Joby finally released footage (top) showing its zero-emissions aircraft in flight, zipping through the sky at speeds of up to 200 mph (322 kph). The unveiling comes as the company announced a merger with New York City-based Reinvent Technology Partners. The move will see Joby receive a further $1.6 billion in funding as the combined company prepares to list on the New York Stock Exchange.

The current design of the aircraft, which should be close to the finished product, uses six sets of tilting rotors that switch it between lift flight and wing-borne flight. The vehicle is “quiet in take-off and near-silent when flying overhead,” according to Joby, and can carry a pilot and four passengers on trips of up to 150 miles.

Joby’s air taxi service is set to offer flights within and between cities, trips between urban areas and quieter spots, and flight services for rural communities that currently lack air transportation links. The company offers an example on its website, showing a trip from Los Angeles International Airport to Newport Beach about 40 miles to the south. Driving would take around 1 hour and 15 minutes, while Joby’s eVTOL aircraft would arrive a whole hour earlier — with passengers treated to some great views along the way.

“While traveling is central to human existence, it’s often painfully inefficient and is only getting worse,” Paul Sciarra, executive chairman of Joby Aviation, said this week. “By rethinking how air travel is delivered, we can open up new ways of moving around congested cities and under-served rural communities, helping to tackle congestion and climate change at the same time.”

Sciarra added: “Aerial ridesharing will drive a generational shift in how we travel this century, just as the railroad and the jet aircraft did in previous centuries.”

Joby is currently engaged in a multi-year testing program with the Federal Aviation Administration to certify its vehicle for commercial operations that it hopes to launch in 2024.

And Joby isn’t the only company vying for a piece of the eVTOL air taxi market. Check out Digital Trends’ recently updated article showing some of the weird and wonderful designs currently under development from competitors around the world.