Was This Woman Wrong To Embarrass Her Husband In Front Of Their Kids?

There are some instances where it seems easy to judge another person until you’ve walked in their shoes. When it comes to being a full-time caregiver to a once-independent family member, I think this is definitely the case – because we have no idea how hard it is until we’ve done it ourselves.

OP in this case is caring for a husband who has had sudden and debilitating medical issues. One of the side effects is that he’s unable to hold his bladder and wets the bed.

Despite her being the only one to change the sheets on a daily basis, he refuses to wear an adult diaper while they wait for medication to kick in.

My husband was staying at the hospital for some health issues. After he got out he started wetting the bed every few nights, we talked to the doctor about it and they gave us meds but they take time so they suggested that my husband use adult diapers temporarily.

He said no, and since he’s too sick to do anything then I’m the one having to clean up every time.

After yet another instance of her having to clean up after him and him not listening to her pleas for a diaper, she lost her cool.

I grew tired of it. He just kept wetting the bed and not even considering diapers at this point. Yesterday morning was my final straw…I saw that he’d wet the bed again and I just kind of went off.

I kept talking but it’s like he wasn’t hearing me at all because he just kept staring at the wall.

When their kids (11 and 13) came in asking what was going on she told them the truth, though probably not at all in a kind way.

The kids heard the fuss and came in asking what was going on. I showed them the state the bed and sheets were in and said “see your dad keeps wetting the bed and throws a tantrum when asked to wear a diaper”.

They stared and my husband looked shocked. He had them leave the room then said I shouldn’t have done that.

In my defense I wanted to defend myself because I thought it was unfair when the kids accuse me of yelling at their dad “for no reason”.

Her husband was upset and crying, saying that she humiliated him and that she wasn’t being very understanding of all the issues he’s currently facing.

When she told her sister about the situation later, her sister agreed with her husband that she could have handled things much better.

He said I humiliated him infront of his kids and made him feel terrible. I told him he can be less embarrassed and feel less terrible when he stops wetting the bed like he was a child.

He started crying saying he’s struggling with his health and said that I was being cruel and descendant towards him now, I’m “trying” to turn the kids against him as well as shame him in front of them.

My sister visited and when I vented to her about it she said she understood but I was still in the wrong for getting kids involved. I’m feeing conflicted on whether I did the right thing maybe to get him to understand how this has been affecting me as well.

So is Reddit willing to judge this woman? Or are they going to give her a break considering all that she’s been through? Let’s find out!

The top comment is from a kind nurse who reminds the other commenters that this woman is going through a lot, too. 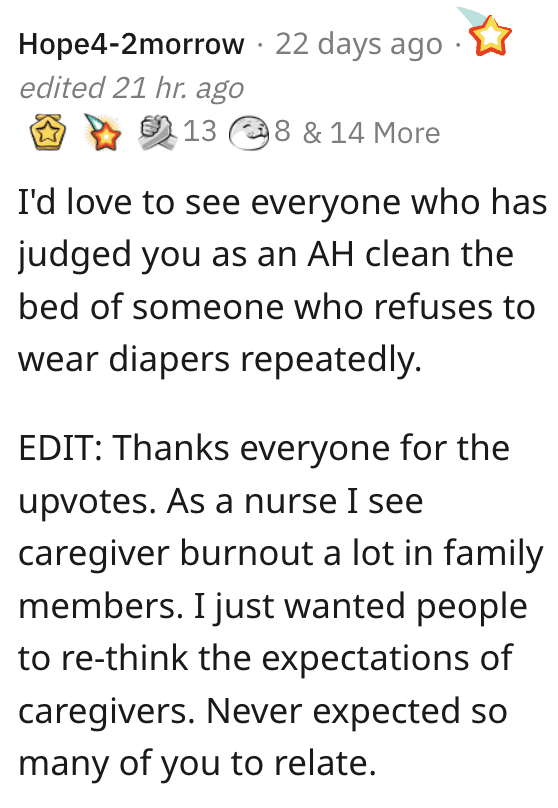 If it’s financially possible, it’s always best to hire someone else to care for a loved one. 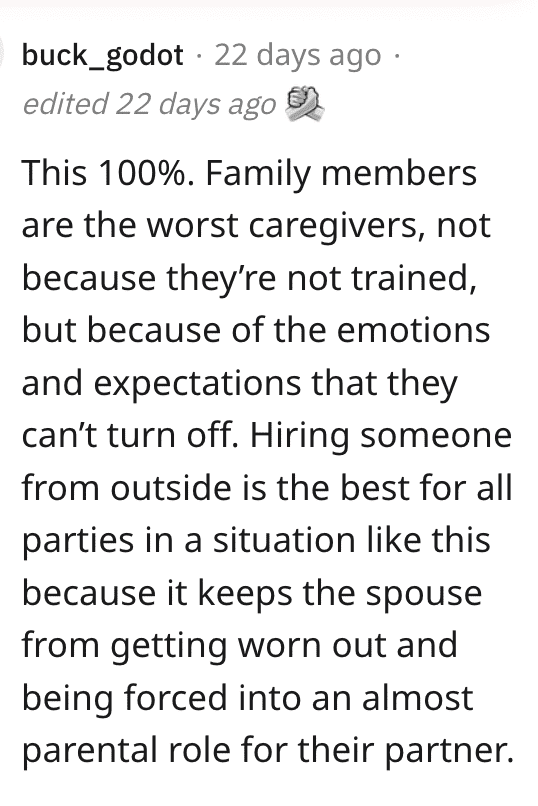 It takes a toll on the kindest of souls. 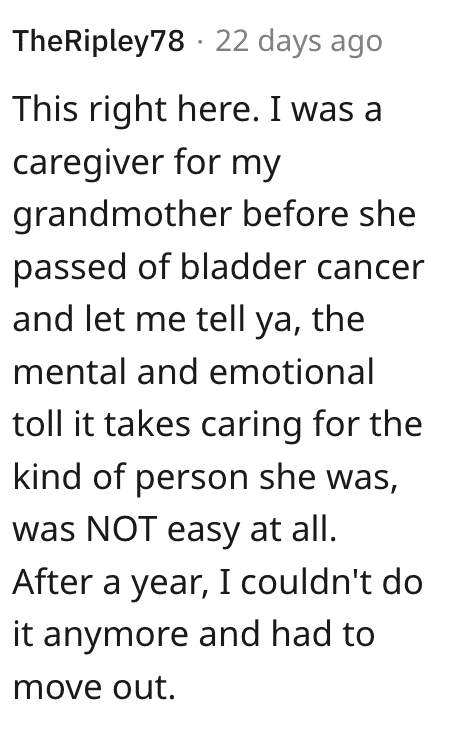 She didn’t handle it the best, but he’s not being considerate of her, either. 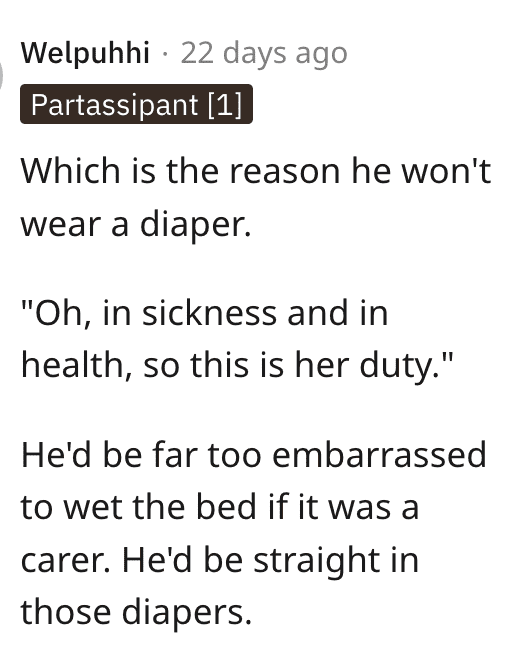 Chances are she’s judging him way more for not wearing the diapers, when it comes right down to it.

Y’all, I can’t with people like this. You’ve got to be kind to those caring for you, even if you’re feeling depressed and terrible yourself. Full stop.

Even if she was wrong to involve their kids, I still feel for her, don’t you? If not, please leave your point of view in the comments!