Was This Woman Wrong For Leaving Her Husband at a Clinic and Driving Off?

Let’s be honest – there are a lot of relationship posts on Reddit that are concerning, to say the least. I’ve read plenty of them where the advice in the comments was to run away screaming.

This post, though, has everyone legitimately concerned for the lives and well-being of both OP and her baby.

It begins with the dubious information that OP’s husband left his previous wife after learning that she cannot have children.

Then things start to get worse, as she says she’s now pregnant and since finding out he’s acted completely differently, with rules and anxiety that are exhausting her.

I f26 have been together with my husband Austin m35 for 3 years. He was married before me but divorced his ex wife because she couldn’t have kids.

Ever since I became pregnant he did a complete 180°, he became obsessed by constantly watching my every move and breathing down my neck. He even hung photos of the sonogram!.

He also came up with a list of what I’m allowed and not allowed to do, like not driving, not eating certain foods, not working but I stood my ground and continued working, also not wear high heels or watch certain shows or see family unless precautions were taken. It has been exhausting for me already but he has made it 10x worse.

Recently he woke her up and insisted they go to the doctor because he had a “feeling” something was wrong. He called into work for her when she refused and then dragged her along to the doctor.

Yesterday, he woke me up at 7am and said we had to go to the doctor, I asked why since I wasn’t feeling sick and he said he just had a hunch and I had to skip work and go with him to the appointment just to make sure because he felt something was wrong.

I said no but he went and called my boss and took the day off for me. I was just speechless but decided to just go to get it over with. We got there after he kept scolding me for things i did the night before that might have caused a problem- but literally there was no problem.

Once there he berated the doctor, forcing her to check again and again that everything was fine. Eventually OP just left, leaving him to find his own way home.

I got into the car and went home immediately. He kept calling then came home and started yelling at me for leaving in the middle of my “examination” and then leaving him at the clinic.

She blew up at him (finally), stating that his behavior was impacting her happiness and mental health and that he was acting bizarrely for no reason.

He’s acting as if she’s the one who owes him an apology for “hurting his feelings,” so now she’s wondering whether or not this is all fine and she’s overreacting.

I blew up and told him I couldn’t stand his obsession anymore and that his paranoia made me feel paranoid and is beginning to affect my social life, mental and physical health and my livelihood.

He looked at me then said that I hurt him with what I said and that he was just trying to make sure the baby was fine and I was being aggressive and irresponsible towards him AND the baby this entire time, he said I was acting like a neglectful mother when the baby isn’t even here yet then left and turned his phone off.

This morning he’s acting distant and is expecting some sort of an apology for what I did.

AITA am I overreacting?

The top comment points out that not only is his behavior not normal, it’s likely to escalate once the baby is born. 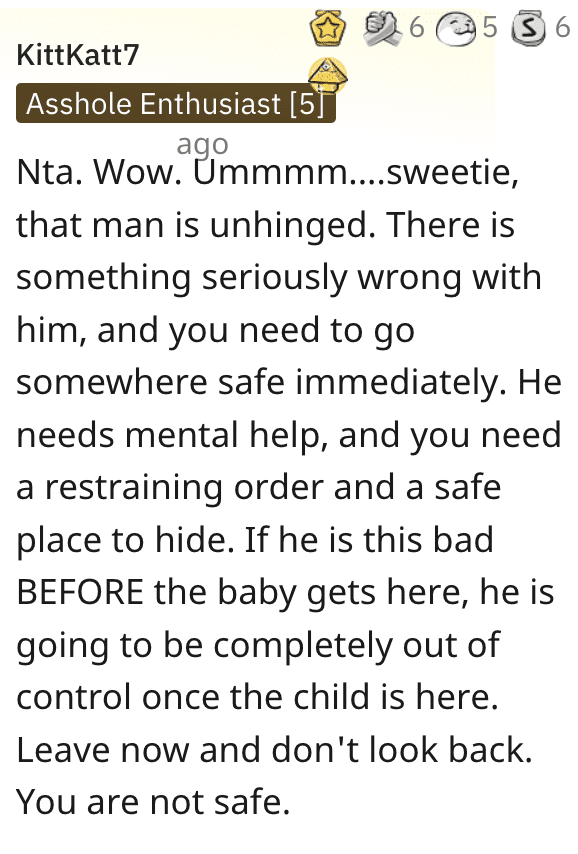 This comment says clearly there are no good options here, and probably no good outcomes, either. 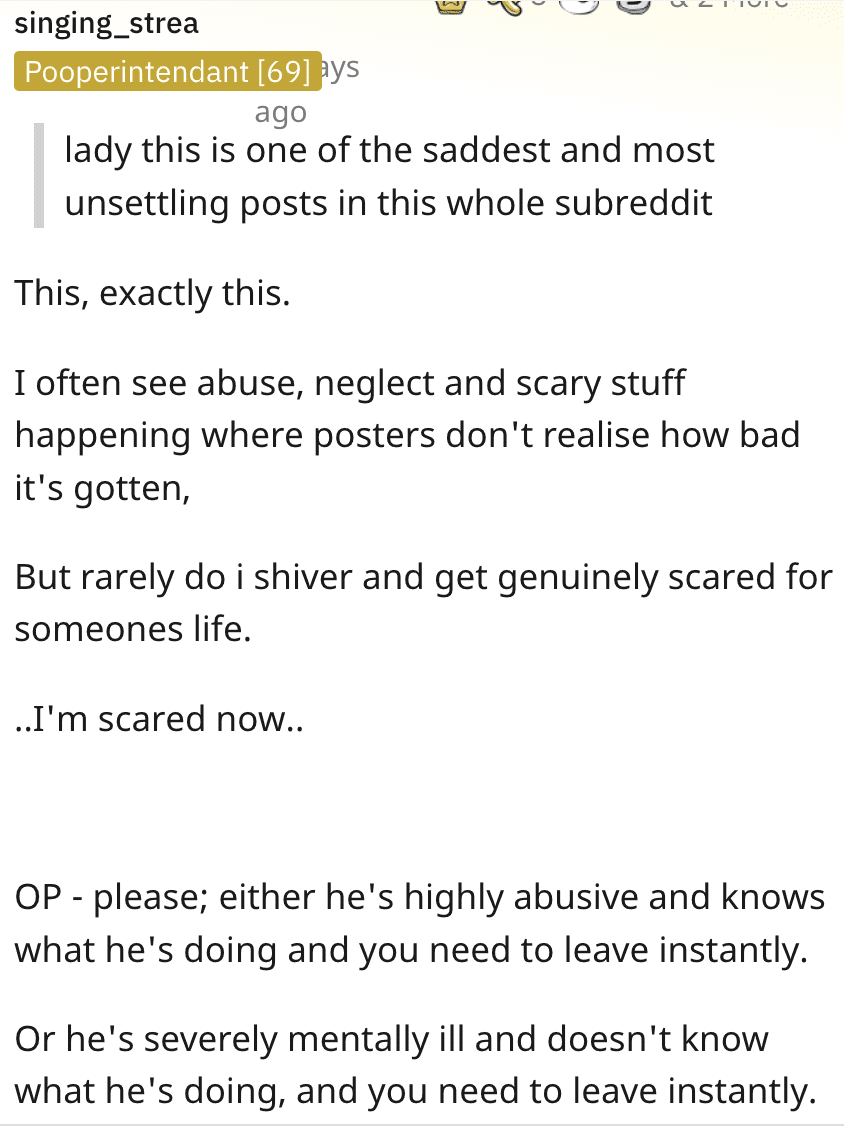 He might not even know what he’s doing, but I don’t know whether that makes it better or worse. 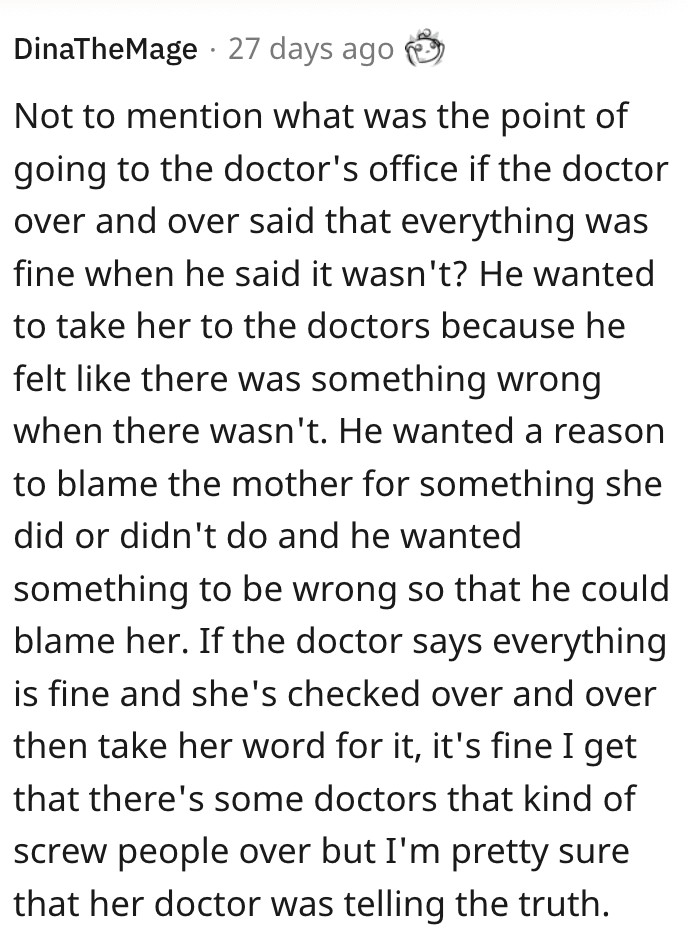 His concern is obviously for the baby and not for his wife. 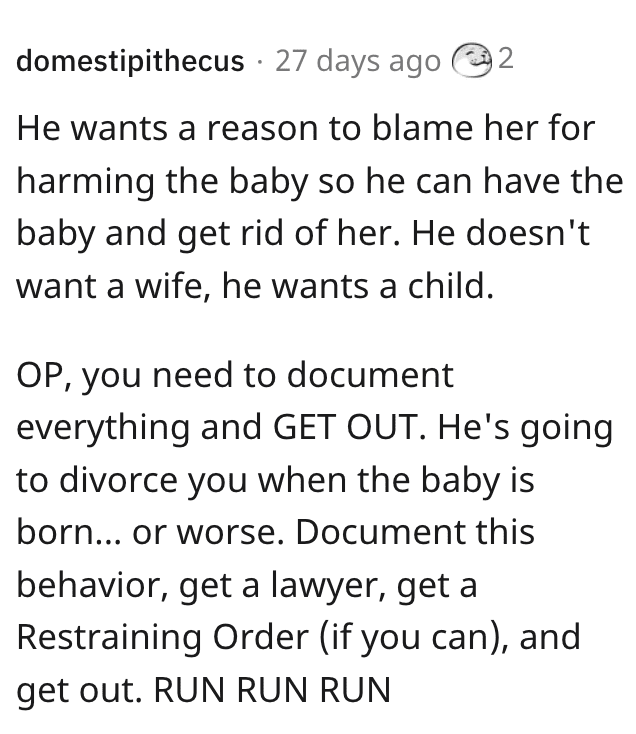 Everyone is really hoping for a happy update at some point. 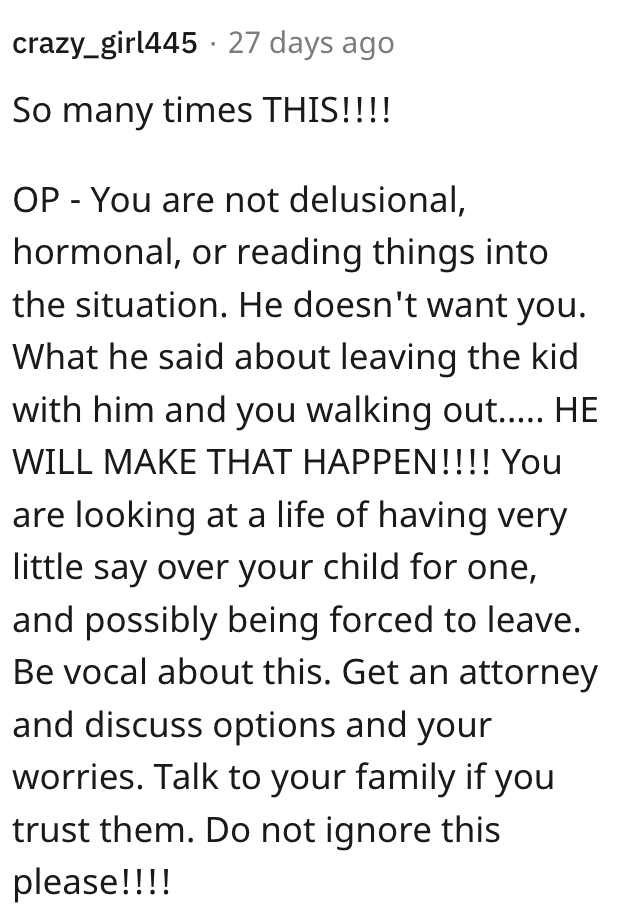 I hope this woman took all of this feedback seriously and is making plans to get away and stay safe.

Isn’t it crazy how hard it can be to see what’s normal and what’s not when you’re too close? How would you have advised this woman?

Let’s freak out together in the comments!