No matter how good your relationship is with your spouse and their family, everyone struggles sometimes fitting into to a group that was established before you came along.

Your ways are not their ways, of course, but in the best of cases, everyone is kind and inclusive and finds ways to get along.

In not the best of cases, things happen like this woman experienced – even though she’s asked to bring desserts to family gatherings (she’s a semi-professional baker), no one ever ate them because there was already a “better” baker in the family.

Not only that, but they make snide comments about how “overly decorated” cakes are there to mask sub-par flavors (which is OP’s specialty).

This isn’t necessarily my proudest moment but I am tired of being the outcast.

My (32f) husband “Pete” (34m) comes from a family where the women are all bakers. I am a baker myself and I used to sell out of my house under my states cottage laws but stopped because I like it just being a hobby.

His SIL “Kay” (39) is the one who is “known” for her cupcakes and cake pops. When I first met everyone years ago, it was the first thing I learned. Everyone talked about everything she made. Even when Pete mentioned how good my stuff was, everyone would say that Kay sells hers and they’re popular so they must be better. Whenever I bring treats, they are often left untouched because “they are not Kay’s”. Yes, I’ve been told that. They ask me to bring something every get together and never touch it.

To be clear, Kay is mainly a baker whereas I bake and specialize in professionally decorated cakes. Kay says that overly decorated cakes are compensating for their bad taste and Pete’s family agrees.

So, at a recent family BBQ, the “family baker” posted pictures of the cake pops she was bringing the night before…so OP made the exact same ones, same decorations and flavor, and set them right next to the “better” ones.

Everyone ate hers and commented on how they were the best ever, looked better, etc – and when OP revealed what she’d done, no one was thrilled.

We had a BBQ Monday for Memorial Day and everyone made their treats. Kay decided to bring cake pops. She posted them on her Instagram the night before. So, and I know this immature, I made the exact same ones she did, same flavor and design.

We got there and everyone asked where my treats were. I said they’re in car and I’ll get them in a minute. So I waited for everyone to be outside then I brought mine in and put them next to Kay’s.

After we eat, I notice the family eating my cake pops and not Kay’s. She didn’t notice at first and then asked if they weren’t feeling cake pops. They said they just ate them and they were the best she ever made and asked what she did different. MIL even said they looked so much better in person than in the picture.

Kay was confused and said hers were still on the table. That’s when I said, “Oh, I brought those. Glad you enjoyed them.”

Her husband said he hadn’t had one yet (lies, he ate two) and everyone else just said “yeah, they were okay.” Kay didn’t say anything the rest of the night.

They think OP was mean to pull that kind of trick but she and her husband think it’s high time people stop snubbing dessert they haven’t even tried.

I mean, she calls it like she sees it. 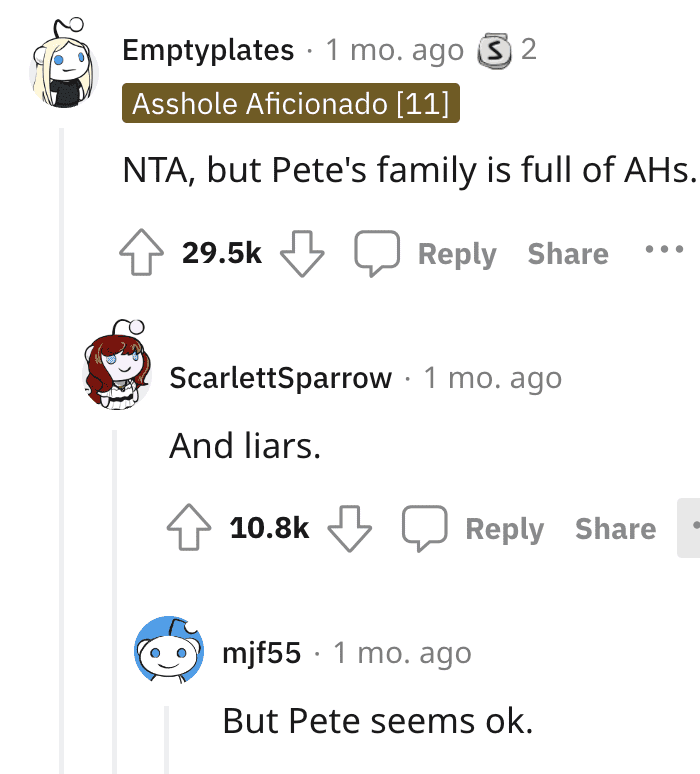 This sounds about right. 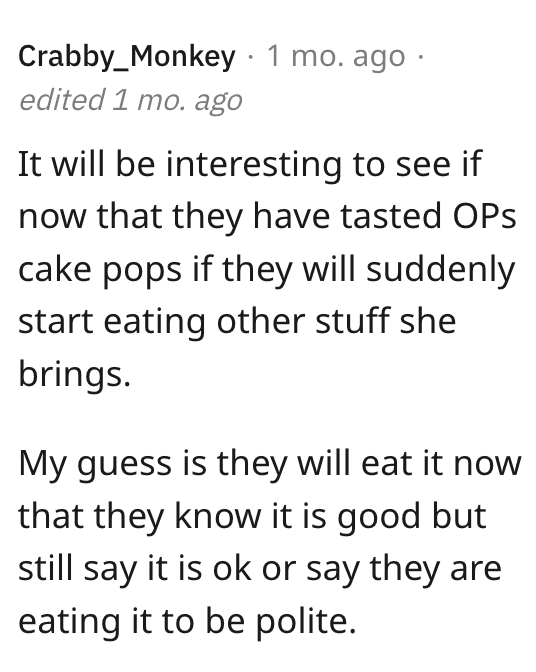 So maybe it wasn’t petty enough… 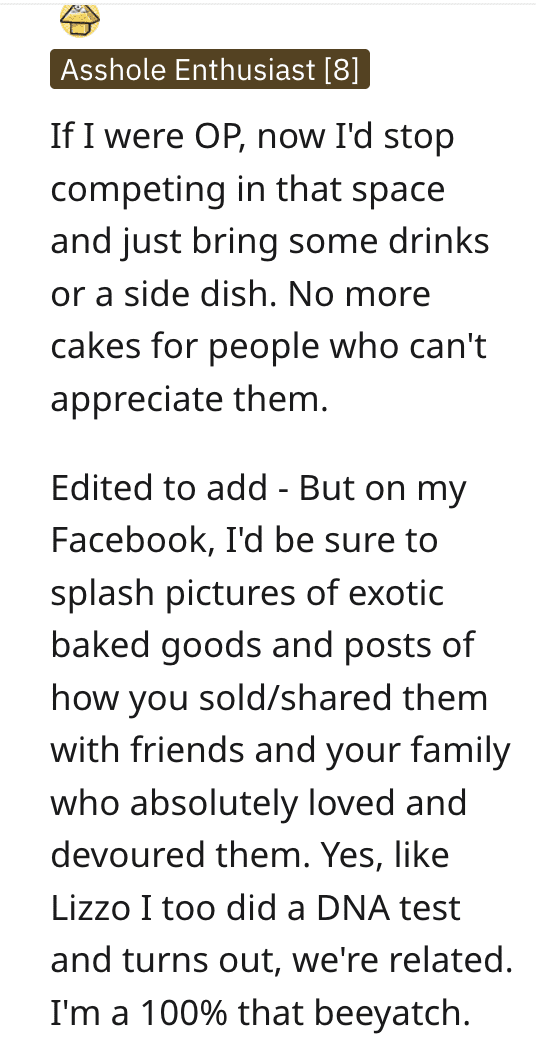 Everyone thinks she should stop trying now. I mean, what’s the point? 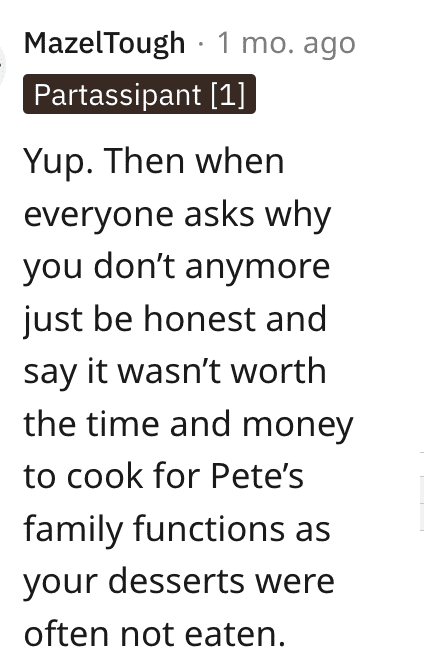 When you put it that way it’s kind of sad. 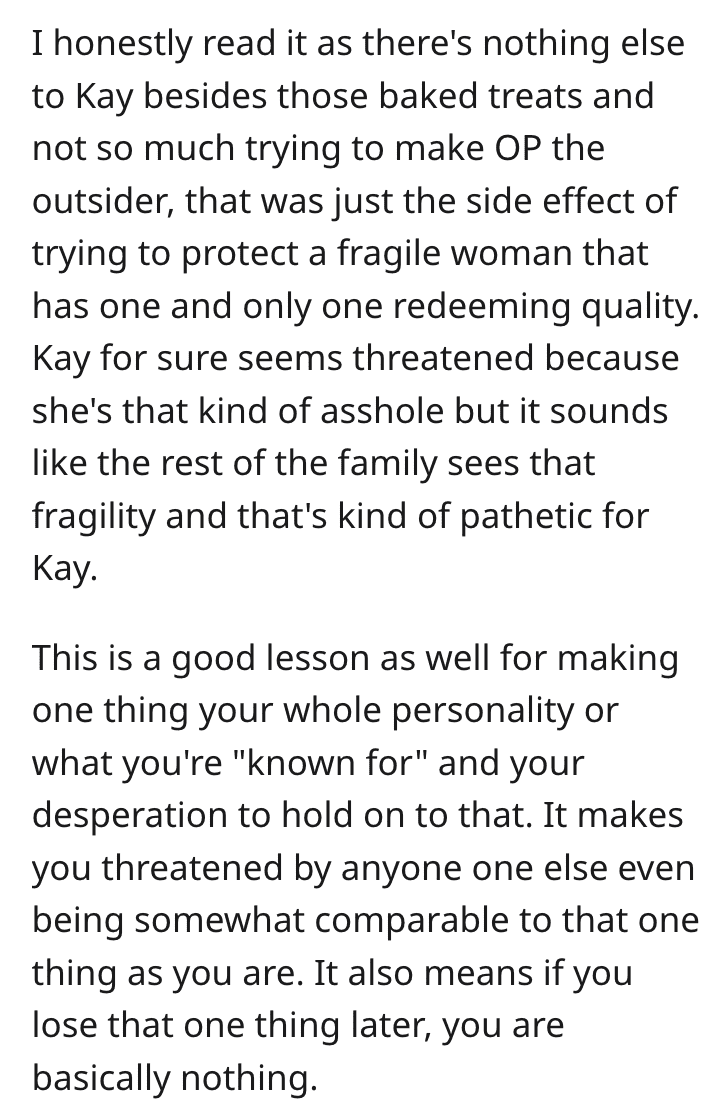 First of all, who doesn’t eat cake when it’s there?

Second of all, why are people so rude?

How would you have judged this OP? Let us know in the comments!