Was This Teenage Girl Wrong To Involve Her Grandfather In “Family” Matters?

There’s no doubt in anyone’s mind that being a teenager isn’t easy. That said, there are certain types of parents that make it harder than it has to be, whether that’s what they’re meaning to do or not.

This girl lives with her mother and stepfather (her father is not in the picture), the latter of whom is very strict and thinks his house should be run like the military.

OP tries her best to make herself scarce, because that’s easiest for everyone, choosing instead to spend time hanging out with and helping her maternal grandparents instead.

My step-father is overly strict with me, mainly because I’m not his daughter, but also because I don’t let him give me crap, he’s an ex-military and has this stupid mindset that discipline is everything and we must listed to him at all times, we have to call him sir.

I try not to be here as much as I can, I have a job, an extracurricular and I help my grandparents (my mom’s parents) at their house with their housework and their pets, my grandparents are really sweet with me, I love them very much and my grandad defends me from my step-father when he crosses the line (FYI, no, I can’t move with them.).

Things at home have gotten worse since OP began dating her boyfriend 8 months previous. She’s brought him around but her stepfather was rude to him and basically forbade him from returning.

I have a boyfriend (17M) called Mike, we’ve been dating for 8 months now and I introduced him to my grandparents first, he’s a good guy, kind, smart and funny, I decided to introduce him to my mom 3 months ago at dinner, my step-father behaved horribly.

He kept asking Mike a bunch of questions and then tried to pick a fight, my bf is bigger than my step-father but he decided to leave before things went bad.

Ever since then, he has forbid me to bring him home because he didn’t like him, giving excuses like ”he knows guys like him”, ”he was rude”, etc. I did respect his rule until this last instance that caused this whole problem.

Recently, her boyfriend came over looking for comfort after a confrontation with his own father, and when OP’s stepfather found him there he kicked him out and removed her door (even though it wasn’t closed).

Mike discussed with his father yesterday and he came to my home asking for comfort, my mom was here, and since she saw how distraught he was she allowed him to come to my room and talk, I left my door open.

In between this, Mike cried and hugged me, resting his head in my chest and that’s how my step-father found us, there was a lot of yelling, I left with Mike for 15 minutes and when I came back, my door was gone.

He also confronted his stepdaughter, calling her names when she stood up for herself. She called her grandparents upset about the whole thing.

Her grandfather arrived and took her side, removing her parents’ door and installing it on her frame instead, then taking her out for dinner.

My step-father said that that’s what I deserved for disrespecting his rule, my mom did tell him that she gave Mike a pass, but my step-father was having none of if, he berate me for a few minutes until he called me a bitch.

When he let me go to my room, I called my grandad and he came here ASAP, long story short, he took my parents door and installed it in my room, then he took me out to eat so we could talk better.

Her mother apologized for her husband’s behavior but still thinks OP was wrong for involving other people in their “family” business.

When I came back again, my step-father said that me and my grandad humiliate him in front of his children, my step-brother called me an AH and while my mother apologized with me for what my step-father did, she said I was wrong because family problems must stay here.

What does Reddit say about that load? Let’s find out!

The top comment points out that the grandfather is more family than the stepfather, if they want to get right down to it. 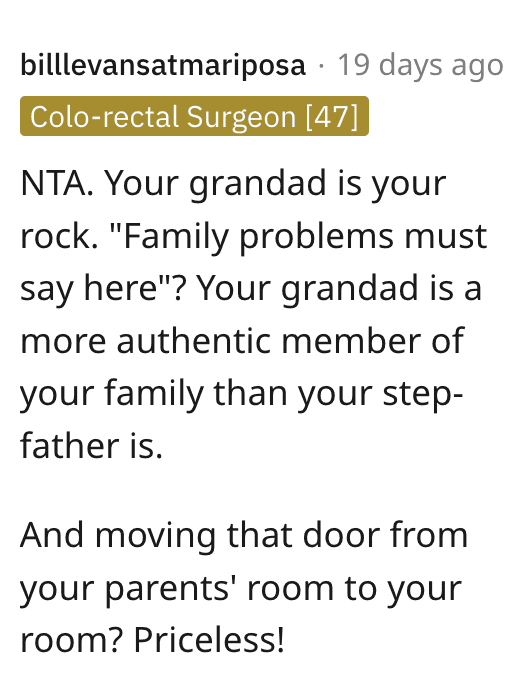 Other commenters hope that OP will stand up to her mother and demand to be treated better going forward.

Everyone agrees also that the stepfather is not giving the respect that he’s requesting in return. 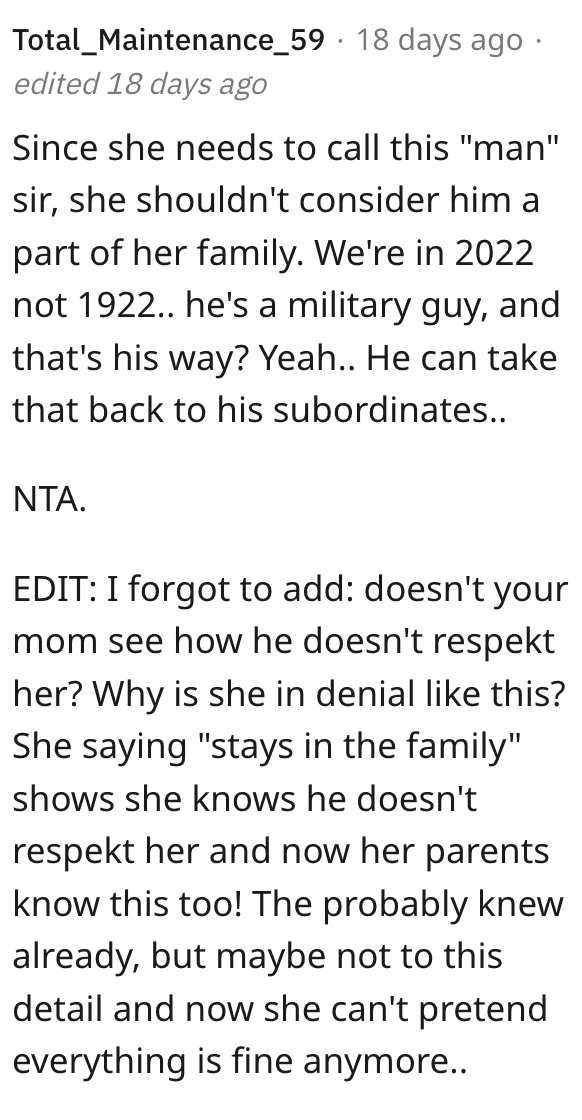 This person warns OP to be careful in forcing her mom to make a choice, because it might just break her heart.

Great grandpas are worth their weight in gold. 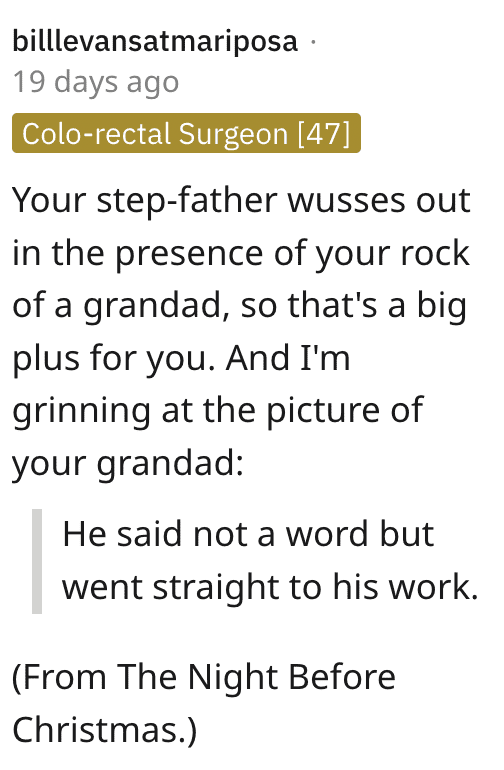 My heart goes out to this girl, who will likely find herself on her own. after she moves out and her grandparents pass away. If her mom hasn’t stood up for her before now, she’s probably never going to.

What advice would you give her? Let’s talk about it in the comments!