Was This Mother Wrong To Take Her Son’s Savings To Pay For Repairs To His Stepbrother’s Car?

There are no shortage of posts about parenting on the subreddit Am I The A$$hole. We’re always second-guessing ourselves, but also wanting to do the best by our kids that we can.

This mother tried talking her son down over his jealousy about his stepbrother’s new car. Her son was upset that his mother and stepfather didn’t buy him a car, too.

My stepson (19) got a new car from his bio mom. she and her family are well off and unlike me, they could afford to buy a car.

I’m happy for my stepson but my son (17) isn’t. in fact he complains about how unfair it is for my husband to let his ex gift their son a car but not him.

It’s unreasonable I know! but teenage years are mostly hard and it’s even harder to expect the kids to be reasonable.

He insisted they share the car. She told him that it belongs to his stepbrother and he couldn’t expect to use it at all without permission.

He said that either they share the car or the car goes.

My son wanted to take part in driving the car as a “compromise” or else we would have to get rid of it. I sat him down to explain to him that the car is his step brother’s property, and he shouldn’t be expecting to drive it unless he’s given permission.

He was having none of it and kept giving us ultimatums saying he either share the car with his stepbrother or the car goes.

The kid followed through on his threat, destroying his stepbrother’s car – and he wasn’t sorry about it at all.

When my husband confronted him, my son went and done so much damage to the car, he threw paint on it, ruined the lights and damaged the front of it completely. My stepson had a breakdown when he saw it in the morning and husband was beyond livid after seeing the footage from our driveway cam and seeing my son damaging the car.

My husband confronted my son later and all my son did was laugh and give him the middle finger.

In an attempt to fix things, OP took her son’s camp savings to pay for the repairs. Her son accused her of stealing (among other things) and blamed his mother and stepfather for his bad behavior.

I went to take all of his camp savings for this summer to pay for the damages and gave them to my husband. My son found out and went batshit on everyone in the house.

He accused me of stealing then trying to please my husband for “sex” then told his stepbrother that he warned him and so he shouldn’t be blamed.

He also said it was my fault for not getting him a car or getting my husband to get him a car in the first place to avoid favoritism and conflict.

Now he’s refusing to come out of his room and refusing to eat, so his mother is worried she’s done something wrong.

He’s been spending majority of his time in his room refusing to come out or eat anything. I’m worried about him not eating because he did this once and ended up in the hospital for low bp.

Take a deep breath and then read through the advice that Reddit had to give.

The top comment suggests she ask how her son would like it if his stepbrother pressed charges instead. 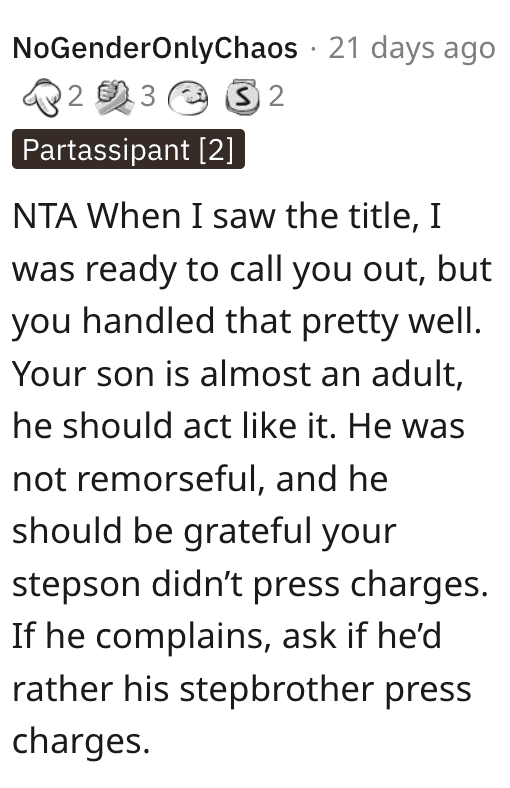 After all, you break it, you bought it. 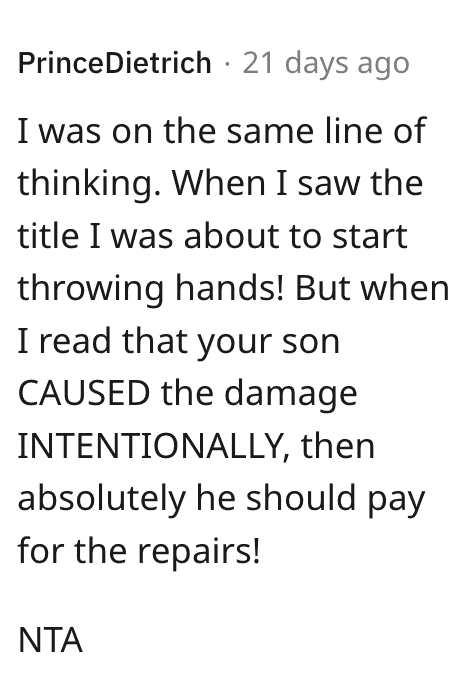 Actions have consequences and it sounds as if it’s high time this kid learned that lesson, hard or not. 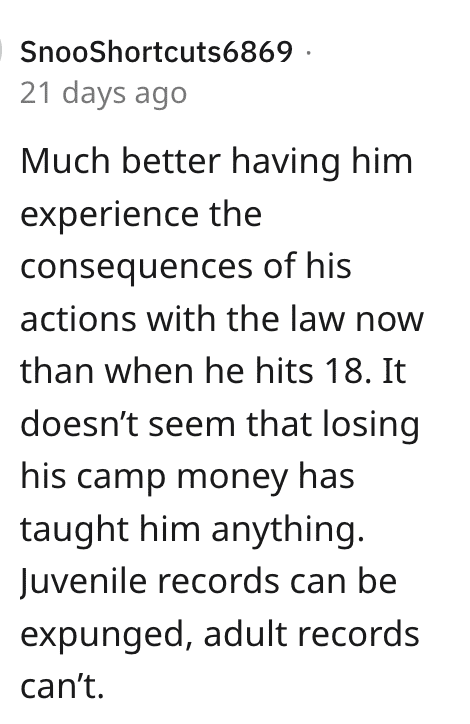 Best to nip it in the bud now.

The bottom line for most commenters is that if anything, she hasn’t been tough enough. 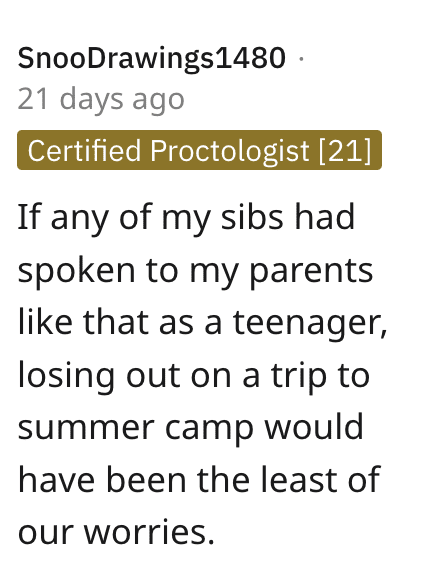 This kid makes me angry, and I really hope his mother finds a way to correct this behavior before more people get hurt.

How would you have handled this? Would you have let the police step in? Tell us why or why not in the comments!