Was She Wrong When She Said She Didn’t Want Her Husband to Adopt Her Son? People Responded.

A woman asked the readers on Reddit’s “Am I the A**hole?” page if they think she acted like a jerk when she told her husband she doesn’t want him to adopt her son from a previous relationship.

Read on to see what exactly happened.

“I’m (26F) married to my husband of two years, Devon (30M), I have a son named Levi (5M) from a previous relationship. Devon has known him his whole life, Levi’s father and I were together until he went missing before our son was born.

Devon loves Levi with all of his heart, and Levi loves him too, I know it. Levi looks a lot like his father and while I’ll always love him, I’ve moved on from the relationship. He was a big adventurer and I often talk about him with Levi, I show him photos and he visits his dad’s family pretty frequently, he knows he’s ”daddy” while Devon is ”papa” or ”Devon” depending on his mood, either way, he’s his father figure. We do receive money from my ex’s side, his father takes care of some of Levi’s expenses, but that’s not the issue here.

Three days ago, Devon asked me about adopting Levi, he wants to give him his surname and become his legal parent. I said no. He was devastated by this, but I don’t think I’m ready or that it’s even fair. We can legally do it but I don’t wanna.

I said he could hyphenate Levi’s last name with his, but he wants to fully adopt him, he said my ex’s parents can still be a part of his life, he doesn’t have any problem but I said he could ask when Levi was older and that if he says yes, then I’m okay with it, but in the meantime my answer is no.

He’s been distant ever since and now and I might be wondering if I was an AH for crushing his hopes, I called my sister to ask her opinion and she said I was because this is the only father Levi has known all of his life and I’m taking something big from him.”

Now it’s time to see what Reddit users said about this.

This reader said this woman is NTA and her son should make a decision about this when he’s older. 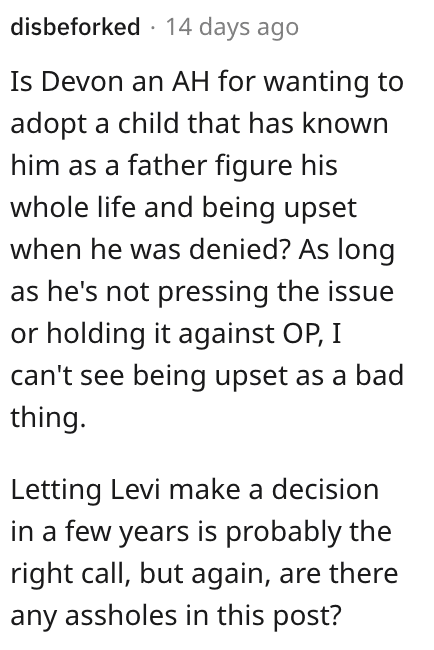 Another Reddit user said there were no a**holes here and that they need to talk this thing out.