#VanLife: How a Sprinter van was turned into a mobile office

In 2022, you don’t need us to tell you that the styles in which we all work have fundamentally changed. And while it is by no means a modern concept to trade in a brick-and-mortar home for a van-based vagabond lifestyle, today’s flexible workforce has more opportunities to live on the road than ever. And that’s exactly where the #VanLife movement comes in.

But how do you set up a roving office to keep you comfortable, focused — and most importantly – connected during a 40-hour workweek? We got in touch with Austin Shoecraft and Melanie Hershman (known as The Nomadic Devs), a pair of road-based software developers who took the turmoil of 2020’s pandemic and turned it into a plan to hit the open road. They spent the better part of the last year purchasing, outfitting, and customizing a Mercedes Sprinter van to optimize it for a road-based office. After a few months of breaking it in, it’s safe to say that their work/life balance is unparalleled. 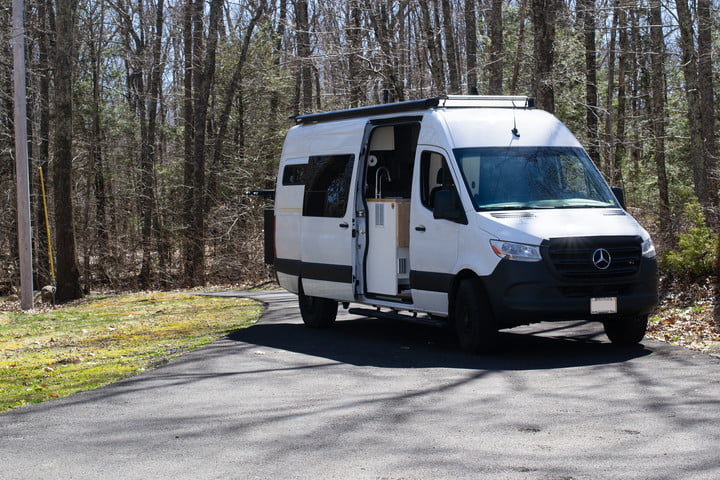 The van: How to choose the ideal canvas

Everyone’s heard of an RV — the outdoor enthusiast’s go-to when choosing a home for the road. But while these RVs can be great for families and temporary trips, they aren’t outfitted for the long haul. “In our research, we found that RVs were built for luxury, not practicality,” says Hershman, “They aren’t necessarily great for people who want to live and work inside of them permanently, rather than seasonally.”

There are actually a ton of choices for vehicles you can convert into a mobile home/office. Some van lifers (which, we’re told is the endearing term these nomads prefer) opt for the classic stylings of a pop-top conversion van or a VW Minibus, while others aim for the uncommon by converting an old horse trailer to tow around the country.

The Nomadic Devs went all-in and purchased a brand-new diesel-powered Mercedes Sprinter van. “We chose the 20-foot Sprinter van, because it’s the perfect balance of internal space and external versatility,” says Shoecraft. “We wanted to be able to spread out in a queen-sized bed in the back, but we also wanted to be able to street park in Austin, TX.”  As soon as the dealer handed them the keys, they turned around and handed those keys to a custom fabricator — in this case, Interstate Vans out of Massachusetts — to build their road home into a full-on mini-apartment and office.

The living quarters: Living large in a small space

A short walk through the interior (and believe us, it is a short walk) shows just how clever these builders and designers can be. There’s a water-purification system feeding a surprisingly deep sink next to a fully powered induction cooktop in the kitchenette. There is more than 30 cubic feet of cargo storage in their van’s “garage,” which happens to sit right between the wheel wells under their Queen-sized bed. The small shower is outfitted with the Nebia by Moen showerhead to deliver a high-end experience, but it’s designed in a small space to conserve heat and energy — no sketchy camping showers here.

“Though we hit our heads a lot, we really love the natural wood paneling on the inside,” says Hershman. “It makes it feel like we’re in a living space, not the inside of a van.” The Devs made sure that there is a reasonably sized dining area with a stowaway table that can accommodate cozy evening meals and heavier work sessions as needed. The kitchenette even features a flip-up butcher block counter extension that Hershman swears offers more counter space than in their first Brooklyn apartment.

The tech: The next frontier of ‘open concept’ office space

Many van lifers you’ll meet are choosing that lifestyle because they love travel, and they’re willing to make ends meet by posting YouTube videos or taking odd jobs along the way. The Nomadic Devs, on the other hand, are taking full-on six-figure careers with them for the ride.

“I actually recently pivoted careers from a largely office-based role in the arts to software development, in large part, because it gave me remote work flexibility,” says Hershman. “We’ve always loved the idea of being ‘nomadic’ because travel is a huge passion point for us, and our new rolling digs give us the opportunity to work, explore, and test out new cities for our eventual ‘forever home.’”

Bringing a full-time career on the road means that these particular van lifers have an additional need: They need their tiny moving home to double as a tiny moving office. A big part of that is the connectivity and internet infrastructure (which we’ll get to in the next section), but that also means they need space to work. They need safe storage for their high-end laptops. They even need the ability to pop out an extra monitor for heavy work sessions.

One big component is a spacious office chair. To make the most out of the van, the Devs had the idea to let the front-cabin bucket seats double as their office chairs. But how do you transform these into workstations? They opted to install these seats on a free swivel, allowing them to turn the chairs around, face them backward, and set up shop for a full day of coding. Of course, for the ultimate workspace, they hop out of the van into a camping chair and take a meeting while taking in some national park views.

“Just because we’re working from a van, doesn’t mean that everyone at our respective companies are also doing that,” says Shoecraft. “In order to continue successfully working in these circumstances, we need to be just as accessible on chat, video calls, and email as we would be working from a home office.” And to the Nomadic Devs, that means what they call “redundant connectivity systems.”

At the center of this is their cell signal booster: The WeBoost Reach RV. This handy set of antennas takes the existing cell phone tower signals that sit nearly everywhere in the U.S., and amplifies them to minimize frustrating dead spots. WeBoost provides a remarkably simple installation process, with comparatively small receivers and antennas – just one black external antenna and one small repeater on the inside of the van. In their tests, the Devs confirmed that the WeBoost typically doubled their data download speeds, and in many cases more than quadrupled their upload speeds.

But don’t take their word for it. Here’s a picture of the speeds with the WeBoost off:

And here’s one with it activated:

This increased cell service is quite possibly the most important part of their van build because it ensures that even in dead spots in the middle of the Great Plains, they’ll likely have at least a couple of bars to make a quick call or fire off some time-sensitive messages.

The redundant part of their setup comes from additional infrastructure. They’ve also installed an Insty Connect cell-based modem that they’ve purchased a dedicated SIM card for and that helps to power the Wi-Fi connections on their workstations. They’ve rounded this out further with a separate T-Mobile ho tspot as a backup. So, the WeBoost helps their cell phones to catch service from Verizon, while the Insty and the T-Mobile hot spot act as additional options with completely separate service plans. That’s three options from multiple networks.

The most recent addition to the van’s communications arsenal is the currently pre-order-only Starlink low-latency satellite internet system developed by SpaceX. The Devs were able to secure this antenna because they’ll be traveling through areas notoriously low on internet and cell signal, which are target geographies for SpaceX’s beta Starlink map.

“In practice, this whole setup has delivered on everything we need,” says Hershman. “Whether we’re in a state park somewhere or parked in a driveway we found on Vanly, we’ve always been able to take video calls smoothly, even if we’re both in meetings at the same time.”

While the interior is set up for comfort and productivity, the exterior of the van is perfectly optimized for utility. The back of the van features a fully lockable safe box for storing supplies and protecting important equipment, as well as a bike rack and custom-installed pullup bar for recreation and exercise. On the side of the van, you’ll see a sturdy ladder taking you up to the roof where the WeBoost’s main antenna is mounted for optimal signal alongside a multiple solar panel array to charge the internal battery storage of the van.

“We added 500 watts of solar panels to the roof to supplement our power capacity,” says Shoecraft. “This really helps to support the arsenal of energy-using equipment we have inside the van like our induction cooktop, our UV water filtration system, and our connectivity systems like the WeBoost and the Insty Connect.”

The Devs have even lifted and bolstered the all-terrain capabilities of the van with Agile off-road suspension cells, Fox Factory Tune shocks, and massive 16-inch Black Rhino wheels. This all allows them to get to the remote places where their cell signal boosters are even necessary.

While these particular van lifers aren’t doing this solely for the #content, you can follow along on the Nomadic Devs’ journey on Instagram — and they’ll be launching a YouTube channel soon. And if you want your own tips on taking your life on the road — you don’t have to be an influencer to do it — just reach out and say hi!

“Living in a van can have its ups and downs, but that’s true for everyone. Our ups and downs are just a little different,” says Hershman. Shoecraft adds: “We’ve met a ton of great people and seen some amazing places, and we’ve only been at it for a couple of months.”