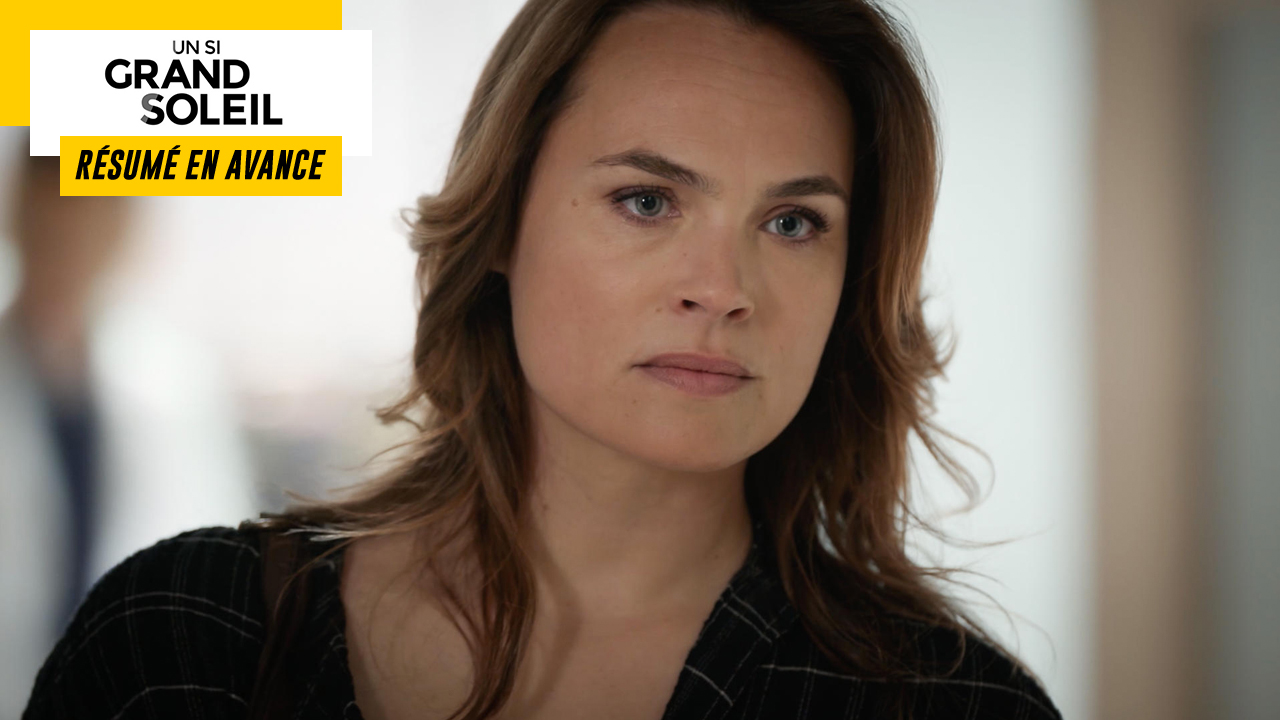 In the next episode of “Un Si Grand Soleil”…While the death of Myriam upsets her loved ones, the police are investigating a new drug case.

THE DEATH OF MYRIAM SHOCKS HIS LOVED ONES

Seeing Myriam’s lifeless body, Berthier is in shock. When the deceased’s cell phone starts ringing, it picks up. It is in tears that he then announces to Marc that a terrible accident has occurred and that the woman he loves is dead.

For his part, Louis returns to his mother. As it is late, the teenager makes him believe that he was with Kira and that he did not see the time passing.

During this time, the emergency services and the police were dispatched to L. Cosmétiques. Yann then informs Manu that the victim is a woman in her forties who allegedly impaled herself on a piece of wood. According to him, it is certainly a burglary gone wrong. Upon discovering that the deceased is none other than Myriam, Captain Léoni is shaken. Indeed, if she is Alex’s cousin and a very good friend of Claire, Myriam is also one of Manu’s conquests.

In turn, Marc arrives at the scene of the tragedy and collapses at the sight of the body of his companion.

In the early morning, Alex receives a visit from Manu who has the difficult task of announcing the death of his cousin. Devastated by this sad news, the policeman however goes to the police station with the firm intention of working on the investigation. Only Commissioner Becker immediately removes him from the file because he is far too emotionally involved. Alex then loses his temper then insults everyone before Manu manages to calm him down.

A few steps away, Léonor is preparing a laundry when she smells an odor on Louis’ belongings. At the same time, Marc arrives at her house upset and tells her what happened. Also, Marc doesn’t want to go home because it’s too hard to be surrounded by Myriam’s things. For his part, Louis hears him but remains very silent.

At the same time, Alex goes to Les Sauvages and recounts, not without emotion, the death of Myriam in Davia. In tears, the latter falls into the arms of her brother.

Not far from there, Claire is spending time with her family when Manu calls her to tell her that her best friend has died. The nurse, who is in shock, finds it hard to believe.

For her part, Kira receives a message from Louis asking her to join him urgently. Once she joins him at the tennis club after dark, Louis explains to her that he’s in trouble because he’s done something horrible.

Teddy, a 19-year-old young man was shot and killed in a housing estate. Élise and Akim are in charge of the investigation but the inhabitants of the district, who fear to attract the wrath of the dealers in the area, refuse to talk.

The task therefore promises to be complicated, especially since Teddy had no criminal record and no drugs were found in his blood. If everyone agrees that the teenager was a nice boy, Commissioner Becker thinks he led a double life. That’s why he asks Elise and Akim to get their informers to talk.

For his part, Antonin begins his internship at the Lemeur-Grasset firm and goes around the best accompanied by Margot.

Charles begins his first day at Christophe’s veterinary practice. When a client arrives before the office closes, Charles offers to see her in her place. After accepting, Christophe gives him some instructions before joining Achille to play basketball.