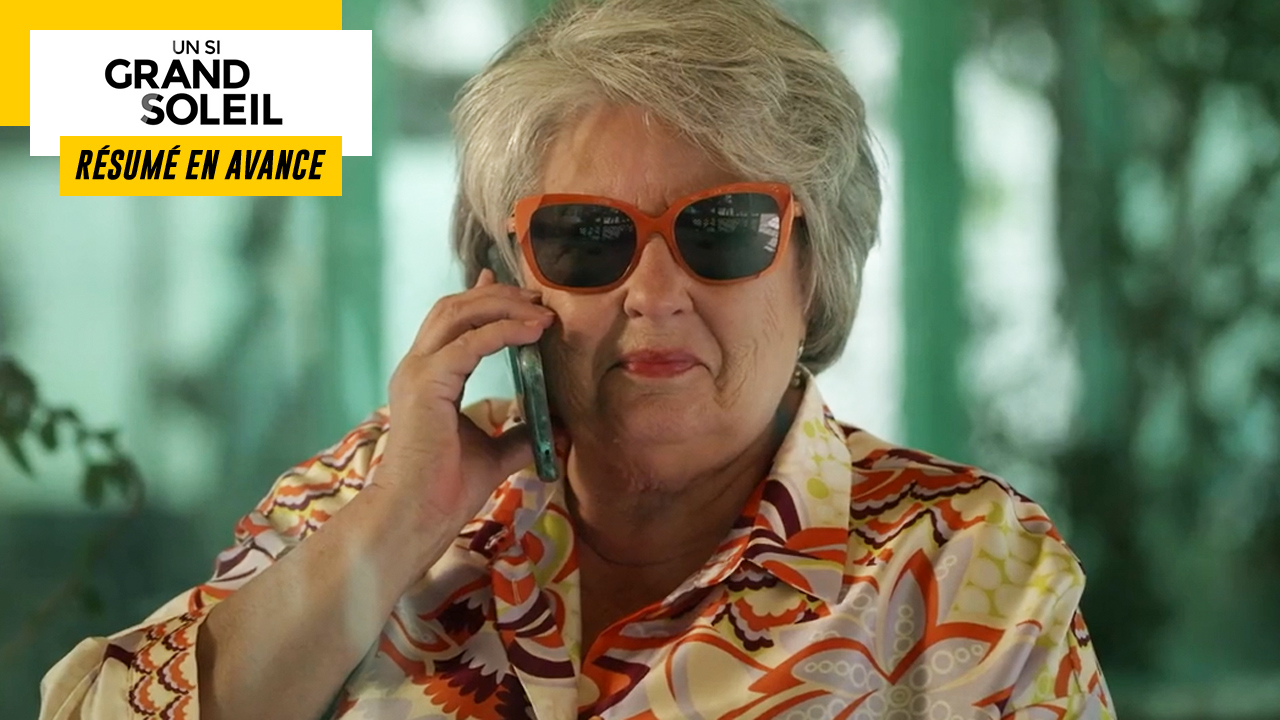 In the next episode of “Un Si Grand Soleil”… While Maryline is moving to Dakhla, Berthier makes a macabre discovery. Christophe is looking for an intern for his firm.

MARYLINE SETS UP IN DAKHLA

In the morning, Maryline calls her son and tells him how happy she is with Paul. Besides, she has realized the obvious and does not want a long-distance relationship. She therefore announces to Gary that she is moving to Morocco. If he first thinks of a joke, Gary quickly understands that his mother is serious. Upset, he struggles to take the news.

Later, Gary breaks the news to his daughter. If the latter is very happy for her grandmother, Gary thinks that her mother has freaked out and wants to make her come to her senses. Inès then makes him understand that Maryline is not irresponsible and urges him to let her live her happy life. As he does not budge, Inès launches that it might be time for him to cut the cord.

Subsequently, the young woman receives a call from her grandmother. Even if she knows that her son and her granddaughter will come to visit her, Maryline is however very moved because she will miss them a lot. For her part, Inès promises to call her every day and then declares that she is really very happy for her. In turn, Maryline assures that her decision was not taken on a whim and that she is really happy with Paul.

Shortly after, Maryline also contacts Ludo and Bilal to tell them the good news. For the moment, she has no intention of selling the roommate and the two young men can therefore stay there until she makes a decision. Although they are happy for her, Bilal and Ludo cannot help but be sad at the thought of never seeing her again.

At breakfast, Marc tells his girlfriend how relieved he is that his son has come home. For her part, Myriam is also happy because she loves Louis very much. As the teenager has planned to spend the evening at the cinema with Kira, Marc proposes a small romantic dinner at home. Only, the director of L. Cosmétiques must finalize the provisional budget with Berthier and will therefore not be back before 10 p.m. Despite everything, Marc is ready to wait.

At the same time, Louis makes his mother believe that he is spending the evening at the cinema, but when night falls, he goes to a gas station and then fills up a can of gasoline before heading to L. Cosmétiques. After hijacking the CCTV cameras, the young man enters the company’s warehouse. As he sprinkles the merchandise with gasoline, he hears a noise.

Meanwhile, Myriam and Berthier are working on the budget. To thank her for accepting the hiring of her assistant, the accountant offers to finish alone and suggests that she go home. Once she leaves the office, Myriam goes to the company parking lot and leaves a message for Marc to let him know that she will be home soon. As she is about to get into her car, she hears a noise and notices that the warehouse door is open. She then goes inside the building.

An hour later, Berthier hears Myriam’s landline ringing. When he picks up, he comes across Marc who is worried that his companion has still not returned. The accountant then goes to the parking lot and discovers Myriam’s vehicle with the door wide open. As the warehouse door is also open, he enters the building, turns on the light and discovers Myriam’s lifeless body lying in a pool of blood…

CHRISTOPHE IS LOOKING FOR AN INTERN

Since the departure of his partner, Christophe has been in a delicate financial situation. This is why he meets Laetitia in the hope of obtaining a loan to solve his cash flow problem. Given the history of her bank accounts, Laetitia promises to see what she can do.

In the meantime, Christophe has to find an intern and posts a classified ad. Shortly after, Charles goes to the veterinary office to meet Christophe. The latter explains to him that he does not have enough to pay a veterinary assistant for the moment because he has just lost his partner and that he must assume the expenses of the practice alone. Although it is badly paid, Charles agrees to assist her.