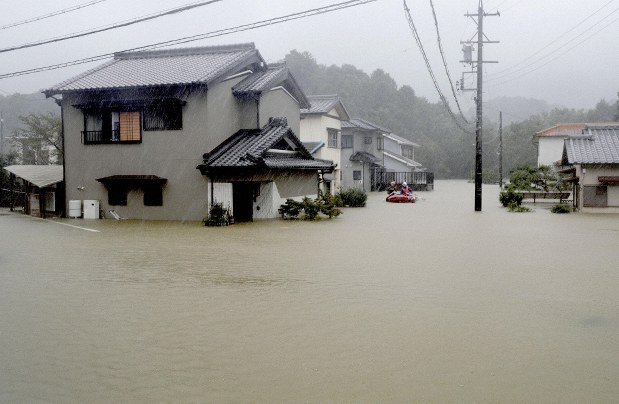 Torrential rain and tornado-like winds are lashing large parts of Japan, as the country endures what could be its worst storm for 60 years.

The eye of Typhoon Hagibis made landfall shortly before 19:00 local time (10:00 GMT) in Izu Peninsula, southwest of Tokyo.

More than seven million people have been urged to leave their homes amid severe flood and landslide warnings.

Train services have been halted, and over a million flights grounded. 1 man was killed in Chiba, east of Tokyo when high winds turned his car.

Thousands of homes lost power in and around the capital, though some were swiftly reconnected.

Japan’s Meteorological Agency (JMA) has warned half a metre of rain could fall on the Tokyo region between midday on Saturday and Sunday.

“Unprecedented heavy rain was seen in cities, towns and villages where the emergency warning has been issued,” JMA forecaster Yasushi Kajiwara told a press briefing.

“The possibility is extremely high that disasters such as landslides and floods have already occurred. It’s important to take action which may help save your own lives.”

‘A blanket and a biscuit’

Residents are now trapped in evacuation centres, attempting to protect themselves from the destructive weather.

James Babb talked to the BBC from a centre in Hachioji, western Tokyo. He said the river near his home was on the verge of overflowing.

“I am with my sister-in-law, who is disabled,” he said. “Our home may flood. They’ve given us a blanket and a biscuit.”

Andrew Higgins, an English teacher who lives in Tochigi, north of Tokyo, told the BBC he had “lived through a few typhoons” during seven years in Japan.

“I feel like this time Japan, normally, has taken this typhoon far more seriously,” he said. “People were out preparing. A lot of people were stocking up”

What else do we know about the typhoon?

Hagibis, which means”speed” in the language Tagalog, is predicted to hit the main Japanese island of Honshu.

Hurricanes, typhoons and cyclones: What is the difference?

It might be the most powerful storm the country has faced since Kanogawa Typhoon in 1958, which left more than 1,200 people dead or missing.

By Saturday afternoon local time, footage and pictures showed many rivers were close to breaching their banks.

Typhoon Hagibis first made headlines due to its disruption of the Rugby World Cup and Japanese Grand Prix. But the effect on the local population is particularly serious.

Locals stocked up on provisions before the typhoon’s arrival on the authorities’ information, leaving supermarkets with empty shelves.

Only last month Typhoon Faxai wreak havoc on parts of Japan, damaging 30,000 houses, most of which have not yet been repaired.

“I evacuated because my roof was ripped off by another typhoon and rain came in. I’m so concerned about my home,” a 93-year-old man told Japan’s national broadcaster NHK, from a shelter in Tateyama, Chiba Prefecture.

Only over 50,000 people took the official guidance to evacuate to shelters, according to the AFP news agency.