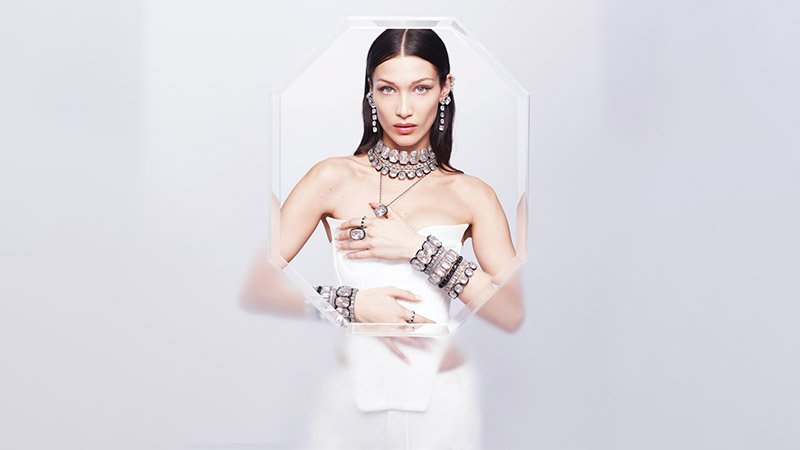 The Met Gala takes over the fashion, and Off-White has a new Artistic Director. Find all of these stories and more as we stay up to date with the top international fashion news of the week.

Bella Hadid is the new face of Swarovski for its campaign, showcasing the multifaceted sides of its crystals. The supermodel appears in several portraits – shot by Mert Alas and Marcus Piggott – each color representing a different side to her personality, such as sporty, sweet, cool, and glam. The choice of Hadid as the jeweler’s ambassador aims to attract Gen Z, as explained by Giovanna Engelbert, Creative Director of Swarovski. “Bella Hadid sums up the individualistic and transformative attitude of a new global generation. She is a multifaceted character who evades the boxes of rules and conformity,” Engelbert said. “She goes from sporty to glamorous while remaining the same girl – the same Bella – with confidence and authority. In that sense, she conveys the values of Swarovski to perfection.”

Bella Hadid shared her enthusiasm for the collaboration. “I was very familiar with Swarovski already. It really is such a timeless and iconic brand,” she said. “I love the new collections and what the brand has been doing, especially these past two years under the creative vision of Giovanna, and I really see Swarovski as the contemporary jewelry brand of the future. Jewelry is about expression and celebrating individuality – Swarovski celebrates all people and the idea of modern glamour, and I love that.”

The Best Looks From the 2022 Met Gala

Held on the first Monday of May, the Met Gala is back in full force. This year’s theme focused on ‘Gilded Glamor’, celebrating the second year of the In America: An Anthology of Fashion exhibition. This theme represented the turn of the century in America, ‘new money’ families, and industrialization-fuelled changes in the fashion industry. In this time of fashion, lace, bright colors, bustles, and decadent embellishments. Some stars stayed true to the theme, whereas others deviated and caught inspiration from elsewhere. Billie Eilish wore a custom ivory Gucci dress, seeking inspiration from the early 20th-century silhouette with a bustle, green lace underlay, and corseted torso.

Blake Lively, who was co-chair, wore a Statue of Liberty-inspired gown from Versace. The gown began as copper, how the statue appeared when it arrived from France in 1885 – soon after, the bow and bustle at the back transitioned into verdigris, the oxidized shade that the statue appears as today. Sarah Jessica Parker wore a Christopher John Rogers checked mid-19th-century gown, paying homage to Elizabeth Hobbs Keckley, the first African American fashion designer for First Lady Mary Todd Lincoln. Kim Kardashian shut down the event by wearing Marilyn Monroe’s 1962 ‘Happy Birthday Mr. President’ encrusted gown, designed by Bob Mackie and Jean Louis. Other standouts included Kid Cudi in Kenzo, Nicola Coughlan in Richard Quinn, and Gabrielle Union-Wade, and Cardi B in Versace.

Off-White has named a new image and Art Director since the passing of its founder, Virgil Abloh. Ibrahim Kamara and Abloh first connected through Instagram, which blossomed over three years until Abloh’s passing. Kamara will work to continue the late designer’s legacy. “In the wake of Virgil’s tragic passing, we have been working tirelessly to keep his legacy alive and the brand relevant as a point of reference and platform in constant evolution,” said Andrea Grilli, CEO of Off-White.

Ibrahim shared his honor and excitement for the role. “Virgil will forever be with us. With me. He changed the world and left an indelible mark on anyone who encountered him and beyond,” he said. “I am honored to further link my ties to Off-White and be a part of the team that will tell the rest of the story Virgil started writing for us all.”

In an unexpected collaboration, GCDS is collaborating with Wolford. The capsule collection features men’s and women’s clothing, including athleisure, which aims to enhance the wearer’s physique. The collection features bodysuits, one-piece suits, shirts, and leggings. The campaign pays homage to Old Hollywood imagery, with models taking part in exercises in an old house with ’70s makeup and hair. “Performance was the keyword from which my Wolford project began. The idea of launching an activewear line with a giant of the sector motivated me enormously,” said GCDS designer Giuliano Calza. “There are more surprises on the way, and I think this collaboration results a perfect fit for both parties.”

6 Best Tattoo Shops In California You Have To Check Out