To make a map is always to make a choice, the choice for example of placing the center of Europe in the middle of the map because we are Europeans, so we can put ourselves in the middle. There is therefore not a map of the world but an infinite multitude. The simple fact of changing your point of view and presto, a new map! They only represent the facts, but by looking at several of them, from different angles, it is no longer them that will change according to our point of view, but our point of view on the world which will change a little according to them. . After the artistic maps, the maps of the world according to the Ricans, and many other maps, the world differently:

1. The map that reverses the waters and the lands

That way, we can see that there is still a lot of water on our good old blue planet.

2. Australia at the center of the world

It’s true that it’s immediately a little less unfair for the Australians who always find themselves lost in a corner of the map.

3. If the world’s population were concentrated in one city

We take all the inhabitants of the planet and put them in a city. Then, we look at the size that this city would be if we apply the same density as Paris, San Francisco, or Huston. You didn’t understand anything? It’s normal.

4. If the Earth had a non-spherical shape

A form of… of what, by the way? We can tell you that if the Earth looked like that, the extraterrestrials would not give a damn about us.

5. The use of different internet browsers around the world

We are not on a big success for Internet Explorer.

6. Who uses what type of electrical outlet?

Admit it, you’ve always wondered. You now have the answer. Thanks WHO ?

7. The planet in the ice age

A good time when you shouldn’t leave your home without your anorak, under penalty of getting a good big family pneumonia.

8. The most popular sports in the world

It’s up to you to find out which country has “archery” as its national sport.

9. The planet according to the most consumed beer brands in each country

No trace of Anosteké which is nevertheless one of the best beers in Europe, and even in the whole world.

With the flag of seum in place of Belgium. We wish them all the best in the world.

So it’s all dark in China where we prefer to use WeChat (because we can’t use Facebook anyway).

12. The Earth with countries that have a size according to the use of their national domain name

A very handy map if you get lost on the internet.

We see some famous faces rubbing shoulders there, but not that of Patrick Sébastien, who deserves it, however.

We at Topito write all our drafts in Cyrillic.

This is an average, so don’t panic, everyone has their own pace. Afterwards, it is true that at 80 it is starting to get a bit late.

16. If the United States were on the Moon

In any case, we already know two or three Americans who are in the moon.

18. The establishment of McDonald’s in the countries

A world map that makes you hungry. Very hungry.

19. Countries that experienced a British invasion

Countries in white are those that have been spared. They are 22. It is not much. 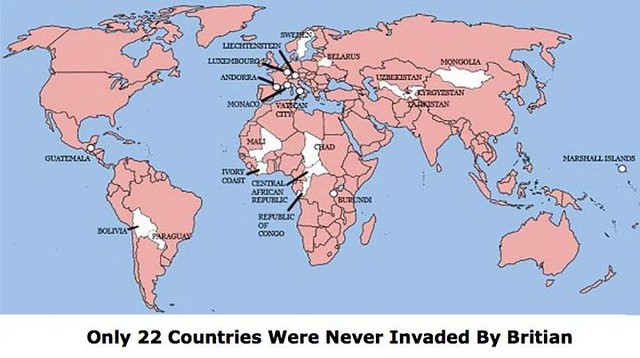 20. The most common surnames in Europe

If your last name is Martin, you are not at all original. But what matters is what’s in your head and in your heart.

Inevitably, when one is located on a pole, that complicates everything.

22. What the great continent of Pangea would be like, with modern borders

With a world like that, the train companies would be very happy.

23. The highest paid civil servants in the United States

You will have noticed, the coaches make a little wheat.

24. The side where you drive in each country

25. The Presence of Corruption in Every Country

We’re doing quite well in France, but it’s not great either.

26. The most consumed types of alcohol around the world

Beer in purple, wine in khaki. So we are in khaki.

This is where we see what happens with the collapse of the Eastern bloc: less vodka, and more beer.

28. The Mediterranean that barely fits in Australia

It’s so pretty it looks like it was made on purpose.

29. The height of trees in the world

It is sure that we do not have the weight with our small birches in front of the sequoias and other giant species whose name we do not know because we are useless in botany.

And it’s always good to know if one day you’re looking for penguins.

31. All solid surfaces in the solar system glued together

Yes it’s not very interesting, and yes it hurts the eyes a little from looking at it, but we don’t know why it’s still intriguing.

32. Countries that have a weapon in their flag

In blue a white weapon, in red a firearm, and in pink both. At least the other countries are warned.

33. Map of places in the world where life expectancy is over 80

We don’t know how the Australians do with their spiders and snakes everywhere.

34. This is where polygamy is legal or not

We say why not, huh, but it has to be both ways then.

35. The number of police officers per 100,000 inhabitants in European countries

The little dark red country with lots of police is Montenegro.

36. Countries in which North Korea has an embassy

Yes it’s weird, and yes now we want to know what they are doing there exactly.

Top 13 tips for recognizing an only child

Top 9 horror stories of birds that killed people, not nice these sparrows

Top 10 of the funniest clashes of the month, episode 16