Top 10 world records held by children, so young and already more stylish than you

There are many reasons to disinherit one’s children. They spend their time screaming, they don’t like Star Wars and you can’t even smoke in your car anymore because “yes-yes it stings your eyes” (proof that 90s kids are survivors). The advantage is that children also have hidden talents and sometimes they can even break world records. We’re already super proud when a Frenchman breaks a record, so imagine if it’s your own child! Be careful, we do not encourage anyone to scam their children like the parents of stars, but it would still be nice to have a celebrity in the family. To inspire your kids, we’ve listed the craziest records held by children (you’ll have to practice).

20 years after the world-famous Tony Hawk’s 900 degree spin, Gui Khury broke a world record with a trick never before performed. Only 11 years old, Gui managed the feat of accomplishing a “1080” on a vertical ramp, that is to say taking off from a ramp to complete three complete turns in the air before landing cleanly and continuing to skater.

2. A 14-year-old American has the biggest mouth in the world.

Isaac Johnson knew he had a big mouth but it wasn’t until 2017 that he realized it could be a record. He is now in the “Guinness Book of Records” as the person with the widest mouth opening (9.34 centimeters between his lower lip and his upper lip). At 14, the boy would now like to use this physical peculiarity to break the record for the most marshmallows in one mouth.

3. 10-year-olds make the longest scoubidou in the world

In a leisure center a few kilometers from Toulouse, the 700 children from the two schools in the city spent a year and a half making the longest scoubidou in the world. In total, more than 10,000 scoubidou were attached to create just one, a 1,679.4 meter long scoubidou.

Henry Cabelus, a 17-year-old American, broke the record in 2017 for the number of consecutive backflips (or backflips) performed on a pogo-stick (or jumping stick). After years of training, the teenager managed to pull off a record 20 backflips in a row. He regularly posts videos of his acrobatics on his Instagram account.

In Ohio, high school students played kickball (a league sport similar to baseball) in a 51-hour game. They collected $10,000 for an association that helps hospitalized children. 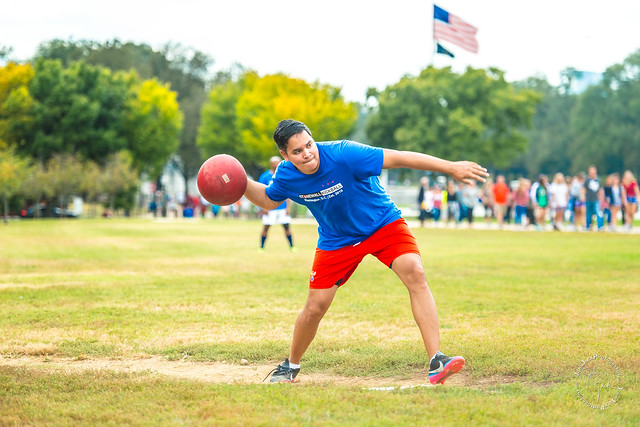 At the age of 7, Seven Wade broke the record for the number of claps in one minute. With 1080 claps, he’s the person who applauds the fastest in the world. He explained that he was intrigued by this record while reading his Guinness Book and wanted to break the record. Regular practice of the drums helped him a lot to learn to maintain a rhythm.

7. The longest rubber band bracelet in the world

8. The longest chain of paper clips in the world

Three years later, this same Ben Mooney broke a new world record at the age of 10. In 2017, he presents the longest chain of paperclips in the world consisting of approximately 66,000 paperclips. Frankly at this point he could have pushed all the way to 70,000.

Katie Borka, 11 years old in 2018, broke the record for the most four-leaf clovers found in 1 hour. She found 166 in her garden in Virginia (USA). She said she has always been very good at spotting 4-leaf clover, which is why she wanted to try to break a world record.

10. He solves 3 Rubik’s Cubes by juggling them

This video has been shot a lot in recent years, it is that of Que Jianyu’s world record. The 13-year-old Chinese teenager solved 3 Rubik’s Cubes by juggling in 5 minutes and 6.6 seconds. This performance took place live on Chinese television in the program “Chinese Dream Show”. If you want to break this record, we gave you the best advice for a successful Rubik’s cube.

Top 15 teachers’ lies that we all believed, hello naivety

Top 10 directors who were broke when they started out, films made in the nick of time

Top 15+ of the best urban agriculture workshops in Paris, a bit of nature in the city

Top 10 reasons to support OM in the Champions League