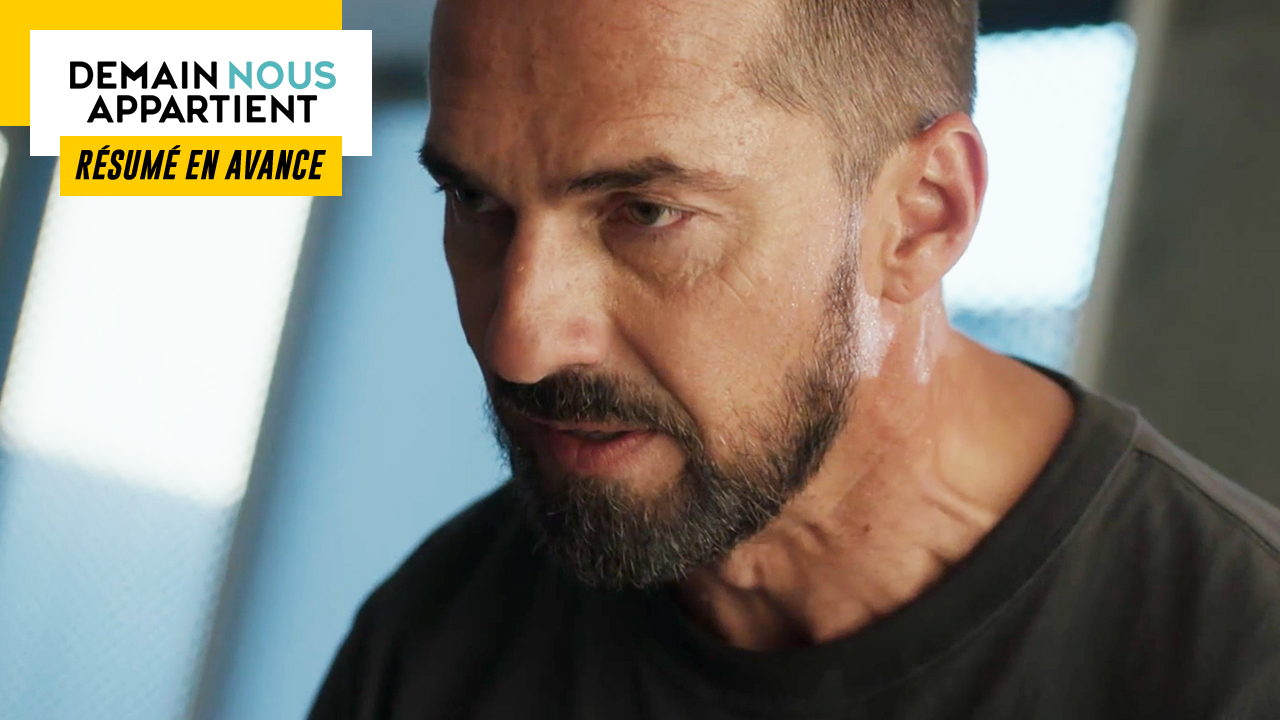 In the next episode of “Tomorrow belongs to us”… Georges tries to defuse the bomb while Gaspard takes advantage of the general panic to help his father escape.

Thursday, August 25 in tomorrow belongs to us…

THE COMMISSIONER IS EVACUATED IN EMERGENCY

The police received a parcel bomb at the police station. Far from suspecting that it contained a bomb, Damien took it in his hands. And that’s when a message told them that it will explode if dropped. Commander Constant decides to believe these indications until they know more. From now on, Damien must absolutely not move for the safety of everyone on site. Martin is then convinced that they will find a solution.

Sara tells them that the deminers have been notified, but Georges knows very well that they will take time to arrive. He therefore decides to examine the bomb more closely, hoping to quickly understand its mechanism. If at first the commander is skeptical, he finally agrees to let him do it. Then, he orders Sara to evacuate the police station and the surrounding buildings.

At the same time, Juliette decides to leave Sète the next day to put some distance between Gaspard and Sacha. She feels that it is time for her son to get away from this town which has already done him so much harm, so that he can rebuild himself elsewhere. For his part, Tristan completely understands his decision, but admits to him that he will miss them. Then, she receives a call from Saint-Clair Hospital telling her of Sacha’s suicide attempt.

The evacuation is underway at the police station. The police rush to recover the most important documents before leaving the establishment while an operational command post (PCO) is set up. As for Georges, he discovered a mechanism which was triggered when he opened the lid of the box. He also thinks that it contains a double trigger system: one linked to the presence of a body and the other which perceives movement. So they understand that if Damien moves a bit or moves his hands, she will explode.

For her part, Sara indicates to the commander the immediate transfer of the detainees to Montpellier and Frontignan. Martin then asks her to come out of the police station to handle the situation from the operational command post and assures her that she is doing very well. As for Damien, he does not know if he will be able to hold out much longer.

At the hospital, William announces to Sacha that they managed to stop the bleeding and that he is now out of danger. He also informs her that a psychiatrist will come to visit her during the day. However, the inmate refuses to see him as he wishes to die. Indeed, his wife and children hate him, he will have a heavy prison sentence and believes that he has nothing left to hold on to. He then asks the doctor to let him die next time but it is not possible. Leaving his room afterwards, William explains to Nordine that they are going to keep him for another day or two under observation before he returns to his cell. When the policeman asks him if he is at risk of reoffending, the doctor considers that it is unlikely as long as he is tied to his bed.

Mona tumbles in front of the security cordon placed in front of the police station. She demands to see her son, but a policewoman refuses her access. Georges’ mother is very worried because her son does not answer his calls. Sara then tries to reassure her but in vain. Mona then continues to insist and says she is ready to go get it herself if necessary. Finally, the policewoman decides to explain the situation to him.

Meanwhile, Juliette would never have believed Sacha capable of doing such a thing and believes that their visit to the visiting room was the trigger. But Tristan thinks his brother never intended to kill himself. According to him, this is one of his new tricks to manipulate them and achieve his ends.

Gaspard is in the hospital and is wearing Benjamin’s blouse which he previously stole some time earlier. The young man decides to turn off his mobile phone when his mother sent him a message. He goes to his father’s room guarded by Nordine when Loïc joins him to warn him of the bomb threat at the police station. Gaspard then hides for a few seconds until the departure of Nordine who wishes to hear from his father. Then, when the other policeman finds himself alone, he repeatedly attacks him with a taser. Once immobilized, he then drags his body inside Ash’s room.

At the police station, Martin loses his temper when he learns that the demining team has just hit the road after an intervention in Lunel. He knows full well that his colleague won’t last much longer with the bomb in his hands. The commander then asks Georges if he can take Damien’s place, which he confirms. The situation is under high tension! They proceed slowly to the exchange and narrowly avoid the worst. After recovering the bomb, Martin orders Georges and Damien to leave the building.

GASPARD PUTS HIS PLAN INTO EXECUTION

At the hospital, Gaspard retrieves the policeman’s keys and removes his father’s handcuffs. Sacha congratulates him, then they tie Loïc to the bars of the bed and gag him. His son then informs him that the police station has received the parcel bomb according to what he heard. Just before leaving the room, the young man seems hesitant, but his father assures him that they will already be far away when the police go looking for them.

Mona is relieved to find her son outside, but her happiness will be short-lived. Indeed, Sara explains to the policeman that the deminers have just left Lunel. Georges then understands that the commander will not last until their arrival and decides to go and check if the bomb does not have a pressure sensor. If so, he thinks he can fool the gyroscope and succeed in relieving it while waiting for reinforcements. Then, before returning to the police station, Georges assures his mother that he is in no danger.

During this time at the hospital, Nordine releases his colleague and leaves without wasting a minute in search of Sacha. For his part, Loïc will warn the police station of the situation, hoping to receive reinforcements.

As Georges begins to open the box containing the bomb, Sara tells them that Sacha Girard is escaping from the hospital with the help of an accomplice. The commander then asks him to send a team to his son as soon as possible, but all the staff are busy evacuating the area. They realize that it is no coincidence that the prisoner is trying to escape right when they receive a parcel bomb.

The situation is complicated in the hospital. Gaspard had spotted a door that leads directly to the car park, but the badge he stole is disabled.

The bad news is linked to the police station. Georges opened the bomb panel and discovered that a timer went off when Damien opened the box earlier.

If Gaspard didn’t have a backup plan, his father would sound the fire alarm hoping to be able to mingle with the crowd during the evacuation. Unfortunately for them, it is Christelle who takes care of the operation and she has already seen the young man in the morning.

THE BOMB WILL SOON EXPLODE

Finally, Georges admits to the commander that a timer has started, but he hides from him that they only have 8 minutes and 50 seconds left before the explosion.

At the same time, Gaspard realizes that the fire alarm has unlocked the door leading to the parking lot. However, they are stopped by Nordine who orders them not to move. But Sacha has nothing more to lose and threatens him with a gun. When Bénédicte suddenly leaves a room, the prisoner grabs her by the hair and takes her hostage.

Finally some good news from Martin and Georges: the policeman has managed to free the gyroscope. The commander can place the bomb on a chair but must still keep his hands on it. They then receive a call from Sara telling them that the deminers will arrive in seven to eight minutes. However, Georges knows it, it will not be enough… He admits to her that there are less than five minutes left on the countdown before the explosion of the bomb. The two colleagues start arguing because Martin wants his comrade out of the police station, but he refuses. He thinks he can defuse it on his own.

The situation is very tense in the hospital. Nordine tries to reason with Gaspard when Benjamin opens the door that leads to the parking lot and disarms Sacha. Unfortunately, the young man recovers the weapon first and then gives it back to his father. If Bénédicte is safe and sound, Benjamin takes a blow to the back of the head. The prisoner and his son break the security system of the door. Then before leaving, Sacha warns the policeman: if he follows them, they will cause carnage. The osteopath tells Nordine that another door also leads to the parking lot. The policeman then decides to go after them.

The deminers arrive in two minutes at the police station. For his part, Georges isolated the two pilot sons. If he cuts the good, he defuses the bomb. If Martin persists in asking him to leave, his colleague refuses to back down because too many people have died when he didn’t know how to react when he was with Vanessa. But the commander tells him that this whole story was not his fault and explains to him that he does not need to die to prove that he is a very good policeman. Georges knows that the deminers will not arrive in time. The seconds go by at full speed, they only have a handful of seconds left when Georges cuts one of the two threads.