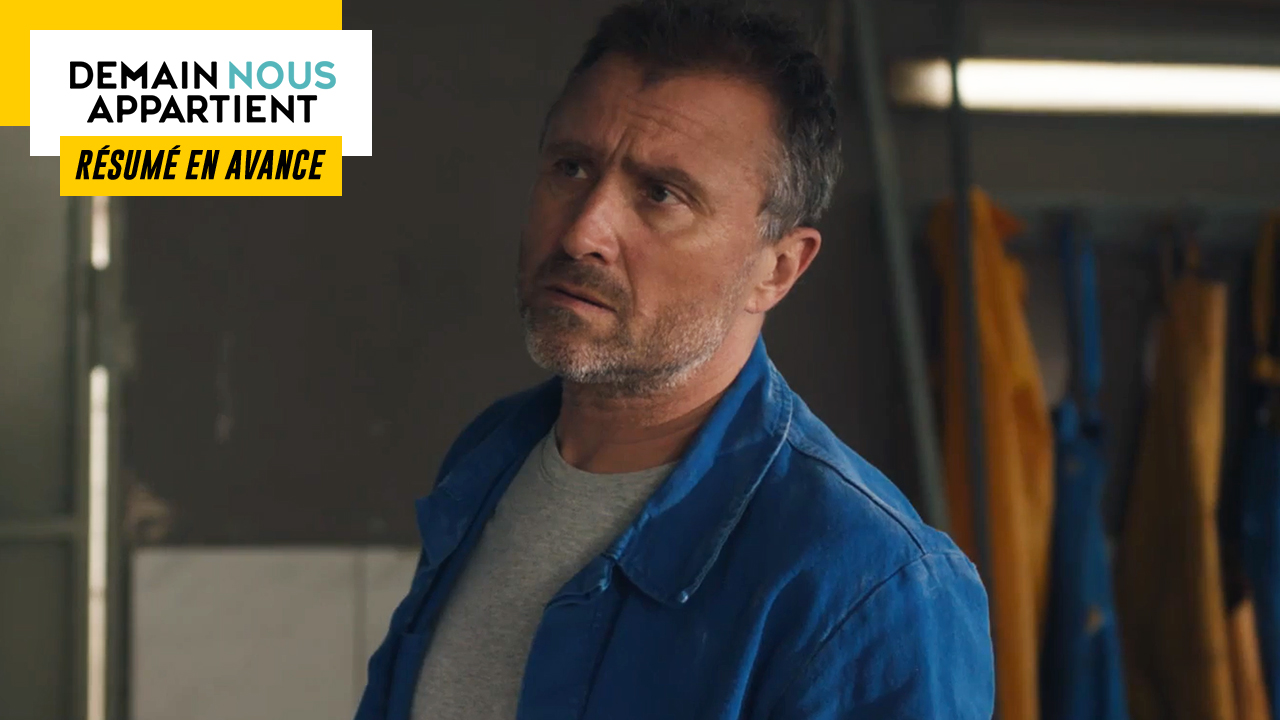 In the next episode of “Tomorrow belongs to us”… Alex is attacked at the Mas and Raphaëlle turns the page. As for Sofia, she didn’t tell her parents everything.

Wednesday, June 29 in tomorrow belongs to us…

ALEX GETS ATTACKED AT THE MAS

Georges goes to the Mas and informs Chloe and Alex that the cooler has been hermetically sealed to make sure it explodes. It is therefore a malicious act. At this time, the police have no suspects. He asks the couple if they’ve received any threats recently, but they haven’t. The policeman questions them about Jordan and Noa manning the bar during the inauguration, but Alex comes to their defense. As for Chloe, she admits that Noa has been a bit on edge lately, which doesn’t mean he has anything to do with the explosion. Georges intends to question them again and leaves with the list of guests present during the drama. The culprit’s name may be on it.

At the hospital, Renaud announces bad news to Karim: the blade of the knife has cut into the nerve plexus of his arm quite deeply. All the nerves in the shoulder have been damaged, which explains why he no longer feels anything. Karim fears for his career, he refuses to finish behind a desk. The doctor suggests that he try a microsurgery operation: this would restore nerve flow in the arm. However, if he accepts, the surgery must take place as soon as possible because they are playing against the clock. For her part, Anna is very worried. She knows that carrying out two operations in less than 48 hours can be dangerous for her partner. The doctor does not hide from him that the chances of finding a nervous flow are diminishing every moment. Karim refuses to wait any longer and agrees to have an operation as soon as possible by Dr. Perrin, one of the best neurosurgeons in the region.

At the same time, Georges interviews Jordan at the police station. The young man continues to proclaim his innocence and explains to the policeman that Noa made the cocktails while he served the guests. He thinks his colleague has more reason than him to blow up the cooler. Jordan tells him that Noa hates him because he is convinced that something is going on between Judith and him, which is not the case. According to Georges, his story does not hold water, he thinks that Noa would have attacked him directly and not the Mas in which he works. But Jordan has a hypothesis: Noa took it badly to have lost his mas and to have to work with his ex-girlfriend. The young man reiterates his innocence, he is really happy to have found this job. Georges decides to let him go and asks him to remain at the disposal of the police.

For his part, Martin questions Noa in his office. The commander thinks he had his reasons for resenting the Delcourts and points out that it must be difficult to work with his ex-girlfriend. The young man admits that he is disgusted with the way Judith treats him after what they have been through. He resents her, but not enough to blow up the bar. Noa accuses Jordan: he knows he hates him and does everything to go with Judith. After all, Jordan could have orchestrated everything to frame him. He claims to be innocent.

Bart visits Karim in the hospital. He just came back from the recovery room. Anna explains to him that the second operation went well. However, the lieutenant still can’t move his hand. But according to the doctors, his mobility will gradually return. In the meantime, his hand needs rest for at least two months. Bart puts the blame on Judith whom he considers responsible for having wanted to serve molecular cocktails. Karim comes to the defense of the young woman: it’s not her fault that the cooler was trapped.

Later, Georges went through the list of guests at the inauguration of the Mas, but found no potential suspects. The demarcation of the telephones has also given nothing for the moment. So either that person came without their phone and mingled with the guests, or they were part of the party. Jordan or Noa remain the strongest lead for the police. Martin and Georges note that Noa has a motive: to want to sabotage her ex-girlfriend’s party. However, they lack physical evidence to link him to the explosion and take him into custody.

At the Mas, a news comes to upset the service: an online article relates the explosion and speaks of criminal negligence. Judith questions the quality of the information that comes from a dubious site “News soleil du midi”. Alex is worried about their reputation because they’ve only just opened. Moreover, this person did not stop at the accident, because it also questions the quality of their oysters. Judith proposes to her parents to publish a denial and to explain that the inauguration was sabotaged. But Chloe thinks it would be even worse in terms of image.

Noa read the incendiary article about the Mas. According to him, you have to let it slide and wait for it to settle down. Alex has the feeling that the young man does not feel concerned by all that is happening. Noa braces himself, he thinks his boss is accusing him of being involved in the sabotage of the cooler. Even if Alex assures him otherwise, the young man decides to leave the Mas.

A little later, Alex hears a noise outside the Mas. He decides to go and see what happens when someone knocks over a pile of garbage cans. Alex collapses.

SOFIA DIDN’T TELL HER PARENTS EVERYTHING

Aurore and William confront Sofia about the swimsuit campaign she did during her internship in London. The young woman apologizes because she did not think that the photographs would arrive in France. She wanted to talk to them about it, but she knew they would react badly. William is dismayed as his wife thinks their daughter is of age and free to make her own choices. After all, the photos are sexy, but not shocking admits Aurore. For her part, Sofia does not regret this experience at all and she has the right to decide what she does with her body. Thanks to this shoot, she earned several thousand euros in a single day. Her father is not at all convinced by her arguments and hopes that she does not intend to pursue a modeling career. Sofia replies that it is not a shame to do this job and is disappointed that her father still treats her like a child.

In the hospital, William is still brooding over the photos of his daughter. Samuel does not understand what is bothering his friend, Sofia is pretty and takes advantage of it. Victoire also came across the “Kool Swim” campaign on social networks and finds the young woman magnificent. She thought that William would be proud of his daughter, but that’s not the case at all: he refuses to allow his daughter’s body to be treated like merchandise. Immediately, Victoire contradicts him, his approach is on the contrary very feminist. William, however, is sticking to his guns. He believes that a woman does not need to show her body to be respected.

Later, Samuel reunites with Sofia. He tells her that he is very proud of her. His daughter confesses to him that she does not want to make it her job, contrary to what she let it be understood in front of William. If she has earned a lot of money thanks to this shoot, Sofia intends to put it aside for the moment for personal projects.

Sofia is on the phone with a man she is supposed to meet next week. Manon is already in on the secret and advises him to tell the truth to their parents. However, her sister refuses: she thinks that by putting them on the fait accompli she will have a chance that they will accept her relationship. For her part, Manon fears that her relationship will sow chaos in their family. Her sister reassures her, at first it will probably be difficult, but things will settle down eventually. Sofia can’t wait until next week.

Maud is in a good mood this morning, but that’s not the case for Camille and Raphaëlle who haven’t slept much. Camille explains to her sister that she had a horrible nightmare: she saw the moment when she stabbed Stanislas over and over again. She decided to join their mother who stayed close to her until she calmed down. Raphaëlle thinks that Camille’s return home has awakened memories. To console her, Maud offers her sister to go for a walk later to clear her mind, which she accepts. She also admits to being very admiring of his courage.

Raphaëlle asks Maud for a favor: to help her get rid of Stanislas’ things. She should have done it alone, but she doesn’t have the strength. Her daughter reassures her: it’s the best thing to do. From tonight, it will be as if he had never existed. The mother and daughter put all of Stanislas’ belongings in garbage bags in front of their house. They decide with Camille’s agreement to give everything to an association. Thus, Stanislas will have done at least one good thing in his life.

Later, Raphaëlle goes to the Spoon and apologizes to Audrey for all the harm she has done to her. The waitress does not blame her: she was under the influence of Stanislas. The lawyer hands her a box with Beaumont items to give to Leo. Audrey thanks her, but she intends to wait until her son is a little older to give it to him. She advises Raphaëlle not to feel guilty for what she has done, after all, she is also a victim in this story.