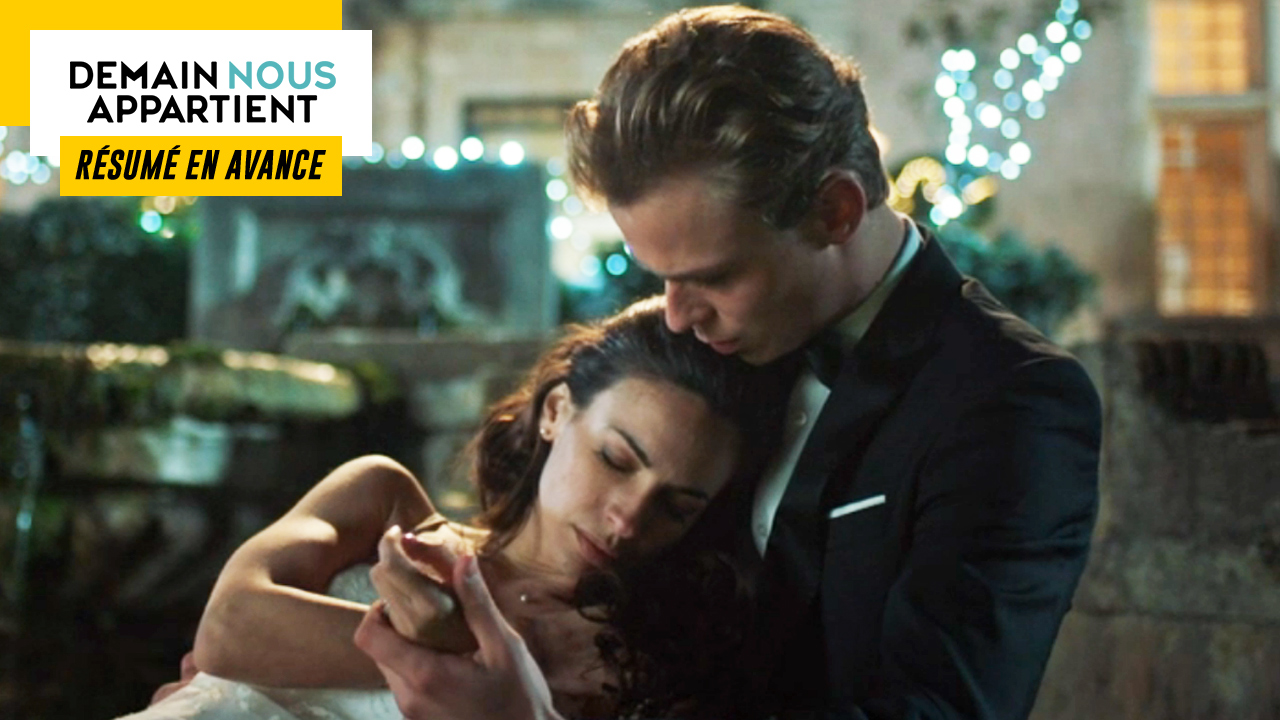 In the next episode of “Tomorrow belongs to us”… As Bart and Louise’s wedding day has finally arrived, a tragedy occurs. At the same time, Stanislas lies about Dorian, and the relationship between Victoire and Samuel becomes electric.

Friday, May 13 in tomorrow belongs to us…

Louise is poisoned on her wedding night

It’s the big day for Bart and Louise, and each of the bride and groom is getting ready on their own.

At the Delcourts, Bart puts on his costume under the emotional gaze of Anna and Chloé. The young man adds the final touch: a black bow tie sent from the United States by Maxime, who regrets not being able to attend his cousin’s wedding. Chloé takes a picture of Bart and Anna and sends the picture to her son, while Bart leaves a voice message for Maxime to thank him. Before leaving to phone Flore on this very special day, he once again shows his gratitude to Chloé, without whom such a wedding could never have been organized so quickly.

Louise and Mathilde, for their part, are overjoyed: they find Aurélien and Gary, who have returned from Greece for the wedding. Aurélien is delighted to see his mother marry Bart. Gary, meanwhile, thanks his ex-wife for the invitation and assures that he wishes her the best and regrets her past behavior.

Later, in the beautiful grounds where the ceremony will take place, Chloe, Alex, Tristan, Vanessa, Audrey, Lizzie, and Jordan complete the final preparations for the wedding, from decorating to receiving champagne. Audrey and Mathilde then help Louise finish dressing. In order for Louise to respect tradition by wearing something new, old, borrowed, and blue, Audrey lends her her earrings and discreetly hides a small blue figurine in the bride’s bouquet.

The guests are already gathered in the estate’s garden when Bart and Louise finally arrive in a car decorated for the occasion. They cross the aisle to applause and then join their loved ones to listen to Lizzie sing “The whirlwind of life”, accompanied on guitar and backing vocals by Jack, Jordan, Audrey and Damien.

But what everyone doesn’t know is that someone has just poured digitalis into one of the champagne glasses. Once the song is over, Bart addresses a few words to the assembly, before everyone raises their glass to celebrate the love of the young couple. And without suspecting the danger hanging over them, Bart and Louise take a sip of champagne.

In the kitchen, Tristan pushes Vanessa to take a break. He offers her a champagne toast and insists that she finish her glass.

Just before dinner, Louise makes a very nice speech in which she remembers her meeting with Bart and confesses to him that she hopes to go a long way with him. The newlyweds then open the ball, followed by Chloé and Alex, and Audrey and Damien. Anna is very moved.

While dinner is in full swing, Bart cannot find Louise and sets out to find her. Chloe saw the bride talking to Gary in the garden. Bart therefore joins his wife outside and finds her sitting on a low wall, alone in the middle of the night. Louise does not feel well, she is struggling to breathe.

Bart wants to call Marianne, but Louise asks him not to leave her. She lays her head on the shoulder of her husband who tries to reassure her. But quickly, Louise no longer reacts. Is she still breathing? Bart begins to scream for help while “The whirlwind of life” sung by Lizzie sounds again…

At breakfast, Camille asks her mother’s permission to invite Dorian to dinner. Raphaëlle obviously accepts, and Camille explains to Stanislas that Dorian is, like him, a great navigator who has already sailed around the world several times. She’s sure they’ll have plenty to talk about.

In high school, Camille makes Dorian walk and has fun putting pressure on him about the evening dinner. After all, these are the official introductions with his mother’s new companion.

In the evening, the current goes very well between Stanislas and Dorian who are constantly talking about navigation. Raphaëlle then accepts that Dorian spends the night here, but once alone with his companion, Stanislas advises her to be wary of Dorian.

He makes Raphaëlle believe that he caught Dorian exchanging messages with a girl. He adds that he’s sure this girl isn’t just a friend to Dorian. Raphaëlle can’t get over it and thinks of Camille. She intends to tell her daughter about it, but Stanislas insists with Raphaëlle that Camille does not know that it comes from him.

The relationship between Victoire and Samuel becomes electric

Reading the newspaper, Samuel realizes thatUntouchables go back to television that evening. A news that delights him, just like Victoire who then remembers the first time that she saw the film, when it was released in 2010, in the company of her boyfriend at the time.

Samuel points out to Victoire that she is wrong: Intouchables was released in 2012. He is sure of it because he saw the film in preview that year. Audrey Fleurot was even sitting next to him in the room. Victoire doesn’t budge: it was good in 2010. This annoys Samuel who knows full well that she can’t stand being wrong.

Fortunately, the arrival of William puts an end to the debate: a search on the internet allows him to be able to say with certainty that the film with Omar Sy was released in… 2011! Victoire and Samuel were both wrong.

Later, it starts again in the hospital. Samuel and Victoire disagree on a prescription for a patient with hyperthyroidism. Samuel then proposes a deal with his companion: the one who is wrong will have to obey the whole evening and the whole night to the one who is right.

Once again, Samuel and Victoire seek William’s opinion to decide between them, assuring that the health of a patient is at stake. William then sides with Chardeau, to the chagrin of Victoire who has a bitter defeat.

Victoire then meets Soraya at the Spoon for a drink. She regrets that Samuel can’t stand being wrong, and Soraya then points out to him that she is like him. Mona, who passes by, overhears their conversation and understands that all is not well between the two lovebirds. For her, it’s a story of astrological sign: an Aries and a Taurus, it’s the worst association in the world. Because Victoire and Samuel are both proud, horribly stubborn, and completely control freak.

When the evening comes, as agreed, Victoire is forced to obey Samuel’s whims. She massages his back, then his feet, and the situation doesn’t really amuse him. When Samuel offers her a hug to reward her, Victoire refuses and reproaches Samuel for having transformed this betting story into an old perverse trip. And since Samuel doesn’t seem to understand how degrading it is, Victoire sends him to sleep in the guest room.